Defying the Nazis: The Sharps' War on PBS is Don’t Miss TV 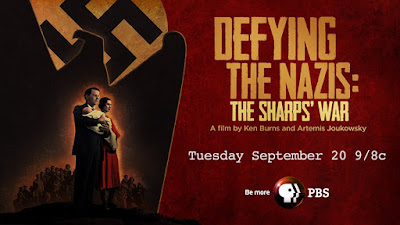 Back in April of 2013 I was proud to bring a documentary film called Two Who Dared: The Sharps’ War to the Tree of Life UU Congregation in McHenry.  The film told the largely unknown story of a young Unitarian minister and his wife, Waitstill Sharp and Martha who left a family and safe, familiar life behind to heed a call to aid refugees in Europe.  They were soon risking their lives and conducting cloak-and-dagger daring-do to rescue the otherwise doomed targets of Nazi oppression.  It was part of a nationwide rollout of the film as it was shown mostly in UU churches and to organizations dedicated to remembering the Holocaust.
It was the hope of the producers and the Sharps’ grandson Artemis Joukowsky, who was relentless in researching their lives and brining their story to life, that the film might be picked up for independent distribution.  Maybe there was a glimmer of dream that it might even get an Oscar Best Documentary film some time.  More realistic was the hope that it would get picked up by PBS and maybe be shown on their prestige documentary series Frontline.
It didn’t quite work out that way. Two Who Dared was a fine film, but it was made on a relative shoe string.  The story it was trying to tell was too big for its restraint.  PBS, it turned out, was interested in the story, just not in that version of it.  Enter Ken Burns, America’s most honored and esteemed documentarian with a long association with public television and armfuls of Emmys and Peabody Awards.
It turns out that Joukowsky, a successful venture capitalist and an activist on behalf of the disabled—he has Spinal Muscular Atrophy—and Burns were already acquainted through Joukosky’s No Limits Media which produced films on, by, and about the disabled.  Burns wanted to bring the story to PBS.  He signed on as producer, executive producer, and presenter.  He put his full documentary shop at the disposal of Joukowsky who signed on to direct.  Together the collaborated on a 90 minute film that will premier tonight on many PBS stations including Chicago’s WTTW.


Tom Hanks and Marina Goldman, a certified nurse practitioner, healthcare activist, actress, and film producer, lend their voices to Waitstill and Martha Sharp.  Drawing on source material including letters, journals, reports to the Unitarian Service Committee, and personal photos as well as archival footage, and the recollections of some of the people the couple saved and of the young children they left behind in America, the film is the equal of any Hollywood thriller.

Joukowsky’s accompanying illustrated book will also be available in book stores nationally today and can be ordered, from PBS.


This is the story the film and book will tell.
After seventeen ministers declined the American Unitarian Association’s request for relief volunteers in Europe, the Rev. Waitstill Sharp and his wife Martha committed to the dangerous undertaking. They left their two young children in Wellesley, Massachusetts and traveled to Czechoslovakia. In order to enable the clandestine transportation of refugees, they battled political and social blockades, broke laws to get imperiled individuals exit visas, and laundered money on the black market. Over the course of two missions—Prague in 1939 and Southern France in 1940, the Sharps, and their underground confederates played a vital role in saving thousands from persecution.

The letters of transit which were the McGuffin in the film Casablanca did not really exist, but those were the kind of documents that the Sharps begged, borrowed, stole, or forged at great risk to help refugees escape war torn Europe.

While Waitstill often managed the complex and difficult administrative processes to secure and distribute relief as well as keep the Nazis at bay,  Martha turned out to be a daring field operative risking her life time and again.  As a noose was about to descend on them, she shepherded a last minute daring flight of Jews and intellectuals on a train that had to cross Germany to reach safety.  Waitstill made his way separately.

After a short respite at home they couple was sent to southern France where they struggled to provide basic food, clothing, and milk for infants to the refugees flooding unoccupied Vichy France from Paris and other areas under Nazi direct domination.  As the Nazis pressured the Vichy government to round up their Jews, Martha gathered a group of endangered children, most of them school girls, and led them on a perilous trek that included crossing the Pyrenees on foot to get to officially neutral but ideologically hostile Spain and eventually brought them to New York on an ocean liner that narrowly avoided being sunk by a U-boat.

After the war Waitstill returned to Europe to manage refugee relief efforts for the Unitarian Service Committee.  Martha became an outspoken activist who ran for Congress against the Chairman of the House Un-American Activities Committee and was smeared as a Communist dupe or sympathizer.  She steadfastly continued to work to help Jewish refugees get to the U.S. or Israel and her experiences made her an ardent champion of the new Jewish state.

Long separations and Martha’s refusal to resume the quiet life of a minister’s wife, eventually led to the breakdown of Sharp’s marriage.  Waitstill took up the pulpit of a Chicago congregation and remarried.  Martha continued her outspoken activism for the rest of her life.

Because of their actions to save Jews, the Sharps were named Righteous Among the Nations by Yad Vashem, Israel’s Holocaust memorial and museum. They are two of only three Americans to be so honored.

In a world once again awash in refugees and tyranny the story of the Sharps’ selflessness and resolute determination refuse to let it be someone else’s problem has many lessons for all of us.  Their memory challenges us all.