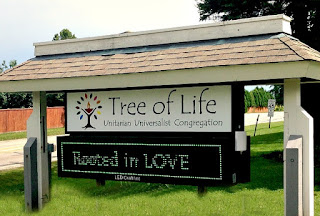 Note—One of the things that I do is provide volunteer public relations services to my church, the Tree of Life Congregation in McHenry, Illinois along with other worthy local non-profits and activist groups.  Although this blog now has a readership far beyond the bucolic confines of Chicago’s far Northwest boonies, I still post many of the releases to my blog which has a small, but loyal local following.  Those folks in Timbuktu, Katmandu, and other far flung locals who monitor this space for its quirky historical features, cheesy poetry, or occasional political harangues may be mystified by the once-in-a-while plugs for our Coffee House, some fund raiser, or a social justice action.  So be it.  I keep doing it because I love my church, its people, and what it stands for and I even have a sense of evangelical mission about it, although Unitarian Universalists generally shun that as unseemly and rude.  And I enjoy it…usually.
But once in a while a press release is hard to write, believe it or not.  Take the one below.  It was emotionally draining because the topic made me sad.  I was and am a fan of the Rev. Sean Parker Dennison, although I recognize he is not perfect.  No minister is.  We have had frank conversations in which I appealed for certain changes.  That’s how healthy relationships work.
I was heartbroken that this give-and-take in some way broke down in our community.   Don’t ask me how.  I was not privy to the details.  I am sure there was some blame to go around.  But it is what it is.   Now both the Congregation and Rev. Sean need to heal and move forward.
Someday I may opine on certain UUA ministerial policies and guidelines that seem to me to cut off normal human relations and leave ministers isolated with no good personal support they can call upon to sustain them through the dark nights of the soul and routine challenges of herding UU cats.   These policies and guidelines are in place to supposedly encourage even handed objectivity, discourage favoritism and clique building, and as a fire wall against any perception of romantic or sexual impropriety.  I understand that.  But like many well-meaning regulations, they have become strait jackets and are inhumane.  End of brief rant.
For now, Blessing upon us all…

The Rev. Sean Parker Dennison has announced his resignation as minister of the Tree of Life Unitarian Universalist Congregation, 5603 Bull Valley Road in McHenry.  His last sermon, Heading Toward Hope and Healing will be delivered this Sunday, October 2 at 10:45 worship.  He will be honored by a reception by the Congregation following the service.
Dennison was called to the congregation in 2012 shortly after it moved from its longtime Woodstock church building.  His ministry has been noted for sensitive, high quality preaching, expanded inclusion of performing arts in worship, compassionate inclusiveness and an urgent sense of justice, for denominational leadership, and for mentoring ministry students.
In a letter to the congregation earlier this month Dennison wrote, “The decision to resign has taken considerable thought and consultation with the Board, the Mid-America Regional staff, and many mentors and colleagues.  These conversations have convinced me that it is best for me and the congregation that I resign.”
In her letter to the Board President Barbara Fleming wrote, “Though this development will inevitably cause changes within our congregation, we are confident that we can weather this storm together.”
Going forward the Worship Arts Committee will plan and present lay led services with the assistance of Religious Education Director Sam Jones and Music Director Forrest Ransburg.  The pulpit will also be open to guest ministers.  Over the next months an interim minister will be selected to guide the congregation through the search process for a new called minister, a process that can take a year or more.
Also leaving the congregation will be the two intern ministers, Michelle Lattanzio and Misha Sanders, students at Meadville-Lombard Theological School in Chicago.  They were beginning their second year with the congregation but must have ministerial supervision.  They will finish their internships at other near-by congregations.
For information about upcoming services and other Tree of Life plans and programs, contact the office at 815 322-2464, e-mail  office@treeoflifeuu.org  , or visit http://treeoflifeuu.org/ .