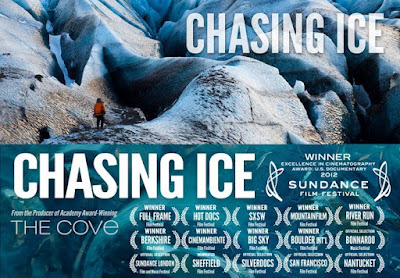 The Green Sanctuary film series returns after a hiatus with a showing of the 2014 Emmy winning film for News and Documentaries Chasing Ice at the Tree of Life Unitarian Universalist Congregation, 5603 Bull Valley Road in McHenry this Friday, February 24 at 7 pm.
James Balog, a skeptic about climate change headed to the Arctic with a band of young adventurers on assignment with National Geographic. The trip opened his eyes to the biggest story in human history. Balog deployed time lapse cameras across the Arctic to capture the changing landscape, delivering evidence of climate change and hope for the future.
The film has won armfuls of awards.  In addition to the Emmy it was the Sundance Film Festival Excellence winner for Cinematography Award of a US Documentary, the Doc Impact Award celebrating documentary films that have made the greatest impact on society, the Environmental Media Award for Best Documentary, as well as Best Documentary and/or Audience Favorite awards at more than a dozen other film festivals.  The song Before My Time by J. Ralph and performed by Scarlett Johansson and Joshua Bel from the soundtrack was nominated for an Academy Award.

The Green Sanctuary Committee represents the environmental ministry of Tree of Life Unitarian Universalist Congregation and combines education, stewardship, and activism.  Its name comes from the Green Sanctuary certification the Congregation has earned for its commitment to environmental justice from the Unitarian Universalist Association (UUA).
The screening of the film will be followed by an open discussion facilitated by Andy Myers and Marcia Johnson.
The evening is free and open to the public.
For further information contact Andy Myers at andrea-g-myers@hotmail.com  or Marcia Johnson at marcia.johnson1966@gmail.com .