Note—When a version of this was posted two years ago American novelist Sinclair Lewis was at the nadir of his literary reputation.  Events have changed that.  Quotes from his prophetic but long overlooked novel It Can’t Happen Here began appearing as Facebook memes.  Like George Orwell’s 1984, the curious have been seeking out the book and discovering the author.  But while Orwell’s tale is chillingly effective, Lewis deeply understood things about the American character.  He would not be at all surprised by the rise of Donald Trump.  Hell, he could have written Trump and very nearly did.  Lewis deserves this moment.  And I urge you to look him up and read him!
It’s a big day for literary birthdays including Charles Dickens in 1812 and Laura Ingles Wilder in 1867.  I bet you’ve read their books.  I bet you haven’t read one by another birthday boy, Sinclair Lewis.  He was supposed to be The Great American Novelist of the 20th Century.
Lewis was born and raised in Sauk Centre, Minnesota on February 7, 1885 to an autocratic physician father who made his sensitive third son’s life miserable.  His mother died when he was when he was only six.  His father remarried, but his new wife was not a wicked stepmother—she gave the boy attention and affection that he craved and encouraged his avid and wide ranging reading.
A gangling, red head with a bad case of acne he was mocked at school.  He fell in love with all of the pretty girls but was too awkward to do anything about it or rudely rebuffed.  To escape the torment and in hopes of finding like-minded bookish companions Lewis enrolled at Oberlin Academy, the prep school of the liberal Ohio college.  He was already writing—Walter Scott inspired tales of knights and daring do and romantic poetry.  He adopted high flown verbiage in his speech in an attempt to seem less provincial.  All of this elicited the same ridicule as he faced back home.
Despite finding solace in contributing to the Yale Literary Magazine when he entered that university, he made few friends and remained a social outcast.  Several times he abandoned his studies in search of adventure or at least something better.  He sailed to England on a cattle boat, went to Panama to work as a common laborer on the Canal, he lived and worked as a janitor at Upton Sinclair’s socialist commune Helican Hall, and spent time in Greenwich Village trying to make a living as a free-lance writer.  It was there he joined the Socialist Party and met Jack London, to whom he would later sell ideas for short stories.
But he always returned to Yale and slowly earned his bachelor’s degree and then completed his masters in 1908.
After graduation Lewis became a sort of literary vagabond bouncing around to jobs as editing small magazines and work for publishing houses in Iowa, San Francisco, and Washington D.C.  He spent some time at a writer’s colony at Carmel-by-the-Sea in California.  Then it was back to New York and the Greenwich Village scene where he ran in circles that included radical journalist and founding member of the Provincetown Players Jack Reed.  All the while he was turning out facile short stories for popular magazines in a variety of genres for fast cash while working on more serious projects.  More importantly, he was absorbing the throbbing life of a rapidly changing America.
Lewis was nothing if not prolific.  In 1912 he published his first novel a quickie in the Tom Swift style, Hike and the Aeroplane published under the nom de plume Tom Graham.  In 1914 he published his first serious novel under his own name. Our Mr. Wrenn: The Romantic Adventures of a Gentle Man, a rambling, whimsical tale of a meek novelty company salesman who throws over his job when he receives a small inheritance and goes traveling.  It received mostly positive reviews but was not commercially successful.

The same year he married a figure in the New York literary scene in which he was now traveling, Grace Livingston Hegger, an editor at Vogue.  The couple had a son who they named Wells in honor of the British writer and Socialist H. G. Wells.  He was working as an editor and advertising manager at the publisher George H. Doran Company.  On the side he started a syndicated book review page for smaller newspapers around the country that met with some success.  As a bonus he found that the writers he mentioned and reviewed favorably were inclined to return the favor and review his books.
After 1916 Lewis emulated the model of his character Mr. Wrenn and quit his regular employment to travel with his wife and dedicate himself to his writing.  In addition to continuing to supply short stories to magazine, he alternated serious novels like The Trail of the Hawk: A Comedy of the Seriousness of Life and The Job and pot boilers expanded from romance serials he had previously published in magazines.

Lewis and his family settled in Washington where he began work on the novel that would finally win him the wide-spread approval and fame he had so long chased.  Main Street was published in October of 1920.  The fictional Minnesota town of Gopher Prairie was drawn from his home town of Sauk Centre.  The protagonist, Carol Milford, was a carefree, spirited, and cultured young woman from the relatively sophisticated city of St. Paul who marries a small town doctor.  She was drawn from Lewis’s beloved step mother but was also a female version of himself, down to a face scared by acne.
The realistic but unflattering depiction of small town American life not as a Tarkingtoneque rustic utopia, but as a stultifying, small minded place demanding soul crush conformity turned out to be a huge success beyond its author’s wildest expectations.  It sold an astonishing 250,000 copies in the first six month alone and royalties made Lewis rich, eventually mounting to over $3 million dollars.
Main Street was selected for the 1921Pulitzer Prize for Fiction but the Pulitzer Foundation’s horrified Board of Trustees overturned the jury selection and gave the award instead to Edith Wharton for The Age of Innocents.  Lewis was so enraged that when he was awarded the prize in 1925 for Arrowsmith he curtly refused to receive it.
Babbit, published in 1922, was a comically sour portrait of a crass businessman and civic boosterism that added a new word to the English Language.  The setting of Zenith was a larger, more bustling version of Sauk Centre/Gopher Prairie and would continue to be used by Lewis in future work.  Arrowsmith was about the corruption of an idealistic doctor.
Success and both Lewis’s compulsive dedication to his writing and increasingly heavy drinking led to the break-up of his marriage in 1925.  Three years later he married noted political journalist Dorothy Thompson.  The couple had one son, Michael and they bought a summer home in Vermont to escape the oppressive heat of Washington in August.  The marriage was a notoriously stormy one fueled by both of their alcoholism.  The couple separated in 1936 and their divorce was final in 1942.
Lewis’s success continued in 1927 with Elmer Gantry exposed charlatan revivalism and was drawn from the career of evangelist Aimee Simple McPherson.  Although successful, the book aroused a firestorm of criticism and was banned and burned in several cities.   Dodsworth in 1929 cast a harsh light on the highest levels of American society and documented the personal liberation of a decent man dragged on a European grand tour by his shallow wife. 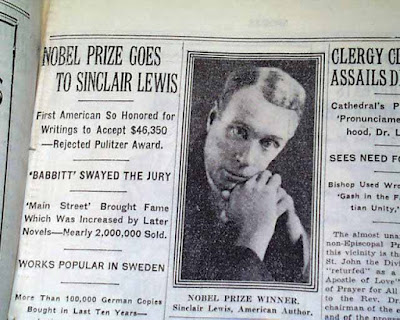 In 1930 he was awarded the Noble Prize for Literature, the first American so honored.  His lasting fame seemed assured.  In his acceptance speech in Oslo Lewis praised the work of Ernest Hemmingway and Willa Cather but castigated most American writers for being afraid to paint their country realistically and in lights that were less than flattering and was even harsher on critics and the academics who he described as liking “their literature clear and cold and pure and very dead.”


The speech turned that literary and academic establish almost universally against him.  The days of glowing reviews were over.  Very suddenly Lewis was out of fashion and a literary pariah.  His reputation has never recovered and his books seldom make required reading lists for American Lit undergraduates.  Generations have grown up only dimly aware of who he was.
Of course this was not all immediately apparent to him.  For one thing, his books were successfully being made into popular movies.  In 1931 Samuel Goldwin made a film version of Arrowsmith directed by John Ford and starring Ronald Coleman and Helen Hays which was nominated for four Academy Awards.  It took much longer—long after Lewis’s death—for the more controversial Elmer Gantry to make it to the big screen.  In 1960 it was finally made starring Burt Lancaster, Jean Simmons, Arthur Kennedy, and Shirley Jones.  Lancaster and Jones took home Oscars for their work and the film was also nominated for Best Picture.
Lewis continued to regularly churn out novels which met with poor critical receptions and sagging sales.  He completed 11 more novels and lived to see 10 of them published.  His ongoing battle with the bottle eventually began to have an effect on the quality of his work.  In 1937 after a particularly epic binge he checked himself into the Austen Riggs Center, a psychiatric hospital in Stockbridge.  His doctors told him bluntly that he would die if he did not stop drinking.  Lewis checked himself out of the hospital after ten days and resumed his old habits.
It Can’t Happen Here, a dystopian tale of the rise of fascism in America “wrapped in the American Flag and holding the Cross” is considered his last great work.  It remains prescient and perhaps of greater relevance than ever to American readers—if they were aware of it and could find it.  It deserves a place right alongside 1984 and Brave New World.
In the early 1940’s mutual anti-fascism and admiration for each other’s work led to Lewis teaming with Rabbi and author Lewis Browne for a series of successful lecture tours.  In 1944 Lewis was devastated by the news that his oldest son Wells was killed in action in an attempt to rescue and relieve the Lost Battalion in the Forêt de Champ, France.

In 1945 he had a last popular success with Cass Timberlane about a mature ex-Congressman and Judge, who falls in love with a much younger woman from the wrong side of the tracks.  It was made into a weepy melodrama by MGM starring Spencer Tracy and Lana Turner.
Lewis had in him one more important, if flawed book.  Kingsblood Royal told about an accomplished Black doctor and what happened to him and his family when he tried to move into an upscale White neighborhood in a supposedly liberal Minnesota city.  Not widely read at the time, it is now considered an important early literary contribution to the Civil Rights Movement.
With his health deteriorating seriously and alcohol fueling and increasingly nasty temper, Lewis exiled himself to Europe for his final years, loosely chronicling, his experiences in the novel he was working on.  He died in Rome on January 10, 1951 of the acute effects of alcoholism.  His remains were taken home to Sauk Centre to be buried near his mother, father, and beloved step mother.
That last novel, So Wide World was published posthumously.
Despite being deeply unfashionable Lewis’s fine books remain readable and are a great lens through which to discover America, warts and all.