Tomorrow evening my wife Kathy and I will be on one of trips to the Marriott Lincolnshire to see one of their uniformly fine stagings of a musical.  We indulge ourselves in season passes and have never regretted the expense. I have been particularly looking forward to Ragtime, the lavish and sprawling historical opus and won legendary critical acclaim on Broadway in 1999 only to fail financially due to the enormous cost of the production and huge cast.  The play was based on E. L. Doctorow’s 1975 novel which also birthed the 1981 film directed my Milos Forman and best remembered as the last screen performance by James Cagney.
That Ragtime would appeal to the proprietor of this blog will come as no surprise to regular readers.  It corresponds to the intersection of several interests covered here—American social  history, popular culture and entertainment, technological innovation and invention, and literature, all thanks to Doctorow and his foundational novel. 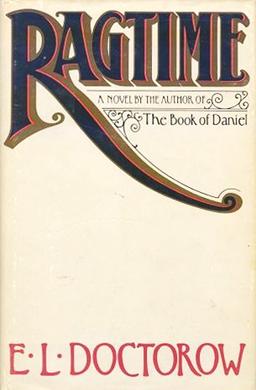 In Ragtime and other novels Doctorow played with mixing real historical persons with his fictional characters set in a background of real events and social conditions.  Ok.  That’s a common feature of historical fiction dating at least as far back as Alexander Dumas pere and his French adventure romances. Current American masters Larry McMurtry and Jerome Charyn innovatively mix fact, fiction, and fancy.
But Doctorow went further.  Rooted securely in time and place—early 20th Century New York and environs—the author shuffles social classes throwing his characters together in ways that illuminated the rapidly changing times.  He also set the scene by employing devices like newsreels and newspaper stories to document actual event.
He was not the first to do so.  John Dos Passos deserves credit for inventing the technique in his ground-breaking USA Trilogy b and John Steinbeck used the newsreel devise in The Grapes of Wrath.  More recently and feminist icon Marge Piercy in Sex Wars: A Novel of the Gilded Age New York was particularly adept at the collision of class, ethnicity, religion, ideology and, of course sex.
Ragtime featured three clusters of fictional characters.  First there was the purposefully unnamed comfortably upper middle-class family from the leafy and prosperous commuter suburb, New Rochelle, New York.  That’s the very same idyllic haven that George M. Cohan wrote about in his song 45 Minutes from Broadway. The family members were simply called Father, Mother, Mother’s Younger Brother, Grandfather, and the Little Boy.  They owed prosperity to a family business that promoted the same super patriotism and nationalism celebrated by Cohan—the manufacture of flags and fireworks.
Then there was Coalhouse Walker, Jr. a Harlem ragtime piano player; Sarah the servant girl he made pregnant; and the baby, Coalhouse Walker III, she tried abandon in the New Rochelle home’s garden.  Mother unexpectedly showed sympathy for the mother and babe, bringing them both into her home where Coalhouse sought them out seeking a reconciliation with Sarah.
Finally, there was the Latvian Jewish emigrant Tateh, a street artist with ambition; the young wife he drove away for desperately accepting money for sex from her employer, and his exceptionally lovely Little Girl.

Edgar Lawrence Doctorow was born on January 6, 1931 in the Bronx. His parents, David Richard and Rose (Levine) Doctorow were second generation Russian Jews and well assimilated by the standards of their community.  They named their son for Edgar Alan Poe. His father ran a small music store that struggled in the hard times of the Great Depression.
The boy attended public schools and was encouraged by his family to seek the security of the education offered by prestigious Bronx Science High School.  He did well in school but was more interested in literature and writing than by advanced math and science.  He contributed to the school literary magazine The Dynamo and took classes in journalism.
Doctorow went on to attend liberal Arts Kenyon College where he was mentored by poet and critic John Crowe Ransom, the founder and editor of the prestigious Kenyon Review. He majored in philosophy and took a special interest in theater acting in several student productions.
After graduation in 1952 Doctorow went on to graduate school at Columbia University back in New York City.  There he met and courted fellow student Helen Esther Setzer.  But in 1953 his courtship was interrupted and his studies ended when he was drafted into the Army.  Assigned to the Signal Corps, he rose to the rank of corporal and was posted to Germany.
While in the service Doctorow married his sweetheart and started a family that eventually included three children.  With a family to support he had to forgo continuing his education after his discharge and defer his dream of becoming a writer.  Instead he turned to a career as an editor.  It proved to be a long, but valuable apprenticeship.
An early gig was as a script reader for a motion picture company.  It was the mid-‘50’s and westerns were the rage.  He read so many that he started to write a parody of the conventions of the genre but as he worked it became a morality tale and a meditation on violence and revenge.  Welcome to Hard Times was published to critical acclaim, but modest sales in 1961.  A New York Times review compared the book to Joseph Conrad’s classic Heart of Darkness:
Perhaps the primary theme of the novel is that evil can only be resisted psychically: when the rational controls that order man's existence slacken, destruction comes. Conrad said it best in Heart of Darkness, but Mr. Doctorow has said it impressively.
In 1967 MGM brought the novel to the screen in an acclaimed film starring Henry Fonda, Janis Rule, Aldo Ray, Kennan Wynn, and Eliza Cook, Jr.  Income from the movie allowed Doctorow to leave behind his years in publishing and concentrate on his writing.
But in the mean time he had an illustrious—and informative—career as an editor. First, he spent seven years as a book editor at the quality literary paperback house New American Library (NAL) where he worked with such diverse authors as. Ian Fleming and Ayn Rand.  The in 1964 he moved on to Dial Press as editor-in-chief publishing work by James Baldwin, Norman Mailer, Ernest J. Gaines, and William Kennedy.
His long experience as an editor served him well.  His own book editor Jason Epstein later observed:
When you’d read Edgar's manuscripts, it was done. That’s just the kind of writer he was; he got everything right the first time. I can’t think of any editorial problem we had. Even remotely. Nothing.
Finally, in 1969 with his movie money in his pocket and an invitation to become a visiting writer at the University of California, Irvine, Doctorow moved to the Golden State and dedicating himself to his writing.  The first fruit of this period was The Book of Daniel, a roman a clef of the trial and execution of Julius and Ethel Rosenberg for nuclear espionage and treason in light of the turbulent campus radicalism of their children.  The book was proclaimed a contemporary masterpiece when it was published in 1971 and vaulted Doctorow to the first ranks of American novelists.
The book also was adapted as a film Daniel, directed by Sidney Lumet and released in 1983.  It starred Timothy Hutton, Hollywood’s go-to young idealist at the time, Mandy Patinkin, Lindsay Crouse, Amanda Plummer, Ellen Barkin, and Ed Asner.

When his stay at the UC Irvine over, Doctorow and his family returned to the comfortable home they had in New Rochelle, where he began work on the novel partially inspired by his adopted hometown.  Like The Book of Daniel the new work was deeply influenced by the social turmoil of the times.  But instead of directly embodying the ‘70’s they were reflected in the events and characters of the novel.  Readers were not beat over the head with parallels, but they clear.  Evelyn Nesbit’s story echoed the newer sexual revolution.  Mother’s awakening evoked the emerging feminism, Emma Goldman reflected the New Left, Coalhouse Walker and his angry gang stood for the militancy of the Black Power Movement and Black Panthers, and Mama’s Little Brother was a doppelganger for the kind of guilt ridden wealthy youth that became Weatherman bombers.
Ragtime became Doctorow’s most honored and celebrated novel, but he continued to produce remarkable fiction while also pursuing an academic career that included turns at Sarah Lawrence College, the Yale School of Drama, the University of Utah, Princeton University, and New York University.  Among his 12 novels are:
World’s Fair, 1985 set against the 1939 New York World’s Fair and world teetering of the edge of World War II.  Winner of the 1986 National Book Award.
Billy Bathgate, 1989 about an Irish Bronx kid’s rise in the Dutch Schultz mob.  Winner of the National Book Critics Circle award for fiction, PEN/Faulkner Award for Fiction, the William Dean Howells Medal, and was the runner up for the Pulitzer Prize and the National Book Award.  Adapted by British playwright Tom Stoppard for a 1991 film starring Loren Dean as the title character, Dustin Hoffman as gangster Dutch Schultz. The film co-stared Nicole Kidman, Steven Hill, Steve Buscemi, and Bruce Willis.
The March, 2005 based on Sherman’s March to the Seat and the closing days of the Civil War.  A Gone With the Wind antidote.  It was a recipient of the PEN/Faulkner Award, the National Book Critics Circle Award, and the Michael Shaara Award for Excellence in Civil War Fiction.  It was adapted for the stage in 2012 by Chicago’s famed Steppenwolf Theater Company.
Doctorow continued to be showered with honors among them the National Humanities Medal from the National Endowment for the Humanities, F. Scott Fitzgerald Award for Achievement in American Literature, Medal for Distinguished Contribution to American Letters from the National Book Foundation, American Academy of Arts and Letters Gold Medal for Fiction, and the Library of Congress Prize for American Fiction.
Doctorow’s long and productive life came to an end when he died of lung cancer in New York City July 21, 2015 at the age 84.  His wife, children, and countless devoted readers survived him.

Posted by Patrick Murfin at 1:50 PM