Presidents Day Among the Ashes 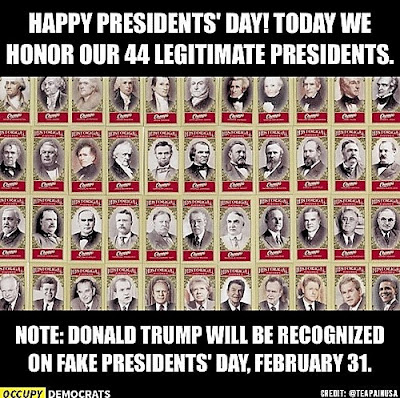 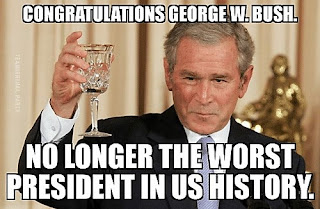 But the legacy of George W. Bush was far more damaging and longer lasting.  He sponsored and presided over unnecessary war, prosecuted that war with stunning incompetence, nearly destroyed the ground forces of the U.S. military, proclaimed a doctrine of preemptive war that left the nation nearly friendless in the world, embraced a policy of torture, systematically attacked the civil liberties of American citizens, subverted the Constitution by asserting  a new doctrine of the unitary executive, turned a budget surplus into a staggering Federal Debt, pursued a policy of showering the rich with tax breaks and relief from regulation that has compounded the class divide in the nation to 19th Century levels, allowed an American city to be virtually destroyed and abandoned it citizens, attacked the “bright line” separating Church and State, ignored science whenever it drew conclusions that threatened his ideological preconceptions, and ignored Global Warming as a tipping point crisis nears.  And he exited shoveling money at the bankers who caused the greatest economic disaster since the Great Depression—and managed to make people think that that was his successor’s idea. That’s a pretty impressive list.  It surely means that he must at least have a spot alongside the “Northern men of Southern Principles—Pierce and Buchanan—whose malfeasance set the stage for the Civil War.
Despite all of this, and it is a lot, the Shrub never seemed intrinsically evil.  Dim, yes.  Often clueless and way out of his depth.  He generally was trying to do the right thing as he understood it through his religious and political lenses.  He was capable of human empathy and compassion.  He was reasonably honest and did not use the office for personal aggrandizement or his private ATM.  He did not need to be worshiped and adored 24/7.  He expected to be criticized as a public figure, although the criticism must frequently have chaffed and did not launch vendettas against a critical press.  He did not obsess over slights and seek to personally humiliate or destroy his perceived enemies.  And he even had enough self-awareness not to always take himself too seriously and could even joke about his limitations and foibles.
In other words, Bush was the opposite of the narcissistic sociopath sitting in the Oval Office in front of his golden drapes waiting for his ring and ass to be kissed.  On a policy level this has played out with orders and actions meant to enrich himself and his class; harshly punish the poor, the alien, the other of every stripe; and indiscriminately insult the world.  Bad policy in Trump’s case is a direct result of bad character.  That makes Donald J. Trump hands down the worst and most dangerous President ever.
And what of the most recent former occupant?  It is, of course, too early for the ultimate judgment of history.  Barack Obama certainly came into office at a time of crisis—a boost to any chances to make one’s mark.  Brilliant men and able men have served and been forgotten simply because of the relative tranquility of their terms.  Faced with almost unprecedented economic disaster and two unpopular wars almost impossible to easily and safely withdraw from, Obama soldiered on with dignity and surprising success given the implacable opposition of an ideologically driven opposition in control of Congress.  He even managed to secure the passage of the first major health care reforms since Medicare, however half-hearted and flawed they may be.  And after stunning the world by winning re-election by solid popular and Electoral College majorities he staked out a bold progressive agenda for his second term.  Finally giving up on hopes of compromise with the Republican Congress, he became more daring in shaping the national agenda by executive orders where possible.
But there is a major fly in the ointment—the fatal flaw that overwhelms real achievement and merit.  Lyndon B. Johnson advanced civil rights and social reforms continuing a New Deal legacy but was bogged down in a senseless and unpopular war.  Richard Nixon had foreign policy triumphs like opening relations with China and presided over the establishment of the Environmental Protection Agency and the Occupational Safety and Health Administration but was undone by his own paranoid criminality.  Woodrow Wilson’s international idealism and reluctant support of women’s suffrage was matched by unprecedented domestic repression of labor and socialists and by the introduction of Jim Crow segregation into the Federal Government.
Desperate for a way to extricate ground troops from Iraq and Iran and to counter the lingering threats of an already largely smashed and dismantled terrorist enemy, Obama embraced the star chamber secrecy and brutality of a secret war established by the Bush administration  and which he had once railed against.  And he came to rely on war-at-a-safe distance drone technology and a policy of targeted assassinations.  Not only have the targets included American citizens, more importantly they have also been blunt instruments with plenty of civilian deaths in collateral damage and by simple mistake.  Every Pakistani village hit earns generations of implacable new enemies sworn to revenge.  Far from restoring, as the world hoped after his first election, American prestige and respect, these policies have further isolated this country and made us the most despised nation in the world.  Further policies of domestic surveillance and coordination of attacks on the Occupy Movement and other social protests threatened freedom of speech and protest in this country.
On the other hand, he may come off looking pretty good by comparison to the petulant would-be dictator who took his job.
At any rate, happy Presidents Day to one and all.  Go and buy a mattress.  Millard Fillmore will thank you.
Posted by Patrick Murfin at 12:24 PM