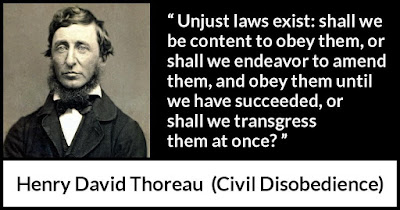 On May 14, 1849 an essay called Resistance to Civil Government was published in an anthology called Æsthetic Papers.  It would be a gross overstatement to claim that it immediately shook the world, or even that it attracted much attention at all beyond a narrow audience of New England intellectuals known collectively as the Transcendentalists.  The author, a dreamy 32 year old sometime handy man for his friend Ralph Waldo Emerson and the operator of a small pencil factory, was obscure.  The works that would bring Henry David Thoreau a measure of fame and notoriety as a hermit philosopher and naturalist lay in the future.  But despite such an unpromising  beginning the little essay, which would later variously published under the titles  Civil Disobedience, On the Duty of Civil Disobedience, and On Civil Disobedience would influence generations yet unborn and helped inspire movements which changed history.
Thoreau was an intellectually curious, somewhat socially inept, son of a local pencil maker of French descent and a mother of established New England stock.  He was born in Concord, Massachusetts on July 12, 1817.  He was reared in the historic Concord Unitarian church served by Rev. Ezra Ripley until 1841.  When the beloved and liberal Ripley died that year and the pulpit was assumed by a new minister who he considered insufficiently in touch with the divine and over concerned with doctrine, Thoreau resigned his membership and never returned, except for funerals and rites of family and friends.  He remained, however within the broader intellectual life that encompassed many Unitarian ministers and lay people and which was the hatching ground for the Transcendentalist movement.
He was educated at Harvard, but did not settle into one of the expected respectable careers of law, medicine, ministry or business.  Instead he became a school teacher and tutor—the occupation of a gentleman without other prospects.  After a brief stint as a public school teacher in Concord, which he resigned because he would not administer required corporal punishment, he and his beloved older brother John began their own Concord Academy in 1838.  The school shocked folks by taking students out of the class room for frequent walks through the meadows and woods to explore nature and visits to local shops and businesses like the blacksmith where middle class students were shown how things were actually made.  The school ended when John died in his brother’s arms of tetanus in 1842.

Tolstoy in turn was the gateway through which Mohandas Gandhi was introduced to Thoreau.  He discovered the American while organizing exploited and oppressed Indian workers in South Africa and explicitly acknowledged him for inspiring his first campaigns of passive resistance in his book For Passive Resisters in 1907.  Later as a nationalist out to win independence for his people, Gandhi was not much interested in either Tolstoy’s outright anarchism or Thoreau’s extreme skepticism of government.  It was always his aim to establish a parliamentary democracy on the English model he had long admired.  His interpretation of Thoreau was, however, overlaid with Tolstoy’s pacifism with more than a dollop of Ballou.
In incorporating Thoreau’s idea of civil disobedience into his philosophy of Satyagraha Gandhi effectively expanded the idea from individual action to a conscious and disciplined mass movement which changed it from being theoretically revolutionary, to being a highly practical actual revolutionary strategy.  Not without great cost and sacrifice it ultimately drove the British out of India and gave birth to a nation.
Martin Luther King, Jr. famously encountered Thoreau as a seminarian in Boston.  He later described the experience in his autobiography:
During my student days I read Henry David Thoreau’s essay On Civil Disobedience for the first time. Here, in this courageous New Englander’s refusal to pay his taxes and his choice of jail rather than support a war that would spread slavery's territory into Mexico, I made my first contact with the theory of nonviolent resistance. Fascinated by the idea of refusing to cooperate with an evil system, I was so deeply moved that I reread the work several times.
I became convinced that noncooperation with evil is as much a moral obligation as is cooperation with good. No other person has been more eloquent and passionate in getting this idea across than Henry David Thoreau. As a result of his writings and personal witness, we are the heirs of a legacy of creative protest. The teachings of Thoreau came alive in our civil rights movement; indeed, they are more alive than ever before. Whether expressed in a sit-in at lunch counters, a freedom ride into Mississippi, a peaceful protest in Albany, Georgia, a bus boycott in Montgomery, Alabama, these are outgrowths of Thoreau’s insistence that evil must be resisted and that no moral man can patiently adjust to injustice.
Actually they are a fusion of Thoreau and Gandhi.  But echoes of Thoreau’s call to personal responsibility echo particularly in King’s Letter from the Birmingham Jail which like the New Englander’s Lyceum lecture boldly challenged “good people” to lay aside both fear and the complacent view that the situation will work itself out in the long run and make a personal commitment to moral action.

King emphasized Gandhian non-violence in his campaigns both out of sincere religious conviction and out of the practical conviction that armed violence or rebellion would so awaken the deep seated fears of White Americans rooted in the slave rebellions that they would crush such a rebellion with overwhelming force and wreck terrible collective punishment on his people.  Instead he hoped to use non-violent defiance of Jim Crow laws to provoke violence, over reaction, and mass arrests to gain the sympathy and support of the White Americans, particularly in the North, who would pressure Congress for basic change.  Despite his rhetoric of hoping to win over the hearts of his immediate oppressor, King held little hope in magically transforming hardened Southern attitudes.  As a strategy mass civil disobedience worked extremely well and led to the passage of a series of landmark Civil Rights bills.
Perhaps the most direct heirs of Thoreau’s individual conscious disobedience was the radical Catholic anti-nuclear, anti-Vietnam War, and anti-draft movements epitomized by the likes of the Berrigan Brothers and their raids on Draft Boards and nuclear missile sites.  Along with draft card burning, wide spread refusal of induction, and a movement to refuse to pay war taxes those actions represented just the kind of personal action and self-sacrifice Thoreau was talking about.
Ironically today perhaps those who most encompass the whole of Thoreau’s message are elements of the far right who share his almost complete distrust of government and especially resonate with his refusal to pay taxes.  A lot of their quasi-libertarian rhetoric has a familiar ring.  Few of those employing it, however, recognize the source.  Of course some of the movement’s “intellectuals” know about Thoreau and may consciously have internalized his methods, the rank and file has been taught to distrust him because his causes were abolitionism and anti-militarism and expansionism.  Moreover he was a nature worshiping heathen who has inspired the despised environmental movement.  And the religious right has long viewed the whole Transcendentalist movement as the beginning of the downfall of their supposed Christian American utopia and as a nest of Eastern elitist atheism.  So Thoreau will get no chops from them.

You can also see the roots of civil disobedience unhitched from the absolute pacifism of Gandhi and King in many of the world mass movements of the last decades including all of the color coded revolutions in Eastern Europe, the Arab Spring,  Western European anti-austerity movements, and the Occupy Movement and Black Lives movements in this country.  Today it is being employed in Gaza and the marches on the Israeli fence which has turned the overpopulated enclave into the world’s largest prison/concentration camp. At enormous cost—earlier today scores were killed and 1,500 wounded by live fire as the United States was opening it new embassy in Jerusalem—has not only aroused world sympathy for the Palestinian cause, it has effectively isolated both Israel and the US on the world stage.
They encompass mass civil disobedience, but not necessarily passive resistance.  They are non-violent by preference but not ready to always peacefully accept oppressive attacks.  They share Thoreau’s general skepticism of government and the state but prefer resistance by mass solidarity to isolated individual action.
You have to hand it to him.  One way or another Henry David really started something.

Posted by Patrick Murfin at 3:38 PM