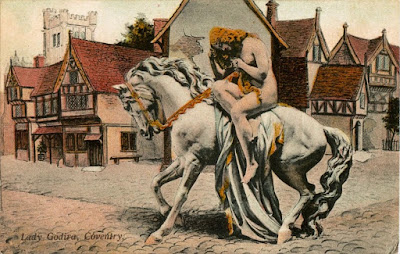 On May 31, 1678 the first Godiva Processional was held in the streets of Coventry commemorating the legendary ride of an Anglo-Saxon noblewoman through the streets of the town some time shortly before 1057.  The parade, featuring a scantily clad, but never actually nude local woman, was a continuing tradition into the 1960’s.  Local authorities hoped to down play Godiva as a symbol of Coventry.  But the lady proved to be far too popular, and the tradition has been re-established as part of an even larger Godiva Festival.
The reality behind the legend is murky.  But there was a real noble woman born before 1040 according to the Doomsday Book completed in 1086 shortly after the woman’s death and the charters to various churches and monasteries to which the Lady and her husband were benefactors.  Godiva is a Latinized version of the Old English name Godgifu or Godgyfu, a then popular moniker meaning Gift of God.
Leofric, Earl of Mercia, reputedly one of the wealthiest land owners in England, took Godiva, a very young widow, as his wife.  Together they became patrons of several monasteries and made generous gifts of gold jewelry and silver plate to several churches, including St. Paul’s Cathedral in London—the third building of that name which burned in 1088.  It was said that this generosity was at the behest of the very pious Lady.
Of course, such largess was expensive.  In order to sustain it, and the lavish lifestyle expected of a leading noble, Leofric raised taxes and the rents on his vast holdings, which included the still new city of Coventry.  Evidently taxes became so extreme that they reduced the residents of the city to want and hunger.
According to the earliest version of the story given in Flores Historiarum by Roger of Wendover about 1230, almost two centuries after the fact, after receiving appeals from the people, Godiva repeatedly begged her husband for relief.  He steadfastly refused.  Finally in exasperation he supposedly told Godiva that he would grant her wish if she would ride the city naked.  Given his wife’s famous piety, he must have considered this a good bet.

But plucky Godiva held him at his word.  In the original tale she rode through the streets still thronging with citizens accompanied by two knights.  The author quoted earlier writings, which, however, have never been found.
Like all good tales, this one gained something in the re-telling.  By the 17th Century the tale has Godiva ordering that all of the citizens of the town remain indoors as she made her ride alone, her long hair partially covering her nakedness.  Still later the story of Tom was added to the tale.  Tom, reportedly a tailor by trade bored a hole in his shutters to espy the Lady as she passed.  But for his shamelessness, he was supposedly struck blind and Godiva’s modesty preserved.  In lore he became the original peeping Tom.

In all versions of the story the repentant Leofric rescinds the hated taxes and Godiva is celebrated as the heroine of the town.
Whether or not any of this actually happened is anybody’s guess.  Kill joy scholars will provide lots of arguments why the tale is spurious but have no more proof that it is a lie than there is proof that Godiva actually rode.
We do know that Leofric died in 1057 and Godiva inherited his estates.  She survived the Norman Conquest of 1066 and more remarkably was one of the few Anglo-Saxon nobles—and even fewer women—who retained her lands.  But she died sometime before the records in the Doomsday Book, at which time her lands were in other hands.  The rapacious Normans evidently found a way found a way to seize the estate.
The story of Lady Godiva has inspired numerous paintings, poems, songs, plays, a line of expensive chocolates, and a Technicolor film starring Maureen O’Hara who, alas, was never shown in all of her glory.