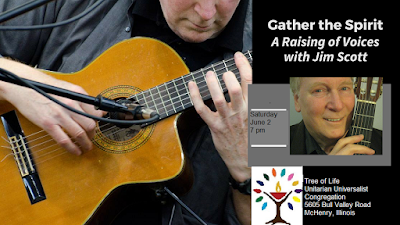 Jim Scott, folk singer, composer. and musical activist, returns to the Tree of Life Unitarian Universalist Congregation, 5603 Bull Valley Road in McHenry, on Saturday June 2 at 7 pm with a new program, Gather the Spirit—A Raising of Voices.
Scott, who last performed at Tree of Life in 2016 with a tribute to his inspiration and mentor Pete Seeger, has made it his business for three decades to create and perform music that celebrates the earth. His songs and poetry have inspired and educated audiences around the world. He has developed presentations for every age group and crafted songs that sensitize his listeners to the beauty of the earth, teaching principles of ecology in memorable verses.

“Jim brings a warmth and authenticity that turns any size audience into an intimate gathering,” according to Tree of Life Social Justice Chair Janet Burns.  “His lyrical melodies, well-crafted words, guitar mastery, and humorous surprises invite all to get involved with the songs and ideals he raises.  It’s a raising of voices and of spirits as Jim leads songs of earth, peace, community, love and just fun as everyone joins in. A lifelong UU he has visited over 700 UU churches in 3 decades of travels.”
As a member of the Paul Winter Consort and as a solo performer, Scott has recorded 18 albums including the highly acclaimed Missa Gaia/Earth Mass, A Concert for the Earth (Live at the U N), Big and Little Stuff: Songs for Kids, and Body and Soul, a soundtrack for the documentary series on PBS Television.  He is also an active Unitarian Universalist who as co-chair of the Seventh Principle Project helped to create the Green Sanctuary program and accompanying handbook for building an ecological/spiritual awareness in church congregations.

Scott has performed or toured with John Denver, Tracy Chapman, Joan Baez, 10,000 Maniacs, Joni Mitchell, Jackson Browne, Holy Near, Dan Fogelberg, Odetta, and Tom Chapin.
His eco-anthems and modern hymns like Gather in Spirit have been included in the UUA. hymnal Singing the Living Tradition and are a regular part of many Sunday services.
Tickets are $20 but all are welcome for a donation they can afford and are available at the door.
Scott’s CDs will be available for sale at the concert.
For more information call the Tree of Life at 815 322-2464, e-mail office@treeoflifeuu.org or visit https://www.facebook.com/events/1764980900227343/?active_tab=about .