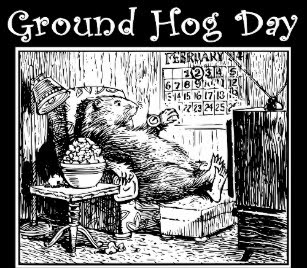 Note—This year the annual Groundhog Day observances in Woodstock, Illinois come on the heels of a historic sub-zero cold snap.   With over a foot of snow now covering the Square despite warmer temps it could be a challenging occasion.  Loyal locals and tourists alike will turn out anyway and hope overcast skies will prevent the star rodent from seeing his shadow.  Just how all this come to be is plumbed in this re-cycled blog post.
Well, it’s Groundhog Day again.  In the Chicago area that means a familiar ritual.  No, not that one.  A certain moon faced and bald TV weatherman will go apoplexic over folks making a huge deal over the faux meteorological prognosticative powers of a lethargic rodent.  Tom Skilling rose to prominence decades ago bantering about the weather on Bob Collins’s hugely popular WGN Radio morning show.
In 1990 he cemented glory and fame when he predicted the likelihood of severe tornados from a supercell thunderstorm moving out of Wisconsin and into Illinois.  He stayed on the air with Collins accurately charting and predicting the path of the storm while the official National Weather Service office in Chicago sat on its thumbs and issued no warnings.  His early advice to the people of Plainfield to take cover was the only warning they got saving at least some lives when a Category 5 twister destroyed much of the town and killed 27 on August 28.
After that Skilling became something of a folk hero.  He added WGN TV news broadcasts to his daily schedule and was so popular that the station began building their early-at-9pm news  around his forecasts, which were and are ridiculously detailed with more meteorological data and scientific interpretation than his competitors on the network affiliates.
Skilling really, really hates Groundhog Day.  Old Chicagoans now tune in just to see if his head really does explode this year, which annually seems more likely as he has grown fatter year by year.  Sadly for him, it is a losing battle.  Instead of withering under scientific scorn and the weight of irrefutable evidence, Groundhog Day continues to  and spreads every year.  From an obscure folk custom observed by a handful of German immigrants and their decedents in isolate pockets of Pennsylvania in the l18th and 19th Centuries it has spread nationwide.
Wikipedia identified no fewer than 38 woodchucks dragged from their winter hibernation and exposed to the sky across the U.S. and Canada.  Come hell or high water virtually every news broadcast in North America today, including Skillings’s own WGN, will feature stories about one or more of the creatures and whether he—almost always identified as a male but most frequently a she—will see his shadow supposedly signifying six more weeks of winter weather.
These local observations got big boost with the release of the movie Groundhog Day starring Bill Murray and Andie MacDowell in 1992.  The film has become a beloved classic with a cult following often compared to Frank Capra’s It’s A Wonderful Life.  It was filmed in my neck of the woods, as another TV weatherman used to say, in Woodstock, Illinois.

Just after 7 am Woodstock Willie will make his grumpy appearance from the Gazebo as he has every year since the film came out.  The city has stretched the celebration into a day-long festival in hopes of luring pilgrims and tourists.  It works.  The Woodstock ritual is now the second-most famous celebration in the country behind the original at Punxsutawney, Pennsylvania, which the McHenry County town portrayed in the film.
Part of the spreading appeal of the celebrations is because they are a welcome, if silly, relief from the dreary tedium of the depths of the winter, long after the razzmatazz of the Holidays have past and when everyone in cold climes are sick to death of snow, ice, howling winds, and leaden skies.  But a philosopher might speculate that the surging popularity of Groundhog Days mirrors the growing anti-intellectualism of modern America and the spreading animus to science now officially embraced by a major political party and reflected in rejection of evolution, denial of climate change, anti-vaccine hokum, and a general rejection of rationality.  Or maybe that would be reading too much into a harmless custom.
So how did all of this come to pass?  Some claim religious roots stretching back to Neolithic Europe.  The growing neo-pagan movement is explicit in laying claim to it, but Catholics have their own customs which may, or may not have been cribbed from older traditions.
Groundhog Day has been traced to pre-Christian Northern European folk traditions stretching back in the mists of time.  It is notoriously difficult to pin down precise origins of such oral traditions or to know the complete religious significance of them.  Tales about a beast—usually envisioned as a bear or a badger that had powers to predict or control the weather seem to have originated in Norse and/or Germanic tribal societies and spread by diffusion or osmosis to other European peoples including the Slavs to the east and the Celts to the south and west.  The celebration of the animal was tied to the half-way point between Winter Solstice—Yule—and the Spring Equinox.
Although most of the animal and weather lore that leads directly to Groundhog Day are of Northern European origins, modern Wiccans and neo-pagans have identified it with the Celtic festival of Imbolc one of the four seasonal quarter festivals along with Beltane (Spring/Easter), Lughnasadh (Mid-Summer) and Samhain (Fall/Halloween) that fall between the solstices and equinoxes.  Traditionally it was a festival marking the first glimmers of spring while still in the grip of the cold and dark of winter.  As such it was distantly related to the transition predicted by the Norse totem animal, but had no known direct corresponding myth.
Instead it celebrated the goddess Brigid patroness of poetry, healing, smith crafts, midwifery, and all arts of hand.  In some stories her feast on February 1 celebrated her recovery after giving birth to the God—the Green Man—who will come into his own and rule from Lughnasadh to winter.
In Ireland with the coming of Christianity the Goddess and her festival became identified with St. Brigid of Kildare, along with Patrick and Brendon one of the three Patron Saints of the country.  Now thought to be apocryphal, St. Brigid in lore was first recorded in the 7th Century and expanded upon by later monks and scribes.  She was described as the daughter of a Pict slave woman converted by Patrick himself. Born in 451 in Faughart, County Louth  she became a holy woman, nun, and abbess who founded a monastery on the site of an ancient temple to the Goddess Brigid in Kildare.  She assumed many of the pagan goddess’s attributes and performed many miracles.  Stories about the Goddess and the Nun are so intertwined that it is impossible to figure out if the holy woman was real or an invention of the Church intended to comfort converts with familiar and beloved tradition.

Today the best known tradition associated with the Feast of St. Brigid is the making of the off-center straw crosses from last season’s straw that are hung as talismans in Irish homes through Lent until Easter.
Almost all of the original traditions associated with the Goddess Brigid and Imbolc had been eradicated or simply faded away 18th Century even in Gaelic speaking regions.  In the 20th Century Wiccans and other neo-pagans have attempted to revive the old Celtic traditions and in the process invented rituals and lore to fill in the lost gaps.  Many believe the Quarter Festivals and old Gods and Goddesses are accessible spiritual metaphors for worship of the natural world and the timeless rhythm of the seasons.
That included borrowing from St. Brigid, as well.  Her straw crosses are now described as not Christian at all but as ancient symbols representing the Four Quarter Festivals and the Four Cardinal Directions.  There is no way to prove or disprove that assertion.
The Rev. Catharine Clarenbach, a Unitarian Universalist minister explained how modern practitioners view Imbolc in an entry on Nature’s Path, a U.U. pagan experience and earth centered blog hosted by the religious site Patheos.  She called it “a light not heat holiday” in which the slowly lengthening days and first tenuous hints at Spring-to-come give hope to those trudging through the hard days. “When people are desperately ill, hope can fuel the long slog toward wholeness and healing, even if that healing is not a cure.”
That certainly ennobles the day beyond the giddy fantasy of groundhog magic.
But our trail to modern Groundhog Day does not end with the re-invention of Imbolc.  Indeed other than sharing a date, the two celebrations have little in common.

Over in England and Scotland a different Christian tradition evolved—Candlemas observed on February 1, the eve of St. Brigid’s Day and often confused as British equivalent.  But Candlemas has very early 4th Century Christmas roots as The Feast of the Presentation celebrated by early Church patriarchs including Methodius of Patara, Cyril of Jerusalem, Gregory the Theologian, Amphilochius of Iconium, Gregory of Nyssa, and John Chrysostom.  It celebrated the presentation of Jesus at the Temple in Jerusalem as an infant.
The celebration slowly spread from the Levant to the rest of the Church and Roman Empire.  When the date of Christmas was finally fixed on December 25, the Feast of the Presentation was added to the liturgical calendar forty days later on February 2.