Once Upon a Real Chicago Ice Storm—Murfin Memoir 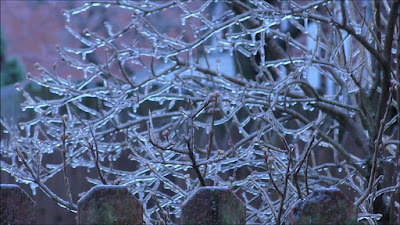 Chicago and the Northern Boonies  were under a rare—the first in ten years—ice storm alert last night.  It was something of a bust.  Although roads did get slick and inevitable traffic accidents occurred, the total accumulation of ice was below predictions.  Only a handful of isolated power outages were blamed on the conditions.  Here in McHenry County the predicted freezing rain was accompanied by sleet and a wintery mix that left sidewalks, drive ways, and parking lots coated by a textured surface that was walkable if you were careful.  But the trees do look lovely encased in ice.
It brings to mind a far more serious ice storm decades ago and some odd memories.
It was on an Easter weekend sometime in the early ‘70’s. Chicago was in the grips of a monumental ice storm.  A consultation of meteorological history and a table fixing the dates of that gypsy holiday would firmly fix the date.  1970 or ’71 would be my guess.

We slip-slided—literally since ice thickly coated the streets and sidewalks—over to my friend Penny Pixler’s place, a  second floor apartment somewhere south of Armitage Avenue between Old Town and Halstead.  The “we” were young Wobblies. The mission was to read aloud from James Joyce’s Finnegan’s Wake  while sipping Jameson’s Irish Whiskey and ingesting some very powerful purple acid.  We had a little grass as well, just to keep the edge off.
It was probably Kathleen Taylor’s idea.  She was our leading enthusiast for Irish culture.  She knew the great old songs, played a small, dark Martin guitar, could beat a bodhrán, and blow a penny whistle in a pinch.  Or it may have been Penny.  She was quite literary.  It may even have been my doing, hatched over too many beers at O’Rourke’s Pub on North Avenue where portraits of Joyce and other Irish scribes watched silently from the walls as newspaper types, writers, and a wannabes like me regaled each other with lies.

I am a little unclear as to all of the participants.  Young  Dean Nolan, recently arrived from Portland was there.  I can’t imagine that Leslie Fish and Mary Frohman—eccentric even in our circles—songwriter/singer/cat lady/lesbian/anarchists, missed the occasion.  I am sure there were others.
We settled into the living room mostly sprawled on the floor.  Kathy got us going with a rousing version of the old 19th Century Irish folk song—Joyce’s inspiration.  We passed the Jameson’s and a joint.  We started to read as the acid began its work.  I can’t remember if we tried to start at the beginning or someplace else.

After a while, I remember watching the window in Penny’s living room as if it were a movie screen.  The window stretched nearly the width of the room, which itself took up the whole front of the second story of the frame two-flat. It was no more than two or three feet high.  Lying on the floor, I could see nothing but the three bare poplars, heavy with ice, sway in the wind against a slate sky in time to the rhythms of Joycean nonsense.
Hours later we slid away in the dark, street lights shining reflections of the perfectly smooth ice.  I kept falling.  I was young then and could still bounce up.  Perhaps I was immortal.
Posted by Patrick Murfin at 10:37 AM