Postal Sabotage is a Coup Attempt in Plain Sight 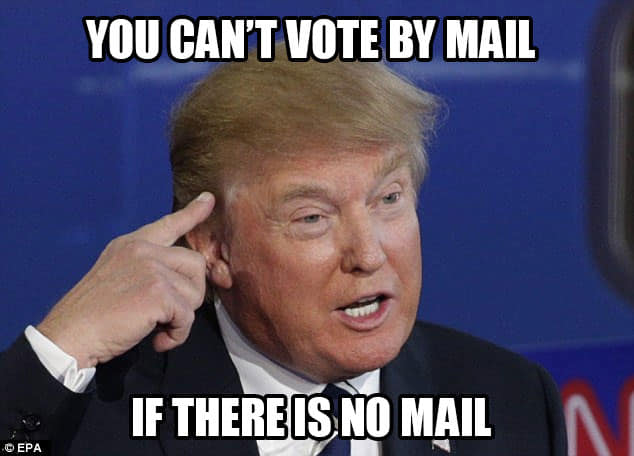 Note—The first of two parts about the Postal Service.  Today—an existential threat to the institution and to democracy itself.

Most of us in the depths of our wildest despair and paranoia expected that it would come to this—that the President of the United States is openly and brazenly destroying the only agency of the Federal Government so essential that it was specifically mentioned in the Constitution not any cabinet office but a national postal service.  And he is explicitly doing so to undermine free elections and perpetuate himself in office no matter the overwhelming disgust of the American people.

If you have not been paying attention the Cheeto-in-Charge has appointed a wealthy crony and toady, Louis DeJoy as Post Master General.  DeJoy, who unashamedly owns stock in United States Postal Service (USPS) competitors hit the ground running dismissing or demoting most senior Postal Service officials and replacing them with reliable rubber stamps.  He ordered an end to all overtime by postal employees including distribution workers, mail sorters, and letter carriers and ordered them to leave behind any mail that they could not expect to deliver on theirs shifts.  The predicable result has been a delay of service with some urban neighborhoods reporting that they have not had home delivery for three weeks or more.

As if that was not enough, postal collection boxes were ordered removed all over the US but somehow especially in Blue states.  Social media has been flooded with images of the boxes being hauled away or crowding Post Office yards and warehouses.  Where the boxes could not be removed quickly enough some were welded or bolted shut an others wrapped in plastic.  While not every box has been removed postal patrons will have more difficulty finding convenient receptacles for mail in ballots and any other business.

If that does not sufficiently slow service, hundreds of high volume automatic mail sorters have been removed for postal distribution centers, another huge bottleneck.

The resulting delays in Postal service will not only sabotage the November election it will delay the delivery of vital medications, interfere with Social Security and other benefit payments, and delay both bills and bill payments.  Payments received late can be subject to hefty late fees and charges and damage credit ratings.

Meanwhile Trump and his cronies are trying to starve the Postal Service to oblivion. Even before Coronavirus pandemic the USPS faced a financial crisis.  The Post Office Department was reformed right out of existence under President Richard Nixon in 1971 and reborn as the United States Postal Service, a quasi-public corporation run by a Board of Governors but answerable to Congress.  The Postmaster General vanished from the Cabinet.  The new corporation was charged with running like a business and expected to turn a profit.  That was made difficult by a number of restrictions placed on it by Congress and then made impossible when the USPS was mandated to fully fund pensions decades into the future, huge payments that make it impossible to report a profit and has allowed rightwing ideologues in Congress to declare it a failure and push for massive service cuts, continuing steep annual postage rate hikes, and eventually its complete replacement by competing private companies like Federal Express and UPS.
Attempts to increase Postal Service support through the regular budget process were regularly stonewalled in the Republican controlled Senate.  The Democratic majority in the House of Representatives earmarked emergency aid in their version of the original Covid-19 emergency stimulus bill.  Under pressure from the White House and its point man on the stimulus package, Treasury Department Secretary Steven Mnuchin, the Senate rejected the Democratic plan for a $13 billion direct grant that the Postal Service would not have to repay.  Mnuchin threatened to block the whole $2 billion dollar relief bill if aid to the USPS was included.  “You can have a loan, or you can have nothing at all.” Eventually an inadequate $11 billion loan was approved with plenty of strings attached.  Despite the authorization the administration dallied in actually delivering the loan.
House Dems attached more funding in the second stimulus package which it sent to the Senate in mid-May.  Senate Majority Leader Mitch McConnell refused to take up the House bill and took until mid-summer to offer a Senate version sans postal aid.  Negotiations on a compromise broke down.
As the stalemate continued Trump last week baldly assert that he was holding up Postal Service aid because of Democratic proposals to provide $3.6 billion to states to run elections and $25 billion in aid to the postal service. “They need that money in order to have the post office work so it can take all of these millions and millions of ballots,” Trump said in an interview with Fox Business’s Maria Bartiromo. “If they don’t get those two items, that means you can’t have universal mail-in voting because they’re not equipped to have it.”
In obedience to his master McConnell recessed the Senate until well after Labor Day without passing anything.  That means no extension of $600 emergency unemployment benefits which have expired, no continued Federal suspension of evictions, no funds for states and cities to keep afloat, and no new aid for small business.  It is a disaster for millions of Americans and is expected to deeply damage the already perilous economy.
There we howls of outrage over Trump’s moves, but he has stood by them with only a little verbal waffling while not changing course.  Experts believe the actions are blatantly illegal but law suits to stop it have little chance to be heard and decisions appealed even on an emergency basis in time to prevent disruption of the election.  They would also have to survive rulings by the many Trump appointees to the appellate bench and Supreme Court.

Others suggest that the President, DeJoy and other officials could be charged with felony interference with the mail.  As delightful as that prospect may be, no one will be placed behind bars for a long time and Trump can always use his pardon powers preemptively.

A campaign is underway to urge the nine presidentially appointed members of the Postal Service Board of Governors to fire the Post Master general and block his efforts to sabotage the agency.  But there are six Republicans, all nominated by Trump, and only three Democrats on the Board.  They are unlikely to vote against DeJoy, who they dutifully elected on Trump’s nomination on June 15.

Speaker Nancy Pelosi announced Sunday that she was calling the House back into sessions immediately following this week’s Democratic National Convention to take emergency action to block Trump’s sabotage.

In a joint press conference with the Speaker Senate Minority Leader Chuck Schumer put the issue in stark terms—the sabotage of mail-in voting is proof that Trump knows that he “can’t win without cheating."

The most likely vehicle for action will be a version of a bill introduced by House Oversight Chair Carolyn Maloney earlier this week that would prohibit USPS from implementing a planned organizational overhaul that critics would handicap mail-in voting.  But unless a handful of Republicans in the Senate respond to growing bipartisan outrage, the measure will be dead in the water in the higher chamber.

In the face if the growing backlash, the administration has tried muddy the waters.  On Friday DeJoy told a Congressional panel that he would not remove post boxes, but there is no evidence the removal has actually been stopped and no guarantee that either already removed boxes would be put back in place or that regular and timely mail pickup from them would be scheduled.  Trump’s Chief of Staff de jour Mark Meadows told a Sunday morning news show that “I’ll give you a guarantee right now that the President of the United States is not going to interfere with anybody casting their vote in a legitimate way, whether it’s the post office or anything else.”  But of course his boss has repeatedly said that mail-in-voting, at least in Democratic states would be fraudulent and illegitimate.

Of course the attack on the USPS is just part of a much wider attack on the election.  Once again officials in Republican states will ramp up their voter suppression efforts including last minute voter purges, slashing in-person polling places especially in minority communities, blocking equitable distribution of voting machines, and outright voter intimidation.  In response to grass-roots efforts to turn out the vote despite postal delays Trump allies have even filed a Federal law suit against counting any mail in ballot without a postmark.  That would counter recommendations that voters hand deliver their ballots to local county clerks, other election agencies, or the secure lock boxes provided for in Illinois and other states.  The suit is frivolous and will likely be dismissed, but it adds uncertainty.

All of this fuels justifiable paranoia.  What if Trump’s demands for opening the economy and schools is actually an attempt to have a raging epidemic that makes voting in person as difficult as voting by mail?  Could he use it as an excuse to declare a national emergency and postpone the election?  Constitutional experts say no, but that might to stop him from trying.  What if withholding unemployment benefits and barring eviction protections is a plan to increase homelessness which could lead to challenges to voters for not having a current address?  Unthinkably draconian?  Yes, but somehow not impossible.  Could he call on those “very fine people” including his die-hard fans, motorcycle gangs, White nationalists, “patriot” militias, plain old gun nuts to rise up to prevent his ouster in an allegedly rigged election?  Would he really stop short of a civil war?  What might he ask Vladimir Putin and the Russians to do to meddle even more outrageously in our elections and what price may he have to pay to get that help?

What can we do? We all have to redouble our efforts against all odds to turn out a massive vote that Trump and his allies cannot overcome.  That means ignoring all of the many attempts that will be made to turn against each other against and there will be many.  Then if he retreats to his White House bunker and refuses to go quietly and peacefully we may need to flood the streets not just for one-time-marches but for the kind of day after day massive protests that have brought down other tyrants and are right now playing out in Belarus where the people are demanding the end of Alexander Lukashenko’s 25 years of dictatorial rule after his fraudulent re-election earlier this month.  Today workers will stage a general strike in support of the hundreds of thousands in Minsk who have defied violence and repression.
Tomorrow—Moving the Mail Was the Federal Government’s First Order of Business.

Posted by Patrick Murfin at 9:13 AM