Trump Has Social Security Under Siege on its 85th Anniversary

Note—Your scribe, the Old Man, in the interest of transparency admits that he is a recipient of Social Security and Medicare and damn glad of it! But on the 85th anniversary of Social Security’s enactment the Cheeto-in-Charge is undercutting its very foundations by suspending the FICA withholding tax that funds the two systems as a supposed Coronavirus stimulus measure.  The suspension is a shell game to buy votes this November because surprised tax payers will be shocked to learn that the differed payments are still due come April 15, 2021.  But the Con-Man-in-Chief also promises that he will make the cuts permanent if re-elected defunding the foundations of security for millions.
On August 14, 1935 President Franklin Delano Roosevelt signed the Social Security Act into law.  It was the crowning achievement of the New Deal.   It has rightly been acclaimed “the most successful American anti-poverty program in history.”  Once considered so popular that proposals to alter or abolish it were widely considered the third rail of American politics—too dangerous to seriously advance.  But that was before years of a carefully managed drum beat of hysteria that the system was somehow running out of money which has convinced many folks, despite all of the evidence to the contrary, that they will never live to collect what they have been paying in for their entire working lives.
That kind of talk was the camel’s nose under the tent that allowed retirement ages to creep upward and for talk of limiting or reducing future benefits become fashionable in some quarters.  Proposals to privatize all or part of the system in whole or in part seemed to be gain steam for a while.  These would allow younger workers to take all or part of their Social Security contributions and invest them in private IRA-like accounts.

The wind was kicked out of that fantasy in the stock market collapse of 2008, which understandably raised doubts for the safety of investment in the volatile Stock Market.
But some bad ideas just won’t stay dead.  Republican Vice Presidential Candidate in 2012 Paul Ryan refloated various alleged reforms, including the privatization scheme.  That was good politics in the short run as Tea Party activists were threatening to sit out the election because Mitt Romney was allegedly too moderate or perhaps even a hated RINO (Republican in Name Only.)  But it surely it contributed to the GOP’s rather decisive drubbing at the hands of Barack Obama and Social Security loving Democrats.  Romney has atoned for his apostasy by pressing Social Security “reforms” as a Senator that would cut benefits and raise retirement age yet again.  That got slipped into the Senate Republicans’ new Coronavrus stimulus proposal.
In the 2016 clown car posse of Republican presidential wannabes mostly kept their yaps shut about Social Security even if their plans did not change.  Libertarian darling Rand Paul, however, was actually for abolition of the system, but you have to dig deep into his position papers and old speeches to safely conservative audiences to discover it.  Hapless Louisiana Governor Bobby Jindal, dragging bottom in the polls tried to attract attention and support from deep pocket oligarchs by making noises about hitting the program.  Jeb Bush, the White Hope of party regulars and insiders as a supposed moderate  who could win a general election, showed himself to be a clone of his brother who pushed so-called reform and privatization by suggesting that lazy Americans need to work until they are 70 or beyond.  Donald Trump avoided the topic except to claim that he would “save” Social Security.
Of course the demographics of a lot of Baby Boomers retiring together over the next few years in a kind of slow motion avalanche and the reduction of collection of FICA taxes after the economic collapse due to heavy unemployment and actually falling wages for those still employed did put a strain on the system, which could theoretically go bankrupt in a few years unless “something is done.”
But that something does not have to be further raises in the retirement age, reduction of benefits, privatization, or changing the system from social insurance to a means tested welfare program—the later program sometimes surprisingly advanced on the right knowing that it would erode support for the system among higher income voters.

Bernie Sanders, the Independent Vermont Senator and proudly self-proclaimed socialist who surged from being a snubbed dark horse challenger to a serious rival to Hillary Clinton as a populist powerhouse, long supported and proposed simple Social Security reforms that would keep the program safe and solvent well into the next century.  He pointed out that simply raising the cap on wage income subject to FICA taxes and/or levying FICA taxes on non-wage income above a certain level would do the trick.
Now, three years into the Trump era and the all-fronts attack on all popular Democratic programs from Obama’s Affordable Care Act (ACA), to Environmental Protection Agency regulations, to voting rights and election security, Social Security cuts are once again on the table.  Senate Majority Leader Mitch McConnell blamed the burgeoning deficit on social insurance programs and so-called entitlement programs when he publicly pledged to pursue massive cuts in October of 2018.  Despite the fact that the ballooning deficit was clearly the direct result of Republican tax cuts for the wealthy which slashed Federal tax revenues and that the Social Security Trust Fund is entirely separate from the operational budget, 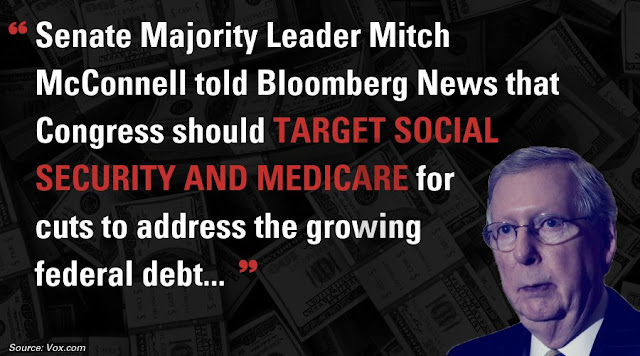 Meanwhile even more draconian plans to actually abolish the Social Security System have been proposed by some Republican in the House of Representatives.  Although these bills have zero chance in the Democratic controlled House, they make propaganda points with the libertarian far right and the deep-pocket billionaires that finance them.

Before Social Security was enacted those who lived beyond their income producing years were the poorest sector of society, particularly those who could not rely on the support and/or charity of family.  And the necessity of supporting an elderly relative drove many young families into poverty because of the extra expenses and the foregone income of those who had to become caretakers.
Today, those over 65 are the least likely of all age cohorts to live in poverty.
The battle for Federal retirement insurance was a long one.  The first such scheme was advocated as early as the 1820’s by trade unionists and socialists in Europe.  German Chancellor Otto Von Bismarck implemented the first old age insurance plan in 1889 in the hope of achieving social stability in the new German Empire and uniting the loyalties of citizens of the various principalities he had brought together.  The German system provided contributory retirement benefits and disability benefits as well.  Participation was mandatory and contributions were taken from the employee, the employer, and the government.  It would become essentially the model for F.D.R.’s initiative.
Social security plans had spread over Europe but were resisted as unwanted government interference in business in this country.  Social security, along with unemployment insurance, a government medical plan, the eight hour day, and limits to child labor were key planks of Eugene V. Debs’ Socialist Party platform of 1912.  It was widely supported by most of the labor movement, although some craft unions which had wrung private pension plans from employers were opposed.
Roosevelt’s Secretary of Labor Frances Perkins spearheaded the drive for Social Security for the administration.  Republicans in Congress bitterly opposed the program, decrying it as socialist, un-American, unconstitutional, and a business destroying tax burden.  Sound familiar?

But the program was still wildly popular with voters, who elected large numbers of Democrats committed to the program in both houses of Congress in 2018 and promise to win even more seats this November.
Some compromises, however, had to be made and the original system was far from perfect.  Nearly 50% of all workers were excluded from coverage including workers in agriculture, domestic service, government employees, and most teachers, nurses, hospital employees, librarians, and social workers. The act also did not cover those who worked intermittently including most seasonal workers.
These provisions fell especially heavy on women and minorities who were disproportionately engaged in these occupations.  90% of all domestic workers were women and 2/3 of all employed Black women worked in domestic service.  And Southern Black men were predominately engaged as agricultural workers.  For these reasons the NAACP actually opposed the legislation that reached Roosevelt’s desk calling it, “a sieve with holes just big enough for the majority of Negroes to fall through.” Most women qualified for old age insurance only through their husbands.  Women’s payments under the system were based on the presumption that mothers would not be in the work force.

The Social Security Act also established the Aid to Dependent Children, a welfare program designed to support children in unemployed families who had exhausted unemployment insurance.  Management of these programs was left to the States, at the insistence of Southern Democrats who did not want to disturb the racial status quo.  As a result Southern states routinely adopted rules making it difficult or nearly impossible for Black families to qualify.
This became one of the major reasons, along with increased employment opportunities as the country geared up for war later in the decade, for the Great Migration of rural Southern Blacks to Northern cities.
In 1937 the Social Security withholding tax went into effect and the system began building reserves to make the first payments to retirees, originally scheduled for 1942.  Some economists charged that the income taken out of circulation by the tax was responsible for the 1937 Roosevelt Recession.  Others have pointed to drastic reductions in Federal spending because of budget concerns and because key elements of the New Deal had been declared unconstitutional as being the real culprit in the downturn.  Some felt that building a huge reserve before beginning to make pay-outs was a drag on the economy.
So in 1939 Social Security was amended to begin making payout two years earlier than planned.  This caused the plan to become a de facto pay as you go system with current workers supporting the immediate benefits to retirees instead of relying of a large accumulated fund.  The amendments did establish a trust fund for any surplus funds managed by the Secretary of the Treasury. The money could be invested in both non-marketable and marketable securities.
But because this trust fund became a Treasury Department asset, Congress later began to borrow against it to fund current general spending.
Amendments to the act also tied women’s benefits more closely than ever to their husband’s income. The amendment added wives, elderly widows, and dependent survivors of covered male workers to those who could receive old age pensions. These individuals had previously been granted lump sum payments upon only death or coverage through the Aid to Dependent Children program.
While this rescued many widows from poverty, the amendments also devalued the value of benefits a woman could receive from her own labor.  If a married wage-earning woman’s own benefit was worth less than 50% of her husband’s benefit, she was treated as a wife, not a worker and the dependents of women who were covered by Social Security benefits were ineligible for her benefits.  Changes were also made to the Aid to Dependent Children program, including raising the age of eligible children to 18.

Despite being far from perfect, the first monthly payment was issued on January 31, 1940 to Ida May Fuller of Ludlow, Vermont.

Posted by Patrick Murfin at 5:41 AM