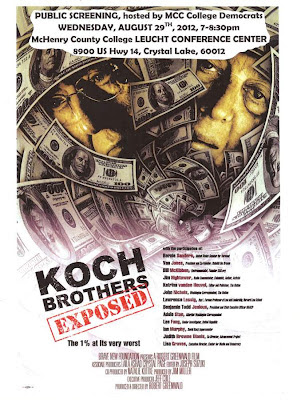 Katrina vanden Heuvel writing in The Nation said, “With an unflinching investigative look at the Koch brothers’ money and power, Brave New Films has once again created a film full of rollicking and rigorous facts that informs and challenges corporate media with the truth. The latest in a series of tough and sharp social justice films—check out Rethink Afghanistan, WAL-MART: The High Cost of Low Price and Sick for Profit—Koch Brothers Exposed should be a wake-up call for people across the political spectrum to take action to halt the selling off of our democracy.”

The billionaire Koch brothers have become well known left wing boogey men for their relentless funding of not only far right and Tea Party candidates and web of influential organizations that have impacted legislation in state after state that has fallen into complete Republican control.  It is no accident that anti-union legislation and attacks on public services and employees have been cloned over and over again.  And the same bad boys are also pushing the voter suppression efforts across the country in a bold attempt to steal the upcoming election.

But even hardcore political junkies don’t know the whole sordid story.  And most rank-and-file voters are totally unaware of the blatant attempt to buy the election, install a permanent right-wing oligarchy in control and subvert democracy.

Now you can become informed by attending the free showing of Robert Greenwald’s important film, Koch Brothers Exposed this Wednesday evening, August 29 at 7 pm in the Leucht Conference Center at McHenry County College, 8900 Route 14, Crystal Lake
.
The film is being sponsored by the MCC College Democrats and the Democratic Party of McHenry County.

Come check it out and bring a friend or three.
Posted by Patrick Murfin at 11:10 AM