The Summer of ’68 Chicago Style—The Shit Hits the Fan 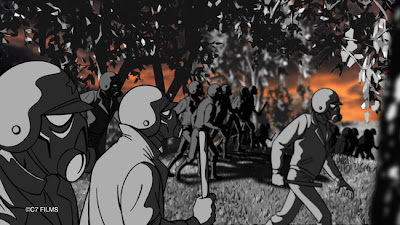 Note:  Fourth in a series of re-posted memoirs.  In which I meet the Cops—twice—and things come to a head in Lincoln Park Sunday night.
The high school kids at the Movement Center at the Methodist Church on Diversey staggered out of their bed rolls late on Sunday morning. The church service upstairs finally woke the last of them. We served them a breakfast of Cheerios in re-constituted non-fat dry milk, powdered eggs, toast, and coffee made by the gallon in an industrial urn. Breakfast conversation was confined mostly to grunts and groans. A few asked about the day’s activities as if they were back at summer camp.
We slapped together more peanut butter and jelly sandwiches and wrapped them in waxed paper as rations for the day. As they straggled out the door, a few of us cleaned up the kitchen. I hauled a couple of galvanized garbage cans out to the dumpster in the ally. As I was heaving the second one in, I was surprised by two burly guys.
“We wanna talk wit you,” one of them said. My mind flashed on dialogue from an old gangster flick. Luckily I restrained myself from replying, “What about, flatfoot?”
It turns out they wanted to know just who was inside. “We know the SDS is here. You one of them?” “No” I replied quite truthfully. Having no SDS chapter at Shimer, I had never taken out a card.
“We know who’s in there, we just need you to confirm it,” the second cop said. “It’ll go easier on you if you do.” He rattled off a couple of names I didn’t recognize anyway. They could have been there, but I was blissfully ignorant.
We danced around for a bit, me not giving any info, them asking questions they knew I would not answer. After a few minutes another guy emerged from the Church with more garbage. He took one look at us and ducked back in.
“Well, I guess that’s all we need,” said cop #2. They let me go and climbed into a dark sedan. I realized that the whole point of the exercise was for me to be seen talking to them. They hoped that the others would assume I was a spy. Did it work? I have no idea.