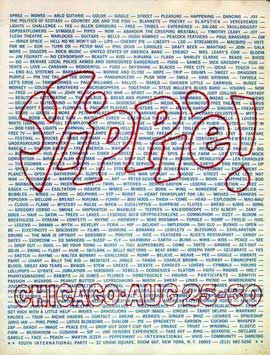 Note: Continuing the serial publication of my memoirs of that fateful summer.  This entry contains new, never before posted material about a visit to the land of the limousine liberals to see Gene McCarthy.

The party at Claire’s was not the only time I got into the city that summer. I was weekly visitor. I had signed up for a class at something called the Free University at Roosevelt College. Every Wednesday I made the long trip via the Skokie Swift and the El to take a class with Staughton Lynd.

Lynd was a pretty big deal in those days in left wing and academic circles—a prolific writer who had lost his job a Yale for his activism and outspoken opposition to the war, leader of delegation to Hanoi, adviser to SDS and pal of Tom Hayden. He had relocated to Chicago to give community organizing a go.

To tell the truth, I remember more about those long train rides, reading Ramparts, Evergreen, The Progressive and other lefty magazines than I do about the classes. That is until the one where Lynd suggested that we try to document the demonstrations planned for the upcoming Democratic National Convention as “participant observers.” That got my attention. One after another student’s volunteered for this or that demonstration, march or program—mostly serious and sober actions by recognized liberal and radical groups or Clean for Gene McCarthy supporters. But no one picked the obvious one.

“Doesn’t anyone want to do the Yippies?” Lynd asked. Immediately my hand shot up. I’m not sure why. I didn’t know much about them except that the press was outraged, City Hall was in a near panic at being invaded by hoards of drug crazed hippies who were probably planning to put LSD in the water supply, and it sounded like fun. Looking back on it is possible that my classmates may have known something I didn’t.

A week or so later on a hot night, I made my way to the one place in Chicago where I knew any Yippies could likely be found—the offices of the underground newspaper The Seed then on LaSalle Street just south of North Avenue within blocks of ground zero for the staging area for the Yippies in Lincoln Park.

The door was wide open to a dimly lit, cluttered and chaotic office a few steps below street level. Two dudes with suitably long and unkempt hair were sweating over a table. “Hi!” I said, “I’m looking for Abbie Hoffman or Jerry Rubin.” I was greeted with incredulous stares and deep suspicion.

Let’s review how I looked that summer—the frayed white short sleeve salesman-cast-off shirt, the store brand jeans with the cuffs turned up, the heavy Wellington work boots, the natty red kerchief knotted at the throat, scoungey orange goatee, thick horn rim glasses, topped by a battered white Stetson. I looked like I may have just graduated from the J. Edgar Hoover Academy for Stool Pigeons and Spies.

“They’re not here,” one of the guys said without volunteering any information on their whereabouts or how I could contact them. I could have been staring at both of them that very minute and I wouldn’t have known it.

A brief but cool conversation followed. I was beginning to detect full blown drug induced paranoia from them. But they did give me some handbills and other information about the publicly announced plans for Convention week, all of which relied on free camping at the Park.

Armed with this intelligence, I retreated to Skokie to contemplate my next move.

***
The weekend before Delegates and protestors would start pouring into the city, my best pal from high school, Jon Gordon, invited me to go with him to the New Trier Township Democratic Party picnic at the home of the Township Committeeman Lynn Williams.

North Shore Democrats were liberal oddities in the mighty Cook County organization then under the iron fisted leadership Mayor Richard Daley himself.  And Williams was the most flaming of all of them.  His organization endorsed Eugene McCarthy.  This year the annual picnic was more than just a gathering of local liberals, it was playing host to the first wave of Clean for Gene volunteers pouring into the city to get ready for the Convention.  McCarthy himself was supposed to make an appearance.

New Trier was right north of Niles Township where Jon and I lived in the World’s Largest Village, Skokie.  Their high school team was the main rival to all three of the Niles Township schools.  It included the tony suburbs of Wilmette, Kenilworth, Winnetka, and Glencoe.

I knew it would be different.  How different, I had no idea.

As we drove north we left the tidy ranch houses and duplexes of Skokie.  Soon we were in an area of large older homes, then into the countryside where thick foliage hid winding driveways to secluded mansions.  We turned into one lane and after a surprisingly long drive came upon a large expanse of lawn that could have passed as a nice high country meadow by in Wyoming.  Volunteers were directing traffic to park in neat rows on the expanse.  Jon’s old jalopy pulled into a spot amid a show case of Cadillac’s, Imperials, big Buicks, and, yes, even a Rolls Royce or three.

We were directed around the impressive main house—four times the size of anything we called a mansion back in Cheyenne—to an even larger back yard.  A professional stage was built at one end.  Rows of grills were smoking.  Picnic tables were scattered around and folding chair set up in front of the stage.  There was a tent with multiple kegs of beer and a full wet bar attended by bartenders in snappy white jackets and bow ties.

I was dumb struck.  I had never seen anything like it.  I didn’t even have a clue that this kind of life style existed.  I was not the only one.  A lot of the well scrubbed McCarthy Volunteers seemed equally out of place.  I talked to several.  Nice people.  Extremely earnest.  The girls well coiffed in perfect flips and uniformly fresh faced and beautiful.  In my battered Stetson, boots, jeans and flaming goatee, I didn’t blend in.  But several of the guys said that they looked a lot like me before they joined the campaign.

Jon drifted off to talk to people.  He knew a lot of big wigs because his father was a leading Skokie liberal.  After wolfing down a couple of juicy burgers, I headed to the beer tent where I was delighted to find that despite looking like a hobo, I could have all of the cups of suds I wanted.

As I recall the program started with a Dixieland band in red vests and straw boaters.  In those days for some reason, Dixieland bands were the expected music of all big political events.  The parade of dignitaries was impressive.  Adlai Stevenson himself, for christsake—Jon later even introduced me to him and I got to shake his hand—and Abner Mikva who was running for what would be his first term in the House of Representatives, a parade of State Representatives, Senators, and local Mayors.

Then of course there was McCarthy himself, urbane, self-depreciating, and surprisingly witty but exuding limited charisma.  It didn’t seem to matter.  The volunteers crowded the stage to be near their hero.  The well heeled gentlemen and ladies of the New Trier organization were on their feet cheering just as loudly.  Everyone sported a McCarthy button with its distinctive blue ribbon.

Somewhere amid the parade of politicos, Phil Ochs took the stage.  It was the first time I had seen him.  It would not be the last.  Through the whole convention he seemed to be everywhere playing for New Mobe rallies and marches, and for the Yippies in Lincoln Park.  And here he was playing for the folks who still had faith in the system.  We were all the same to him.  And everywhere he went, he played the same four song set beginning with I Ain’t a Marching Anymore.
***
The Friday before the Convention was my last day at the air conditioner plant in Skokie. Joe, the Iranian foreman knew that I was not due back at college for two weeks and was put out that I was leaving early. I had spent the summer covering for vacationing workers in different parts of the plant. I had rotated through sub-assembly, polishing and buffing, coil making, and the final assembly line. Despite a few mishaps, I had apparently done well enough to be asked to come back to work over my six week semester break.
My co-workers viewed my plans to leave work to participate in what was being advertised in the hysterical press as a planned riot with some amusement. Ralph, the chief inspector, a middle aged man with a grey brush cut and the only Hitler mustache I ever saw on a live human being, had opinions on the limits of free speech. He considered himself the plant intellectual. Because we both read books at lunch time, he had taken a reluctant shine to me, even though I may have been the cause of more air conditioners being rejected than any other worker.
On the whole I got a warm send off from most of the guys. Buckwheat—I’m not making that nickname up folks—the skinny black dude with the pomaded hair, pegged pants and Cab Calloway moustache who ruled the tool room, Mingo the grinning little Mexican dude and gang banger proud as punch of his club sweater who was always asking me to line him up with hippy chicks, Roy the young hillbilly who introduced me to the joys of listening to country hits of WJJD as we sweated in sub-assembly, the assorted Pollacks and D.P.s on the assembly line. They were all so cheerful that I suspected there was a pool on the date and time of my demise.