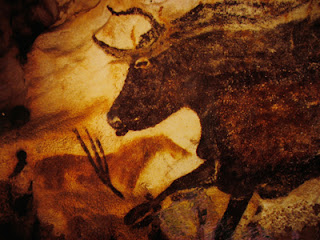 On September 12, 1940 four teenage boys chasing their dog Robot into a partially obscured cave mouth came upon something extraordinary.  Marcel Ravidat, Jacques Marsal, Georges Agnel, and Simon Coencas stumbled upon a vast trove of paintings on the walls of the cave complex near the village of Montignac, in the Department of Dordogne, France.
The Lascaux Cave complex was eventually found to include several rooms or galleries including those designated as The Great Hall of the Bulls, the Lateral Passage, the Shaft of the Dead Man, the Chamber of Engravings, the Painted Gallery, and the Chamber of Felines.  Together they contain more than 2,000 figurative pieces, mostly of animals and abstract patterns of dots and geometric figures.
The most commonly represented animals are horses, 364 images, and stags, 90 images.  Among the most impressive are aurochs or bulls, one of which is depicted in a painting 17 feet long.  Other animals shown include bison, bear, rhinoceros, cave cats, and a bird.  The animals were executed in color with, often with great skill.  They were presented in profile, but with heads turned to that features like two horns could be seen.  Many appear to be in motion.  There is only one depiction of a human, the so-called “dead man” who appears to be lying prone on his back.  This figure is rendered with considerably less skill than the animal images that surround it making scientists wonder if it was a standard stylization—or even graffiti from a stone age vandal.
The paintings were made over an extended period of time, some images overlapping and obscuring earlier pictures.  The earliest images have been carbon dated to about 17,000 BC and images continued to be added over the next 2,000 years.  The artists were the modern humans who supplanted Neanderthals in Europe about 40,000 years ago.  The earliest images are already so well developed that scientists assume some form of painting—perhaps on perishable hides or bark—had been developed over a long period predating the work in the cave.  At any rate, the sophistication of the images completely revolutionized how scientists viewed Paleolithic humans and their culture.
Lascaux and similar discoveries in caves around southwestern France and northern Spain, were apparently never used as habitations but were visited over millennia for ceremonial purposes.  Many caves are oriented so that a setting sun on or near the Winter Solstice would illuminate an inner wall.  This has led some scientists to conclude that dot patters, or even major points on some of the animal paintings, may depict the stars in the night sky as they would have been seen thousands of years ago.  Some have said that they have matched patterns to specific constellations or portions of the sky.
Others believe that the paintings are meant to summon game and that chambers where images have been painted over may represent rooms that the artists believed were successful.  Yet the most common food source for these people, as identified from fire pits in inhabited caves in the same area, was reindeer which are entirely missing from the walls.
After World War II as images of the cave paintings circulated, Lascaux became a tourist attraction with thousands of visitors a year.  By 1955 carbon dioxide produced by 1,200 visitors per day had visibly damaged the paintings. In 1963 the cave complex was closed to the public.  The paintings were restored to their original state and monitored daily.
In 1979, Lascaux and other prehistoric sites in the Vézère Valley became  UNESCO World Heritage Sites.   Lascauz II, with reproductions of paintings in two of the main rooms, opened to the public in 1983 just a few hundred yards from the cave entrance.
Despite the precautions, and possibly even because of air conditioning installed in the cave for climate control, damaging black mold was found invading the site in January 2008 and the cave was closed for three months even to scientists and preservationists.  It has been re-opened only on a very restrictive basis.  The mold has not yet been eliminated, and attempts to remove it in some spots have left a black smudge obscuring a few images.  The integrity of the whole complex and it priceless contents remain in jeopardy.
Posted by Patrick Murfin at 1:51 AM