The Summer of ’68 Chicago Style—The Whole World Was Watching 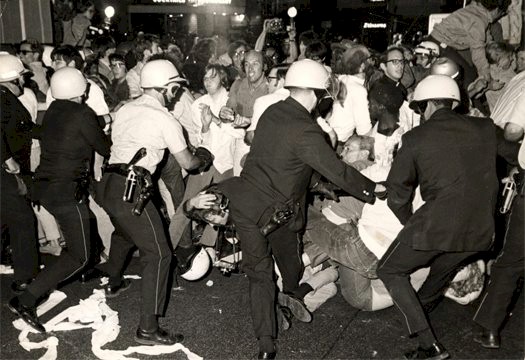 Note:  The eighth in a series of memoir stories.  Wednesday night of Convention week—the Battle of Michigan Avenue.

I was accidently near the head of two or three hundred folks trying to find their way out of Grant Park when we finally found an open bridge over the rail tracks at Monroe Street.  To our astonishment the Poor People’s Campaign Mule Train was coming down Michigan Avenue heading south.

If things had worked out differently in Memphis that April, Dr. King himself might have been in the lead wagon.  The Poor People’s Campaign was his dream to unite the poor of all races into a new movement for economic justice.  But he was dead and Ralph Abernathy was left to carry on.  He was on the seat of the lead wagon dressed in overalls.  The mule train was meant to recall the promise of 20 acres and a mule free and clear to Freedmen after the Civil War.  Their presence in Chicago was really just to publicize a planned encampment in Washington to pressure Congress for a whole new economic deal for the poor.

Most importantly, the Poor People’s Campaign had secured what almost no one else had—a permit to drive their wagons right up to the doorstep of the International Amphitheater.

We surged over the bridge and joined the procession.  Others were already with them.  More joined as we inched South filtering in from the Park or coming from elsewhere in the city.

To tell the truth Abernathy and his people did not look exactly thrilled to find their wagons suddenly engulfed by disheveled youth, many of us still reeking of tear gas or nursing wounds.  They had good reason to believe that their permit would not be honored if we were with them.  And these folks who had themselves endured so much police violence in the South, worried that we would draw the same response down upon them again.

It is only a few blocks south from Monroe to Balbo.  But at the methodical, plodding pace of the mule drawn wagons and as we clogged the street with swelling numbers, it took almost an hour to reach it as the police scrambled to get a large force in front of us and redeploy the forces from Grant Park and other sites in the city.

When we finally reached Balbo, the cops had enough massed force to block the march further south.  The marchers pushed up tightly, filling Michigan Ave and spilling into the edge of Grant Park.  It looked, as best as I could tell in the press and confusion, that the crowd stretched back a block or more, but there were probably no more than a couple of thousand folks.  It was a standoff.

As the crowd went into a chant after chant, Abernathy and his people negotiated with the police.  Eventually, they were allowed to pass, but the cordon of cops quickly closed and blocked the rest of us.

I was getting uncomfortable in the crowd. I noticed that the side walk was clear right around the corner on Balbo across from the Conrad Hilton.  I stepped over there to get my bearings.

The light was fading to dusk when I heard my friend Amy Kesselman’s voice.  She had found me again after we had been separated at the Band Shell earlier.  At six foot two and wearing the only cowboy hat around, it was a lot easier for her to find me.  I would never have picked all five foot nothing of her out the crowd.

We tried to decide what to do.  Amy wanted to find other staffers from the Movement Center.  She thought that they were well back on Michigan.  Since there was no way to push through the crowd on Michigan, we decided to head north on Wabash then cut back to the Avenue.

There were some cops forming on Wabash, so we went on to State.  It was amazing.  Life seemed to be going on as normal.  The sidewalks bustled with ordinary folk going about their evening as if nothing at all extraordinary was occurring two blocks over.  We cut back to Michigan and sure enough found ourselves to the rear of the crowd.  But a glance made it clear that it would be unlikely that we would connect with the others.  Now Amy wanted to go back where we started because she was sure things were going to get interesting.

She spotted a cab coming down Michigan.  She grabbed my hand and said “come on!”  We hopped in the cab.  Amy asked to go to State and Balbo.  The driver looked disgusted, whether at the short fare or our appearance.  But just as he was getting ready to pull away from the curb, the door of the cab flew open and two guys tumbled in.  Both Looked the worse for wear.

One of them was Tom Hayden.  He was babbling a non-stop monologue that didn’t seem to make much sense.  “He thinks he’s Thomas Jefferson,” the other guy explained.  I’m not sure if he had gotten bopped in the head at the Band Shell like Rennie Davis or if maybe Abbie Hoffman had shared some dope with him.  Anyway, the second guy said, “We gotta get him to safety.”  He mentioned the name of a Loop hotel.
After delivering Hayden and his pal to safety, we took the cab back to Balbo.  Amy must have paid, because by this time in the week I was down to pocket change.

It was full dark by the time we got back to where we started, on the Balbo sidewalk directly across from the entrance to the Hilton’s Haymarket restaurant.  Bright TV lights shined down from the upper floors of the Hilton, the official convention headquarters hotel were the media and many delegates were encamped.  We could barely make out a line of blue helmets across Michigan.  Protestors surged against them from time to time.

Suddenly, a large phalanx of cops appeared from Wabash and massed on Balbo.  They had their batons out and looked like they meant business.  They marched in military formation right down the street sweeping passed us on the sidewalk and plowed into the mass of demonstrators, clubs flaying.  The cops along Michigan joined the fray.  I am told that another unit hit the crowd on Michigan from the rear.

If you were alive and sentiment in the ‘60’s you probably remember the scene, which was broadcast live on network television shooting the action from Hilton windows.  The police violence that had largely been hidden from public view all week was there for the nation to see in all of its savagery.

It was like we were invisible on our side of the street, still in the shadows not illuminated by those lights.  Folks right across from us in front of the Haymarket were not so lucky.  Several of them looked to delegates, staffers, and others associated with the convention, not protestors.  But a handful of cops waded into them with gusto.  They pushed a couple of them through the plate glass window of the restaurant.

Some of the wounded began to straggle up our side of the street hugging the building for safety.  We guided a couple of them back up the street toward Wabash where I set up a kind of rough aid station using the first aid kit on my utility belt and more of my dad’s handkerchiefs.  Amy ferried more to me as I dabbed blood and washed tear gas from eyes until my canteen was dry.  I was soon out of what meager supplies I had.

Amy and I and our patients were still in danger.  Squads of cops were now breaking off chasing demonstrators.  We told our charges to scatter as they were able.  We helped a couple get to State Street.  We clamored down the stairs to the subway and headed north.

We evidently we just ahead of adrenalin pumped squads of cops who swept up Wabash and State beating any one they could find, including folks emerging from theaters.

We got off at Diversey and stumbled into the church Movement Center exhausted. Amazingly it was not yet 11 o’clock.  We huddled around the radio trying to find out what was happening.

The Battle of Michigan Avenue waned, but cops kept sweeping for stragglers all night.  In the morning they even charged into the hotel where they raided McCarthy headquarters, which had taken in several wounded demonstrators.  They beat everyone in the room.