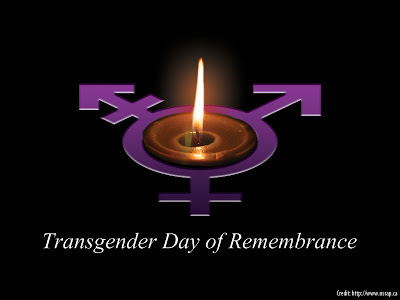 But someone must remember these transgender people murdered every year simply because of who they are.  According to Transgender.org more than 50 victims have been identified worldwide just so far in 2012 and are remembered in its pages.

Like so many memorial days do, the International Transgender Day of Remembrance had its origin in grief.  Rita Hester was a transgender African American woman murdered in Allston, Massachusetts on November 28, 1998. An outpouring of community grief and anger led to a candlelight vigil held the following Friday, December 4 with 250 people in attendence.

This vigil inspired the Remembering Our Dead web project and the International Transgender Day of Remembrance.  Gwendolyn Ann Smith, a transgender graphic designer, columnist, and activist helped organize the first public vigil in honor of all victims the next year in San Francisco in November of 1999.

Since then, the observation has spread across the world. In 2010, the occasion, now held annually on November 20, was observed in over 185 cities in more than 20 countries.

Many local, national, and international organizations now participate in and promote the Day of Remembrance.  I am proud to say that the Unitarian Universalist Association and the Standing on the Side of Love campaign have played a leading role.  Both provide resources and materials that can be used in organizing local observances or worship services.  Many UUA congregations include some part of their services this time of the year to the memorial.

Materials for services can be found on the Standing on the Side of Love web site.  They are instructive and moving to read even if there is no local vigil or service to attend.