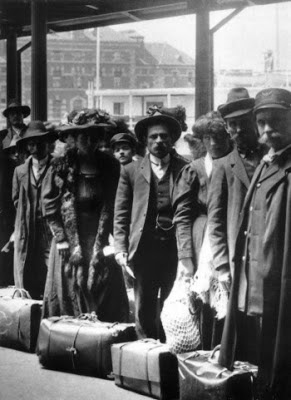 Note—This entry first appeared on this date in 2010.  Earlier generations of xenophobes and Nativists slowly choked the wave of immigration that once flowed through Ellis Island to keep “real Americans” from being swamped by a rabble of people from unfamiliar lands speaking odd languages, most of them Catholic or worse Jewish.  Some were steeped in European radicalism.  The clamp down bought a few decades of continues supremacy and authority for the descendants of earlier settlers of Northern and Western European Protestant stock.

But the current xenophobes who now wear the Republican Party as their cover and identity, had a nasty surprise—they are no longer a majority.  In fact, minorities of various hues, language, and sexual predilection combined to swamp them in the election this fall and returned a Black man to the White House.  Now all of those Wops, Slavs and the dregs of the Polish and Russian shtetls that never arrived were sorely missed.  They could have been trained to think of themselves as White and been a bulwark against the Black, Brown, and Yellow hoards who turned out to be far more alien and frightening.

Posted by Patrick Murfin at 7:52 AM