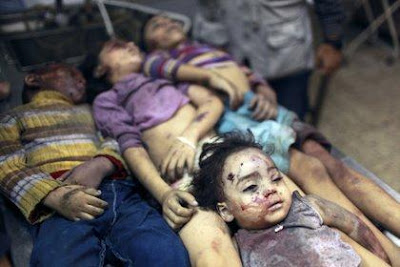 Yesterday, I posted on Facebook a stomach wrenching picture of four dead children killed in an Israeli air strike against Palestinians in Gaza.  I find today that the image has been deleted from my page.  Perhaps someone was offended.  Above is a different picture of the same dead children.  Don’t avert your eyes.

The reaction was predictable.  Most folks were horrified and rushed passed it for another comforting round of cute kitten posts or pithy, snarky remarks immortalized in little placards.  You know the kind.  Those sympathetic to the Palestinian cause seized on it to denounce Israel for war crimes and genocide.  The four dead babies just the latest got ya in an endless round of glorified martyrdom.

My Israeli and pro-Israeli friends were outraged.  You don’t understand, they practically screamed through the screen at me.  At best I was a dupe, at worst an anti-Semite.  The ever useful tape of a British officer testifying at the United Nations that in an earlier attack on Gaza the Israel Defense Forces (IDF) acted to limit civilian casualties in a way “unprecedented in the history of warfare.”  As if, true or not, it made those children any less dead.  And then, of course, some one posted a picture of Israeli children injured by a Palestinian rocket.  Sort of “my kids trump your kids, so there!”

It all seemed so familiar.

Back in the 1990’s I was struck by a news photo from Rwanda.  It showed a field of Hutus hacked to death by a mob of Tutsis who were avenging an earlier massacre by the Tutsis against their Hutu neighbors in a real attempt at genocide.

The poem Nits Make Lice came to me from that image.  I read it one Sunday in a peace service at what was then still known as the Congregational Unitarian Church in Woodstock.  Most folks zone out when someone starts to spout poetry, particularly long poetry.  Bur enough folks were listening that there was an audible gasp when I got to a certain passage.  I was pulled aside later by the Worship Committee Chairperson and scolded.  The poem was entirely unsuitable for a Sunday morning.

After 9/11 and during the wars against Iraq and Afghanistan, Nits Make Lice was one of several poems that I read at Poets Against the War programs, at demonstrations and rallies, and in speaking engagements at the local community college.

My editor at Skinner House Books refused to include it in my 2004 Meditation Manual, We Build Temples in the Heart.  It seems that being shown the naked brutality of war and the wild animus that justifies any horror was not suitable for an audience expecting uplifting, inspirational verse.

Yesterday’s picture and the reaction to it tell me that it is time to resurrect what I think may be the most important poem I have ever written.

Somewhere in Africa a small boy lies,
his mother's reedy arm stretches over him, a perfect picture of sweet repose
until a closer look reveals his spilling brains
and his mother's head, half severed,
stares backward at her crumpled feet.
Pull back and see a hundred dusty lumps like them.

The horror of that dead child shakes us,
taps wellsprings of pity
and of blank incomprehension
at an alien ferocity.

“Nits make lice” the old hero said
when some irksome scribe inquired about
the latest massacre on the plains-­
about the private parts of mere squaws
cut out and stretched over troopers’ pommels,
about limp and tattered ragbag babes
tossed from saber tip to saber tip
in a macabre game of polo.

And in the relentless logic of war,
it is utter and irrefutable truth
that today’s laughing toddler may,
in fifteen years or so,
draw a bead upon your own beloved child .

Better, after all, much better
to kill him now to save lives later,
to cast off foolish sentiment,
that useless relic of Victorian ladies
swooning with the vapors
over the innocence of youth.

And so our resolve firms
and our methods,
honed by enlightened science far out-strip
the stumbling, drunken troopers wild careen
against a sleeping village
until whole cities of breeding,
pestilential vermin
may efficiently be incinerated .

Something in us stirs still at that
dead Tutsi child, yearning to save his life,
or failing that, to end the carnage,
before the play of others is macheteed away.

Impossible, impossible to save that child alone-­
the mother, too, and aunts and grandmas, brothers, cousins, fathers--
even the wild-eyed ones who first
wet their knives on Hutu babes
and opened Pandora’s Box of sweet revenge—
all, all must be valued as the boy,
to save one, all must be saved.

To save the nit,
we must even love the louse.