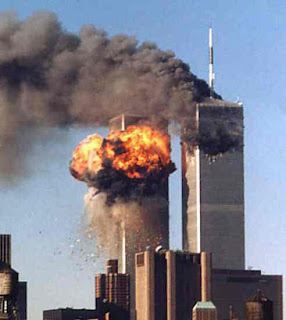 I am sick, heart sick, of writing about September 11, 2001, the fall of the Twin Towers, the horror and the agony every year when the anniversary rolls around again.  Yet it seems inevitable, even somehow necessary.
This year I yearned to commemorate another black anniversary instead—the Chilean Coup of 1973—forty years ago today.  But the subject was so vast, the details, all essential to a real understanding of what happen on an early spring day in the Southern Hemisphere, too complex.  I read.  I studied.  I began to write and I could see that a book, not a blog entry would be needed, particularly because the memory has been obscured and erased for Americans who do not want to be reminded of the atrocity on our own hands, preferring to wallow in in the victimhood of one perpetrated against us.

I wanted to describe the perfidy of the Generals and Admirals, the collusion of American companies like ITT, the last stand of President Salvador Allende in La Moneda  presidential palace, the viciousness of the oppression, the soccer stadium jammed with 40,000 waiting for a thumbs up or down on life, the thousands of the disappeared, and the years of terror under the Junta and the strutting martinet usurper Augusto Pinochet.
And I wanted to once again lay bare the deep responsibility of the United States Government and all of its available organs, not the least of which were the United States Information Agency (USIA)—dispenser of black propaganda against Allende’s socialist government, aid agencies, the Central Intelligence Agency (CIA), the Defense Intelligence Agency (DIA), the highest echelons of the State Department, and—with just a thread of plausible deniability—the Nixon White House even as it tottered to its own demise.


I wanted to detail the undeniable facts of American complicity and bloody hands as laid out by the Senate Church Committee in its 1976 investigation in which Senator Frank Church concluded, “Like Caesar peering into the colonies from distant Rome, Nixon said the choice of government by the Chileans was unacceptable to the president of the United States. The attitude in the White House seemed to be, ‘If in the wake of Vietnam I can no longer send in the Marines, then I will send in the CIA.’”  And the horrors uncovered by the Chileans themselves when Pinochet was finally removed.
I wanted to say how deeply personal it was to me.  While I was in Sandstone Federal Prison in 1972, as the relationship between President Allende and the bought and paid for Chilean Congress deteriorated to the point where a coup or civil war seemed inevitable, I thought I might go there when I got out—perhaps the absurdly romantic notion of someone who had immersed himself in reading about the Spanish Civil War during my incarceration.
Of course I did not go.  I returned to Chicago and my activities with the Industrial Workers of the World (IWW), including service on the editorial collective of the Industrial Worker.
But another Draft Resistor and Wobbly the same age as me did.  Frank Teruggi was a committed activist with Chicago Area Draft Resistors (CADRE), Chicago Area Group on Latin America (CAGLA), New World Resource Center, SDS organizer at Caltech, and writer for FIN Fuente Norteamericano de Informacion magazine (FIN). Nine days after the coup Teruggi, who was studying at the University of Chile in Santiago, was arrested by Carabineros, para-military police at his home with his roommate, David Hathaway. Both men were taken to a local police station, and then to the National Stadium. Two days later, his body was delivered to the city morgue bearing signs of torture and multiple gunshot wounds.  The government claimed that they had released him and even that he may have been killed by pro-Allende forces who suspected him of collaboration.
The story of Teruggi’s father’s desperate search for information on what happened to his son became the inspiration for Missing, a 1982 American film directed by Costa Gavras, and starring Jack Lemmon and Sissy Spacek.
But long before that, in late ’73 the Industrial Worker received bundles of letter written to his father and others which I edited and published as a series Frank Teruggi’s Last Dispatches.
Teruggi’s fate, no matter how personal to me, was just one abomination among thousands.  Hundreds were killed over the next few years and at least 3,000 simply disappeared without a trace, undoubtedly murdered and buried in secret.
I wanted to tell you about all of it so you wouldn’t forget.  So that the images burned as brightly in your mind and memory as any falling bodies from the Twin Towers.
But, alas, I have had to throw my hands up in despair.  The best I could do was this:

I’ll ante my 3,000 vaporized on a crystal morning.
You’ll see me your 3,000 homeless ghosts.
I’ll give you my crumbling Towers and billowing ash.
You will call with the bombed rubble of La Moneda .

I’ll throw in a stack of terrorists with beards and turbans.
You’ll count out freckled faces, crew cuts, and black fedoras.

Let’s show our cards and see who loses.

Posted by Patrick Murfin at 4:48 AM