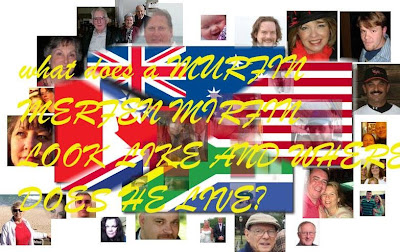 It may have escaped your attention but today is International Murfin Day!  Break out the Champagne!  Bring on the dancing girls!  Pass the biscuits and jam!  Some Murfins are more adventuresome than others, you see.
We owe this fabulous observation to Charles Edward Murfin, Jr. better known simply as Ed, a Disciples of Christ minister living in retirement in Jacksonville, Florida.  For years Ed has doggedly been compiling genealogical info on Murfins around the world.  His astonishing diligence has resulted in detailed family line histories, some going back far into the mists of time, which he shares at http://www.murfingenealogy.com/ .
Not content to just do the research, Ed’s dream is to connect Murfins everywhere and all of those with the many variations on the name.  His motto is “All Murfins should be friends.”  Murfins can be found from ancestral England to Ireland (Ulster), Canada, the United States, Australia, New Zealand, South Africa and other locations.
So last year he launched International Murfin to raise public awareness of the name and the many families it is part of, and possibly to turn up yet more Murfins and more information that may be able to fill in the inevitable blanks and gaps of any family history.
To this end he is encouraging public messages—letters to the editor, articles in local papers, and maybe even blog entries like this.  Also he is hoping to get all of the major search engines to really notice Murfins by encouraging folks to log on to Google, Bing, Yahoo, and/or your other favorites and enter a search for Murfin.  Go ahead now, do as you’re told.  I’ll wait for you to finish and you can come back and finish this.
Back so soon?  You probably noticed a lot of entries, including local businesses, and numerous individuals with Facebook or other social media pages.  But several names keep repeating.  These best known Murfins include such historic figures as Admiral Orin Murfin who commanded forces who searched for Amelia Earhart and compiled the official U.S. Navy report on the attack on Pearl Harbor: playwright/screen writer Jane Murfin; and less happily, Melody Ann Murfin, a drug addicted prostitute who became a victim of Seattle’s Green River Killer.  Ed’s late brother James V. Murfin was a noted historian of the U. S. Parks Service and author of one of the very best Civil War battle histories, The Gleam of Bayonets:  The Battle of Antietam and Robert E. Lee’s Maryland Campaign.
Contemporary notables include Ross C Murfin, a professor of English and administrator at Southern Methodist University, who’s literary criticism is widely admired; Justin Murfin, an assistant professor of finance at Yale; and David Murfin, the owner of Murfin Drilling, the leading oil exploration company in Kansas and recipient of several industry awards.  There are two contemporary British writers,  poet memoirist Geraldine Murfin-Shaw who has written under the pen name Val Kirkham, and romance novelist Pauline Murfin.  My nephew Ira S. Murfin, a playwright, performer, and poet, is a Murfin with a bullet by his name as an up and comer.e
Because of this blog and my books, my name pops up embarrassingly often on some of the search engines when compared to honest folks.  As I have noted before, I dangle precariously from the family tree—an adopted son with no actual Murfin blood.  Ed is generous about including me anyway.
Growing up, we were told that our name was derived from the Irish Murphy, and had been changed when our ancestors arrived in the U.S. after the American Revolution.  Although the time frame for the arrival was seemingly correct—a Pennsylvania Long Rifle made about 1785 which got a replacement barrel in Cincinnati, Ohio hangs on my living room wall and has been handed down for generations—the origins were not.  Much to my own personal astonishment, Ed’s research showed that Murfins originated in Great Britain.
Some researchers identify the name as Welsh in origins.  Others cite Northumberland just south of Scotland which had a large Celtic population.  Both origin tales trace the name to variation on Merlyn, the legendary Druid or Wizard who figures prominently in the Arthurian legends and other folk lore.  Many Murfins can still be found in the north of England in Yorkshire and a little further south in Derbyshire.  One of those Murfins was Sir Thomas Murfin who became Lord Mayor of London in 1518.  A good many Murfins were apparently Round Heads—Puritans—in the English Civil War.
There are many variant forms of the name.  The oldest known form is the Gaelic Myrddin (Merlin) which was first found in an Anglo-Saxon form as Mervin in the Doomsday Book of Durham in 1086.  Other early variations were Mirfyne, Myrfyn and Mirfin. More modern variant spellings include Marvin, Mervin, Mirfin and Mervyn.  The Murfin spelling seems to have first been used in the 15th Century.

Accompanying this entry is a rendering of a coat of arms apparently awarded to some Murfin at some time.  By right only belonged to the gentleman to which it was originally granted or  his immediate family.  However different companies market this and other arms as the official Murfin family crests and images can be purchased on coffee mugs, t-shirts, and even mouse pads.  Or framed to hang on the wall like the copy I got for Christmas one year.  Almost assuredly by the rules of Heraldry virtually no modern Murfin is entitled to use any of them.  But that doesn’t stop us.
Like any clan with wide tendrils, there were undoubtedly as many horse thieves, drunks, and bigamists in our lineage as heroes, gentlefolk and scholars.  None the less, today we celebrate them all.
Now, get back to those search engines so Ed won’t be disappointed.

Posted by Patrick Murfin at 3:36 AM