As We Go Marching, Marching—For Marriage Equality in Illinois 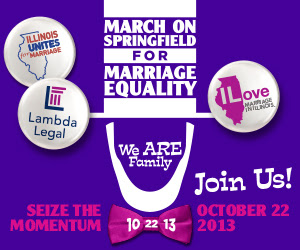 When the Illinois General Assembly reconvenes on October 23 for its fall veto session, it will have its hands full of weighty issues.  At the top of the list is the state’s ongoing fiscal crisis and conflicting pension reform proposals that we are told are key to a long range solution.  Legislative gridlock in Springfield over these issues would almost make Congress jealous.  Some argue that the crisis is so grave that legislators should conduct no other business until these thorny issues are disposed of.  The loudest proponent of this view, which he will share with any microphone or TV camera within shouting distance, is McHenry County’s Rep. Jack Franks (D-63).
But the legislature also has other important business at hand.  Notably dealing with what has been called the Civil Rights issue of our time—marriage equality.  In point of fact Jack and others like him are just dodging a pesky issue.
Freedom to Marry, a national organization promoting marriage equality state-by-state nicely summed up a brief history of action on the issue in Illinois:
On January 12, 2011, Gov. Pat Quinn signed the Illinois Religious Freedom Protection and Civil Union Act into law after it was approved by the state legislature in December 2010.  The law provides some protections to same-sex couples and their families, but these protections are no substitute for the full measure of respect, clarity, security, and responsibilities of the freedom to marry. It took effect on June 1, 2011, when the first civil unions in Illinois occurred.
In February 2012, Rep. Greg Harris introduced the Religious Freedom and Marriage Fairness Act in the House. Despite vocal support from Gov. Quinn and other critical leaders, including Chicago Mayor Rahm Emanuel, the bill stalled, and in 2013, on January 9, legislators introduced marriage bills in both houses of the legislature again.
On February 14, Senate voted in favor of the bill. The marriage bill advanced through a House committee in 2013, but the session ended before the House scheduled a vote for the bill.
Until almost the last minute in June, supporters thought that they had a narrow majority in the House to secure passage.  But influential Catholic and religious right lobbies deluged legislators with phone calls, letters, and un-subtle threats and arm twisting.  Previously committed votes began to squirm despite repeated public opinion polls that showed a dramatic shift in public opinion—a majority now supported marriage equality the margin was growing almost faster than it could be tracked.
Shaky supporters included socially moderate suburban Republicans terrified of a Tea Party primary challenge, urban Black Democrats vexed at loud divisions among influential Black church leaders on the issue, and conservative Democrats like Franks holding on in Republican leaning districts.  Some of these begged sponsor Harris not to call the bill before the end of the session but to, in his words, “give them time to consult their districts.”  Some pledged a yes vote later if the bill was brought up in a special session or—as it turns out—in the fall veto session.
The absolute master of the House, Speaker Mike Madigan, an avowed supporter, could have used his considerable clout to round up enough extra Democratic votes if he had chosen to do so.  But for whatever Machiavellian reason, he chose not to.  Likewise Mayor Emanuel confined himself to lip service support, choosing not to expend political capital on the issue.  Gov. Quinn, a strong supporter, was so heartily disliked by the majority of House Democrats that he had no influence.  Under the circumstances, Harris decided not to call the bill and to “return and fight another day.”
When Marriage Equality supporters got over their shock, grief, and outraged, the mobilized as never before to prepare for the fall session.  Sometimes turf-feuding groups put aside differences and worked together.  One major coalition, Illinois Unites for Marriage hired a high-powered political operative to coordinate a statewide campaign and filed organizers all over the state.  They were targeting “movable” votes with an election style grass roots campaigns in their districts including intensive phone banking and even door-to-door canvasing.  Other organizations focused on working the press, social media campaigns, gathering high profile endorsements, and staging public rally, demonstrations, and vigils.  Some worked to elevate the visibility of religious supporters to show that opponents did not speak for all Christians or all faith traditions.
And everybody got on board for a major event in Springfield this coming Tuesday—the opening of the veto session.  Thousands from all over the state are expected to flood into the state capital to lobby their legislators in the morning and then attend a mass rally and march around the capital.  Gov. Quinn and Senator Dick Durbin are expected to be leading political voices at the rally.  Other speakers will include Michael Carrigan, President of the Illinois AFL-CIO; Rudy Lozano, Uniting America Director, Illinois Coalition for Immigrant and Refugee Rights; Jamie Frazier, Senior Pastor, Lighthouse Church; Bonnie Grabenhofer, National Action Vice President, National Organization for Women (NOW); Rev. Mark Kiyimba, Leader of the Unitarian Universalist Church of Kampala, Uganda; Toni Weaver, President, Parents & Friends of Lesbians and Gays (Northern Illinois Region); Scott Cross, Illinois Chapter Lead, President Barack Obama’s “Organizing for Action”; and Brigid Leahy, Director, Planned Parenthood of Illinois.
Illinois Unitarian Universalists and the Standing on the Side of Love Campaign will be a big contingent.  In fact UU’s will start the day early with a meeting at 10:30 pm at the Abraham Lincoln UU Congregation to launch the Unitarian Universalist Advocacy Network of Illinois (UUANI), a new organization to put our combined energy behind marriage equality and other social issues important to UUs.   Then we will all join the rally on the capital grounds, awash in bright yellow Standing on the Side of love gear.
I’ll be there representing the Tree of Life Unitarian Universalist Congregation in McHenry.  Hope to see some of you there!
Posted by Patrick Murfin at 8:40 AM

Email ThisBlogThis!Share to TwitterShare to FacebookShare to Pinterest
Labels: Freedom to Marry, Illinois Unites for Marriage, March on Springfield for Marriage Equality, Religious Freedom and Marriage Fairness Act, Standing on the Side of Love, Unitarian Universalists