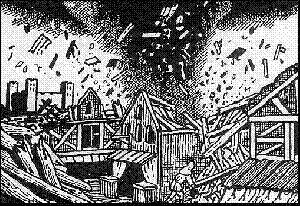 I don’t know how the people of London, England bear up under the sorrow of the anniversaries of two deadly disasters every October 17.  Yet they bravely soldier on.  Their slogan is “Keep Calm and Carry On [Sargent, Nurse, Etc.]”
For the first of these unfortunate occurrences we have to reach back all the way to October 17, 1091.  No that isn’t a typo.  On that date the first tornado ever recorded in the British Isles—and one of damn few since—stuck and destroyed the heart of London.  And it was a dilly, too.  Scientist believe it would have a rating of a T-8 storm—described as severely devastating with rotating winds in the 210-240 mile per hour range.  That is right up there with a major Oklahoma hair raiser.
A small tornado struck London again on September 11, 2007 injuring 7, reviving interest in the earlier visit.
What is most surprising is how small London was at the time.  Not quite a back water, but long passed its glory days as Londinium, the Roman capital of Britannia.  Before the Romans high tailed it out, it had swarmed with an estimated 45-60,000 inhabitants in a city filled with “modern” Roman conveniences and architecture.
But as Britain commenced its long slide into the Dark Ages after 140 CE (AD for you old timers and Christo-centrics out there.)  The island fell into squabbling petty kingdoms then had to contend with waves of invaders—the Angles, Saxons, and eventually the Danes.  London no longer served as a real capital.  Kings with the upper hand ruled usually from their home strongholds, surrounded by reliable knights and men-at-arms.  By the end of the First Millennium only 5,000-10,000 inhabitants remained and most scholars put the population on the low end of that scale.
In 1043 the Danish/Norse King Cnut died and a Saxon, Edward the Confessor became King, more or less, with his base in the southeast around London.  Although he seldom lived there, he began to use the city once again as a ceremonial capital and to that end commissioned the construction of Westminster Abby—the biggest public works project since the Romans.  People began to filter back.  Edward died in 1066 and was laid to rest in the unfinished Cathedral and succeeded by the unfortunate Harold, who lost the kingdom to yet another invader, Norman William the Conqueror the same year at the Battle of Hastings.
William marched on London and the town surrendered in December of that year.  He built a castle there and continued work on the Abby, where he had been crowned.  When he wasn’t on the continent or in the field beating down some rebellion or invasion, he ruled from the city.  When William died in 1087, the population was on a modest upswing, with maybe 18,000 inhabitants.
But except for some Roman ruins, the Abby and William’s castle, most of the city was built of timber, wattle, and thatch.  More than 600 homes and the wooden London Bridge over the Thames were destroyed as were several churches when the tornado struck.   Among the devastated churches was the original building of St Mary-le-Bow, famous in a later incarnation as the home of the bells of which all true Cockney’s are born in earshot.  The power of the tornado was so strong that four of the church’s massive 26 foot long rafters were driven into the ground and buried with only 4 feet exposed.
Remarkably, only two deaths were recorded from the tornado, because the flimsy construction of most homes did not lead to death by crushing when they were destroyed.  Likely, however, there were many unrecorded deaths in the confusion of the aftermath.  Commoners crowded into hovels were not all documented, and many church records were lost.  The lowliest may not have even been deemed worthy of note.
The city, of course, rebounded, with more substantial buildings replacing those destroyed.  Population continued to grow steadily despite numerous “great fires.” Long bouts with the Black Death in 1337 and again in 1665 did actually threaten to depopulate the city again. 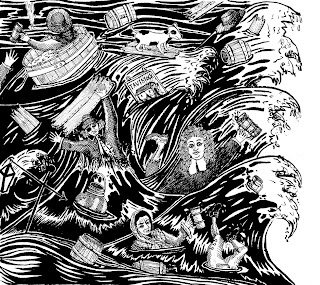 But by 1814, London was not only the largest city in Europe and probably in the world, it was the cocky capital of a robust and expanding worldwide Empire.  Yet once again tragedy struck on the fateful date of October 17 only 723 years after the tornado.
In the Parish of St. Giles—in the heart of the district ravaged by the storm—a135,000 imperial Gallon vat of beer at the Meux and Company Brewery on Tottenham Court Road suddenly ruptured sending out a torrent that knocked over additional vats.  323,000 imperial gallons surged out of the buildings and into the streets in a wall of beer.
The brewery was located in a poor area—some of the homes may actually have dated back to the reconstruction following the tornado.  Families in rags crowded into rooms and into cellars.  Many of those cellars flooded, drowning several victims.   Official records note 6 deaths by drowning and 16 year old Eleanor Cooper, a serving wench at the Tavistock Arms Pub who died when the wall of beer collapsed the walls of the place upon her.  Scores were injured.
Officials prosecuted the Brewer, but the accident was ruled an Act of God.  Since taxes had already been paid on the lost beer, they petitioned Parliament for relief and the return of the paid duties.  No known payments were made to any of the victims or their families.
The brewery was finally razed in 1922 and today the Dominion Theatre occupies a part of the site.
Amazingly, there are no public commemorations of either tragedy scheduled—except at the Holborn Whippet, a pub near the site which began serving a specially brewed porter to be served only on October 17.  There, if you can make it today, you can at least raise a glass to the lost victims of London’s disasters.