Two Medics, One CO, and the Medal of Honor 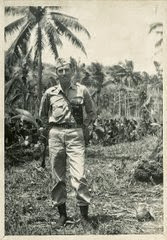 After completing OCS and a brief stateside assignment at Ft. Lewis in Washington state, Dad was assigned duty with the 77th Division.  Like Doss he saw intense action on Guam and Leyte.  Unlike Doss, he quickly learned to take the Red Cross off his helmet and ditch his identifying shoulder patches, pins, and officer’s insignia.  He also was not shy of carrying—and apparently using—a gun.  I have a picture of him on Leyte with a .45 Colt Automatic in a shoulder holster.  He also brought home from the war an M-1 Carbine and a mean looking Bolo Knife, both of which I assume he used.
And like Doss he earned a Bronze Star for a similar rescue of wounded men under intense machine gun fire.  Like I said before, almost routine for front line medical personnel.
Then after a short rest the Division and both men were bound to Okinawa, the last stepping stone to the Japanese Home Islands.  Resistance was long and fierce as the Japanese retreated into caves that honeycombed the rugged mountains of the island.  Whatever happened to my Dad, it was so traumatic that he would not speak of it.  Except once.  Watching a documentary on TV footage of Japanese civilians jumping to their deaths from cliffs rather than surrender came on the screen.  Dad got agitated like I had never seen him.  He had to leave the room.  Later he explained only that he had “seen that.”

Things were even tougher for Private Doss.  On April 29, 1944 his company was part of an assault on Maeda Escarpment, a 400-foot-high ridge overlooking the entire south side of the island infested with machine gun nests, booby traps, concrete pillboxes, and winding caves.  The initial assault had Doss and his company scaled ropes up the sheer cliff face.  Always under intense fire from hidden positions, the men tried to dig the enemy out cave-by-cave, hole-by-hole using flame throwers and grenades.

Early in the morning of April 30 a five man squad from the company was charging a machine gun nest was mowed down just 15 feet from their objective.  Doss crawled forward under that same fire four different times to drag survivors to safety.  It was just the first of a string of extraordinary acts of bravery that stretched over the next several days.

Most Medal of Honor winners are cited for a single action.  Doss’s citation was epic citing six actions over almost a month.  Let it speak for itself.
… He was a company aid man when the 1st Battalion assaulted a jagged escarpment 400 feet (120 m) high. As our troops gained the summit, a heavy concentration of artillery, mortar and machinegun fire crashed into them, inflicting approximately 75 casualties and driving the others back. Pfc. Doss refused to seek cover and remained in the fire-swept area with the many stricken, carrying all 75 casualties one-by-one to the edge of the escarpment and there lowering them on a rope-supported litter down the face of a cliff to friendly hands. On May 2, he exposed himself to heavy rifle and mortar fire in rescuing a wounded man 200 yards (180 m) forward of the lines on the same escarpment; and 2 days later he treated 4 men who had been cut down while assaulting a strongly defended cave, advancing through a shower of grenades to within 8 yards (7.3 m) of enemy forces in a cave's mouth, where he dressed his comrades' wounds before making 4 separate trips under fire to evacuate them to safety. On May 5, he unhesitatingly braved enemy shelling and small arms fire to assist an artillery officer. He applied bandages, moved his patient to a spot that offered protection from small arms fire and, while artillery and mortar shells fell close by, painstakingly administered plasma. Later that day, when an American was severely wounded by fire from a cave, Pfc. Doss crawled to him where he had fallen 25 feet (7.6 m) from the enemy position, rendered aid, and carried him 100 yards (91 m) to safety while continually exposed to enemy fire. On May 21, in a night attack on high ground near Shuri, he remained in exposed territory while the rest of his company took cover, fearlessly risking the chance that he would be mistaken for an infiltrating Japanese and giving aid to the injured until he was himself seriously wounded in the legs by the explosion of a grenade. Rather than call another aid man from cover, he cared for his own injuries and waited 5 hours before litter bearers reached him and started carrying him to cover. The trio was caught in an enemy tank attack and Pfc. Doss, seeing a more critically wounded man nearby, crawled off the litter; and directed the bearers to give their first attention to the other man. Awaiting the litter bearers’ return, he was again struck, by a sniper bullet while being carried off the field by a comrade, this time suffering a compound fracture of 1 arm. With magnificent fortitude he bound a rifle stock to his shattered arm as a splint and then crawled 300 yards (270 m) over rough terrain to the aid station. Through his outstanding bravery and unflinching determination in the face of desperately dangerous conditions Pfc. Doss saved the lives of many soldiers. His name became a symbol throughout the 77th Infantry Division for outstanding gallantry far above and beyond the call of duty.
Whew! It is exhausting just to read.  Doss’s wounds were grievous, life threatening.  But he seemed most concerned with the loss of a pocket Bible his wife had given him.  After action in front of the caves subsided the whole company combed the ground until they found the Bible and returned it to the injured man as he was awaiting evacuation to a Hospital Ship.  Before he left his commanding officer informed him that he was submitting his name for the Medal of Honor.

The Medal was officially approved in November as Doss was recovering from his wounds.  Promoted to corporal, Doss received his medal personally from President Harry Truman when he was well enough to stand through the brief ceremony.

After a spell in the Philippines after the end of the war, my father returned to Montana and his wife Ruby a changed and restless man.  The first two years home were difficult.  He couldn’t sleep well and often woke up screaming.  He could not settle into his old life as a bank teller.   Instead he concocted a scheme to purchase a bunch of surplus 1903 Springfield Rifles, mount them with scopes and make them the prizes for the punch boards he peddled to saloons across the state.  It kept him moving and drinking.  He also disappeared into the mountains for long periods on fishing and hunting trips.

Slowly he got a grip on himself and opened a sporting goods store and hunting guide service in West Yellowstone that led unexpectedly to a career as a Chamber of Commerce manager.  By 1949 he and Ruby could adopt the twin boys they would raise as their own.  He became part of the so-called Greatest Generation which came home and started remaking America.

Doss’s injuries were so severe that he spent the next five years mostly convalescing in Veterans’ Hospitals.  When he finally came home to his family he could not work at a steady job.  His wife and child lived on his slim disability payments.  He lived in Georgia and later Alabama using his abundant free time as a church volunteer and youth leader.  His first wife died in 1991, and he remarried.
When interviewed from time to time he would tell his story plainly without embellishment.  But he was evidently more comfortable talking about his experiences than my Dad.

Doss died March 27, 2006 at the age of 86 at his home in Piedmont, Alabama.  He was buried in the National Cemetery at Chattanooga, Tennessee.

My father was long gone by then.  He died of brain cancer in a Missoula, Montana hospital on December 17, 1989 at the age of 76.  He was given both American Legion and Masonic funeral services.  His ashes were scattered by surviving brother Masons and hunting buddies from Hardin on “the sunny side of the mountain overlooking his favorite trout stream.

Doss was interviewed for the 2001 TV series Medal of Honor and profiled in Conscientious Objector, a 2004 documentary.  In 2012 there were reports that director Randall Wallace was developing a feature film about Doss for Walden Pictures.

My father lives on in fading photographs on the wall of my study.