Commentary on the Government Shutdown and Yikes—It’s Poetry 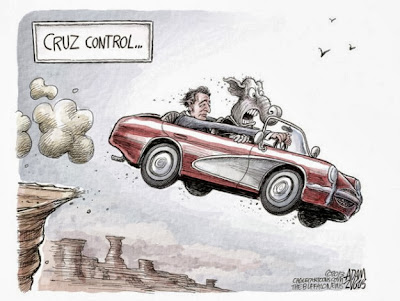 Back in the ‘50’s guys with duck tails and souped-up Chevys played two kinds of games of chicken on the dark blacktops outside of town.  The classic game had two machoed-out, testosterone fueled knights run full speed at one another until at the last minute one swerved out of the way, pee dribbling down his Levis.  Or not, in which case there would be a swell double funeral.
A rarer variant was immortalized in James Dean’s Rebel Without a Cause—a side-by-side drag race toward a cliff.  As you will recall, James applied the brakes at the last second.  The other yahoo sailed serenely over the cliff to a fiery crash and oblivion.  Last night was that kind of game.  We could almost celebrate the cleaning up of the gene pool by the Republicans’ grandiose self-immolation, except that the rest of us were tied up, bound, and gagged in the trunk.
The long awaited/dreaded government shutdown is a signal to pundits and bloggers analyze and opine with abandon.  The conduits of the interweb are clogged with it as I type.  The product ranges from right wing hair-on-fire hysterics and pants-on-fire lies, to solemn platitudes and phony even-handedness of the professional talking heads, to liberal/left commentary torn between blindly backing the President to sniping at him and unloading lots of impractical advice on him.
But here and there you can find a calm and rational analysis of what is happening, why, and various likely outcomes.  I urge you to find them.  They are all better than I could have done.
Instead I am moved to poetry.
Political poetry has the shelf life of sushi on a pushcart in Phoenix in August.  It has a long and ignoble history since the days when long satirical ballads were printed anonymously in partisan newspapers, through righteous radicalism dripping with the blood of workers and peasants, to acid penned short pieces in the columns of Puck or The New Yorker.
This is none of those, but read it fast before it evaporates from your screen.

The sun rose this morning
heedless of deadlines
of wails and curses.

But that doesn’t mean
we must sit idle
with Zen-like equanimity.

The dew on the grass
invites the first foot print.

The crystal air refreshes
our lungs.

The wind at our backs
pushes us to action.

What they have done,
is done.

What we will do
is yet unwritten.

We have but one resolve—
not to be pawns
on their chessboard
anymore.