When Hound Dog Exploded on the American Cultural Map 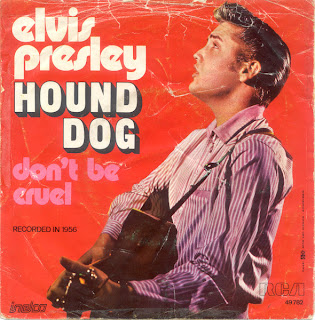 You ain’t nothin’ but a hound dog
Quit snoopin’ ‘round my door
You can wag your tail
But I ain’t gonna feed you no more.
Stoller and Leiber took over from Otis in producing the recording session for Peacock after Otis had to sit in as drummer and couldn’t run the session.  The record was released in February 1953 to positive trade reviews and hit it big in Black urban areas.  It spent fourteen weeks on the Billboard R&B charts, seven of them at number one and was the #3 R&B hit of the whole year.
Although most white Americans never heard the record, its success spawned numerous “answer songs.”  These songs kept Peacock Records attorneys working overtime on copyright infringement cases.  The most notable of those actions was against Sam Phillips who claimed writing credits for an answer song Bear Cat performed by Rufus “Hound Dog” Thomas.  It was Sun Record’s first big hit.  But when the courts found Phillips guilty, the fines and court costs nearly bankrupted the label.  To save the company he had to sell the contract of his hottest property, Presley, to RCA Victor.
Among the most unusual of several covers was a Western Swing version by Bob Wills and His Texas Playboys.
But the most influential was Philadelphia based Teen Records version by Freddie Bell and the Bellboys, a White group which had become an established Las Vegas lounge act.  Bell sanitized the lyrics for white audiences, just as the early songs of Little Richard and other Black acts had been.  All the sexual innuendo was either removed and replaced by new lyrics or obscured.  Just having the song sung by a man muddied the original core metaphor.  The new version went:

You ain’t nothin but a hound dog
Cryin' all the time.
You ain’t nothin but a hound dog
Cryin’ all the time.
Well, you ain’t never caught a rabbit
And you ain’t no friend of mine.
This sanitized version was now literally about a dog.  Unfortunately for Bell, tiny Teen Records did not have the muscle to make his recording anything more than a local Philadelphia hit.
While all of this was going on Leiber and Stoller themselves had become hot commodities.  They had established their own label, Spark Records producing hits like Smokey Joe’s Cafe for The Robins.  The label was later bought by Atlantic which left the boys in charge of their own division with the freedom to produce for other labels as well.  Now high powered song writer/producers, they were soon churning out hit after hit in a legendary career that itself helped reshape.
In 1956 Presley was on the hunt for new material for RCA.  As an ardent blues fan he knew and admired Big Mama Thornton’s original and of course was very familiar with Rufus Thomas’s ill-fated Sun label answer.  Friends also reported that he liked to whistle and sing along with the Bob Wills version.  So the song was on Presley mind when he and his backup band caught Bell’s act at the Silver Queen Bar and Cocktail Lounge in the Sands Casino.  Bell was doing it as a comedy change-up number, a virtual burlesque including gyrating choreography all to a three beat so called “Latin riff.”  Presley asked Bell for permission to record it, to which Bell eagerly agreed, hoping that it would hype sales of a planned LP that would include his own version.
Presley tried it out in live performances through the spring of ’56.  Like Bell, he used it as comic relief.  Audience reactions were strong.  But when he closed one of his biggest dates yet in front of 7000 home town Memphis fans at the Cotton Festival the response was overwhelming.  It became his closing number for many years.
He next tried it out on his first big national TV appearance on the Milton Berle Show on June 2.  On Berle’s advice he performed for the first time without his guitar and his hip swinging gyrations became a national sensation and scandal.  Appearing on the Steve Allen Show a few weeks later, Presley good naturedly let Allen turn the song into a parody of a parody crooning to a basset hound while in white tie and tails.
On July 2, 1956, the morning following the Allen show, Presley took it to RCA’s New York recording studios and it was released a scant two weeks later with Don’t Be Cruel on the B side. It was an immediate cross genre hit.  It scored #1 on both the Country and Western and R&B Billboard charts and rose to #3 on the pop charts that year.  Radio stations around the country were blasting the tune and juke boxes were collecting nickels as never before.  The whole country was listening to Pressley and his Hound Dog.
Stoller was using some of his new wealth on a European vacation while all of this was going on and was unaware of it.  He returned to the States on the ill-fated liner Andrea Doria which had sunk after collision with another liner off of Nantucket.  Stoller was among the passengers rescued and Leiber was at the New York dock to greet him on July 26 with some startling news.
In their mutual memoirs, Hound Dog: The Leiber and Stoller Autobiography they would recall that Leiber said:  “We got a smash hit on Hound Dog,” Stoller said, “Big Mama’s record?” And Leiber replied: “No. Some white guy named Elvis Presley.”  Stoller went on to comment, “I heard the record and I was disappointed. It just sounded terribly nervous, too fast, too white. But you know, after it sold seven or eight million records it started to sound better.”
Indeed.
Posted by Patrick Murfin at 7:28 AM