Gutenberg—The Man Who Changed Everything 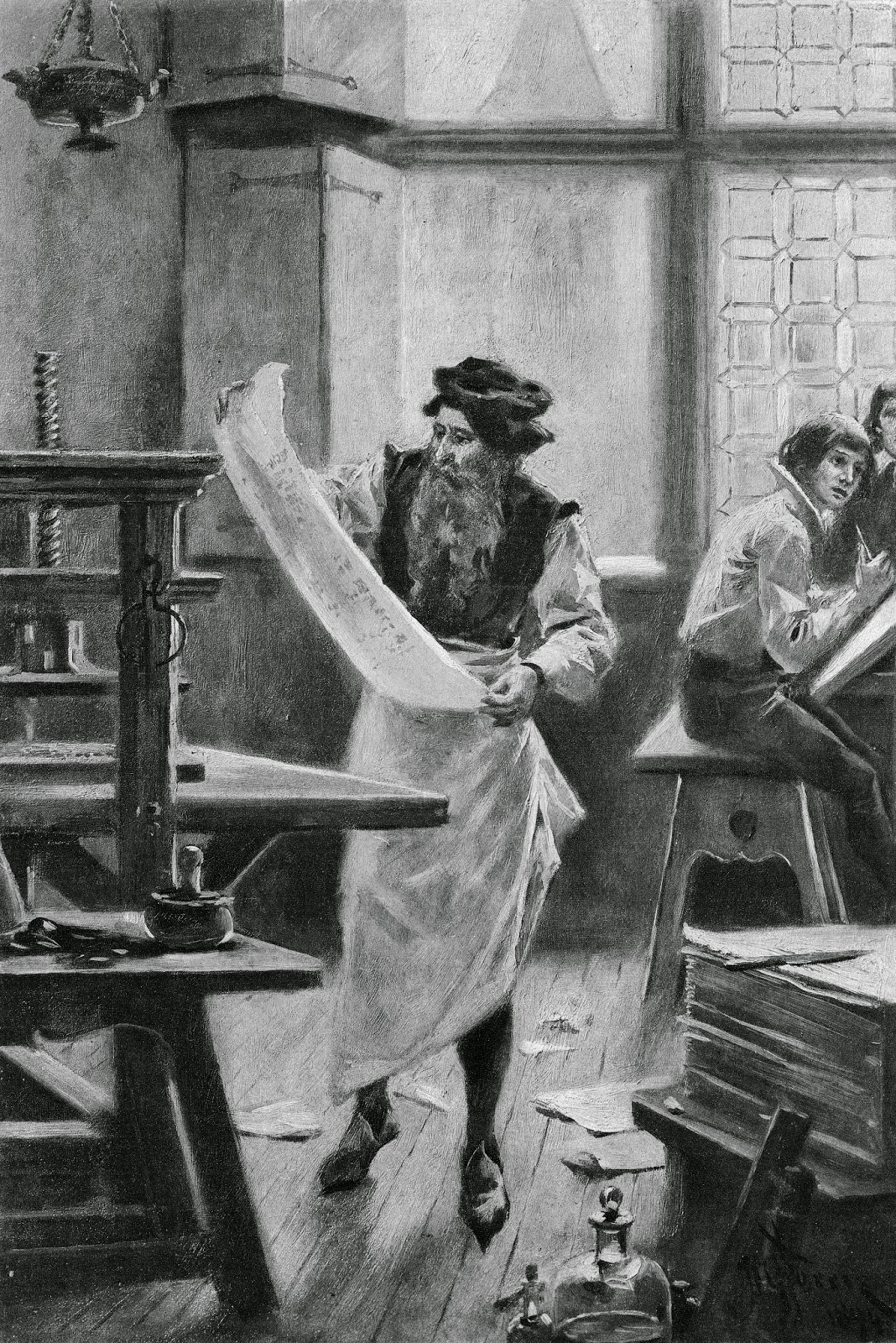 It is hard to imagine the startling changes the Johannes Gutenberg unleashed on the world when on February 23, 1454 he reportedly pulled the first sheets of his new edition of the Bible off of his printing press in Mainz, Germany.  It would take two years to finish running off—it that term can be applied to the laborious process—about 160 copies of the 1,272 page book with 4 pages per folio-sheet, 318 sheets of paper, and 636 impressions for each copy.  About three quarters of the volumes were printed on high quality imported Italian paper and the balance on the calf skin vellum still used by scribes making books by hand.

The German craftsman did not invent either printing or moveable type.  The Chinese had been producing documents by printing for centuries and had employed hand cut moveable type at least two hundred years.  Because Chinese is represented in pictographs representing whole words, each piece of type represented a word rather than a letter in a word.  While there are thousands of pictographs, only a few hundred were commonly used.  Each image had to be hand carved from wood, but only a few of any would be required on a single page.

Europeans had long been familiar with the process, but ran up against the problem that scores of the same letter had be used on each page and that it took a master craftsman a day or more to carve each individual  letter making the production of books unaffordable.

Guttenberg solved this and two other critical problems.  First he devised a way to cast multiple copies of each letter from molds made from original carvings.

Second, he essentially invented the printing press which allowed uniform impressions to be made from locked and set blocks of type.  Previously images were struck by patting the paper against the type by hand, striking it with mallets, or drawing a wooden blade across the back of the paper.  The new method not only improved the uniform quality of images, it was faster on each sheet.

Finally, Guttenberg experimented until he found an oil based ink blackened with carbon that also contained high concentrations of metals including lead and copper.  This thick mixture adhered to type, spread evenly under pressure, and dried satisfactorily leaving a sharp black image.  Previous experiments with printing had found that the thin water based ink used by scribes unsuitable.

Guttenberg had been experimenting with these elements for at least five years when he began production of the book to perfect the process.  He had produced single page broadsides, short double or triple folio works, and short prayer books—pamphlets really—before undertaking the massive Bible project.

All of his hard work paid off.  The book sold out almost immediately.  Copies went to universities, monasteries, libraries, and public archives across Europe.  The cost—60 Florins for an edition printed on paper and much more for a vellum edition in special hand-tooled bindings—was far beyond most individual purses.  In fact only one is known to have been purchased and kept a single person, although very wealthy individuals bought copies as pious gifts for institutions.  Still, this was much less than the cost of a hand inscribed and illuminated volume from a monastery scribe.  And the quality was excellent.  The best velum editions were even decorated with hand color illumination as well.   Guttenberg’s success spawned imitators and competitors.  Within decades a small printing industry sprang up, first centered in Germany then spreading across the continent.  With the supply of books suddenly increasing, literacy took an upswing as well.

With literacy moving beyond a small circle of clerics, scribes, court functionaries, clerks and physicians to the new growing class of Burgers—the merchants, master craftsmen, and guild members who were gaining influence in the cities of plague depopulated Europe—big social changes were in the offing.

The first were religious.  Bibles fell for the first time into the hands of laymen who could read and interpret it on their own.  What many discovered was at variance with what the Church had been teaching.  Result—a little something called the Reformation.  Within a hundred years men and women were being burned at the stake for books they wrote or read.

And of the making of books, there seemed no end.  Soon topics other than religion were being covered.  The new printing presses of Europe eagerly disseminated the news of voyages of discovery around Africa to the Orient and across the Atlantic to a new world.  Works on philosophy re-introduced the ideas of Aristotle and Plato then expanded on them.  Observation and inquiry into the natural world increased.  The very heavens opened up.  The songs and poems of bards and minstrels were finding their way to printed pages and popular literature in national languages was springing up.  Result—the Renaissance.

Within two hundred years literacy had spread to the level of journeymen mechanics, petty shop keepers, professional soldiers, mariners, and was virtually universal among the gentle classes.  Result—the Enlightenment and political and social turmoil.

If this seems like a long time to us who have seen revolutions in communications come and go like revolving doors, it was but a trice in the long history of humanity on the globe.

To paraphrase the father of a latter communications breakthrough, “What Guttenberg hath wrought.”