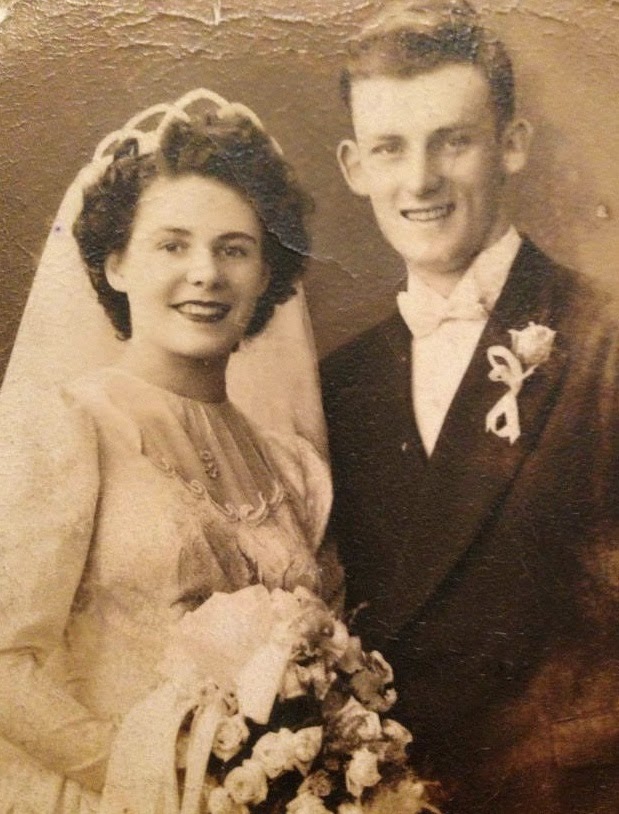 On Tuesday we lost the last direct connection our family had to the World War II generation with the death of my wife Kathy’s Uncle Alphonse Wilczynski after a lingering illness.  He was 87 years old and much beloved.
Al—nobody called him Alphonse—grew up in Chicago’s large, vibrant Polish community.  He entered the Army as a slender, freckled face, redheaded teenager and saw combat as an infantryman in battles across Europe.  Like most veterans, he never talked much about his experiences.
At war’s end he returned to Chicago and went about the business of building a life.  He and a buddy, fellow veteran Art Brady, both played accordion and spent weekends and evening performing with Polka bands.  They were good enough to be regularly featured on the radio.  He joined the local VFW post where he long remained active.
In 1947 Al married the very pretty and lively Benita Zgoski.  Art Brady married Bea’s sister Joan better known as Lulu, my wife’s parents.
Al settled down to work and after completing his apprenticeship became a master upholsterer, a trade in which he took great pride worked at for more than 40 years.  When I first met him I remember being impressed by the strength of his forearms and hands, exercised by cutting, stretching, and tacking fabric.  And handling heavy furniture was a work out.  But he never complained.
His life was centered on Bea and their three sons, Paul, Gary, and Wayne.  Bea was exuberant and social with a wide circle of friends.  Al was as quite as Bea was talkative.  He was content to be her chauffer—she never learned to drive—and companion/escort on all of her adventures and shopping trips.  Both were deeply religious and very active in their Parish, St. Francis Xavier on North Nelson Street.
They bought a house just south of Belmont and east of Sheffield.  It wasn’t much to look at—just a plain frame two flat sided with gray asphalt shingles set on a very narrow lot.  They lived on one floor and rented out the other.  Inside Bea decorated and hosted parties for the children and a famous New Year’s Day open house.
As they grew older, Paul and Wayne moved far away and started families.  Gary married an Irish girl named Kathy and stayed in the area, but they had no children.  With their own grandchildren far away and only seen on trips or visits, Bea and Al lavished attention on her sister Lulu’s brood of children and all of their many children.  They were godparents multiple times over to generations of them.
As Lulu’s grown children set up households in distant Round Lake and Crystal Lake, Al dutifully drove Bea all the way out to attend each and every birthday, first communion, confirmation, graduation, or marriage, all of the holidays and summer barbeques.  Al never complained and enjoyed sitting with the husbands and older sons sipping a beer or two and catching a Cubs or Bears game if possible.
After big family dinners when the table were finally cleared and the cards were broken out for the traditional game of 31—a simple three card draw elimination game for nickels—Al was famous for his fast knock on the first round no matter how low his hand was.  In the early rounds with a dozen or more people still at the table, he knew he could beat somebody.  Old Rapid Knuckles we teased and he took it in good sport. 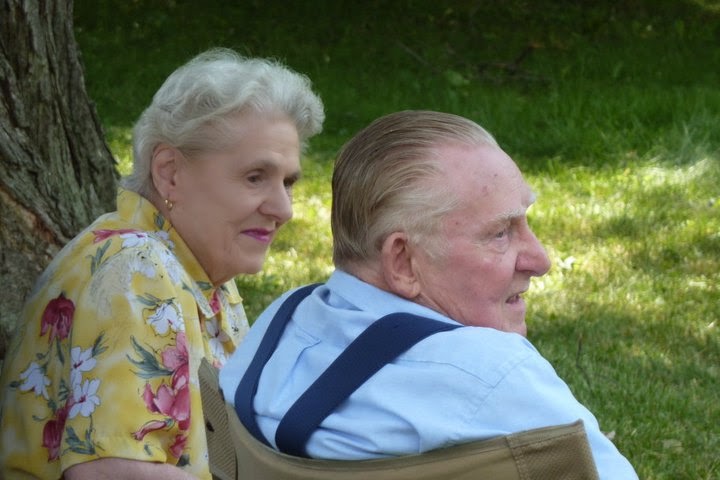 A few years ago Al and Benita’s Chicago home burned.  After determining that it could not be rebuilt, they reluctantly decided to move to Elgin, near Gary and Kathy.  The got a nice, comfortable townhome.  They were comfortable, but they were far from all of their old friends and especially from Parish life.  It was hard for both of them.


After Al finally retired, there was more time for traveling to visit their far flung children and grandchildren on excursions with my wife’s older sister Cindy and her husband Jim that included shopping and casino visits.  Al wasn’t much on either, but he was always obliging of Bea.
Inevitably, they grew older and frailer.  Bea suffered a series of devastating strokes which left her unable to communicate or move most of her body.  She was in and out of hospitals and nursing homes, and then brought home for a while, but in need of almost constant nursing care.  Al himself was too frail to help much.  Gary’s wife Kathy stepped up with care and attention above and beyond the call of duty.
Bea died last August and the whole gang, plus all of her old friends gathered for an emotional funeral at Resurrection Church, the new consolidated parish that occupies her old St. Francis Xavier church building.  Al was stoic.
And then his own long decline accelerated.  His once sharp mind wandered a bit.  He would forget how old he was or how long Bea had been gone.  He wouldn’t recognize some visitors.  Already unsteady on his feet, he fell more often.  He didn’t eat well and lost a lot of weight.  He also entered a round of hospital stays, nursing home periods, and eventually, although he resisted it to the end, placement in a continuing care home.  Kathy Wilczynski watched after him and did all she could do.
My wife Kathy visited as often as she could, often bring a favorite meal—soup, or chili, or pot pie.  She would watch a game with him or play along with a favorite show, Wheel of Fortune.
Al finally entered the hospital for the last time, just tired of living.  He lingered for a few days.  When he drew his last breath Kathy W. was there, as she had been all along, holding his hand.
It was an  unspectacular life.  Quite ordinary in many ways.  But one that touched and warmed many others.
Sunday there will be a wake and viewing in Chicago at the Lawrence Funeral Home, 4800 North Austin Avenue from 2-8 pm.  A funeral mass will be said at Resurrection Church, 2840 Nelson Street (at the corner with Francisco) at 11 am on Monday.  There will be a military ceremony at Saint Adalbert Catholic Cemetery, 6800 North Milwaukee Avenue before he is laid to rest beside Bea.  Family and friends will gather afterwards across the street for lunch at the White Eagle Restaurant.
It will be hard to say good-bye.