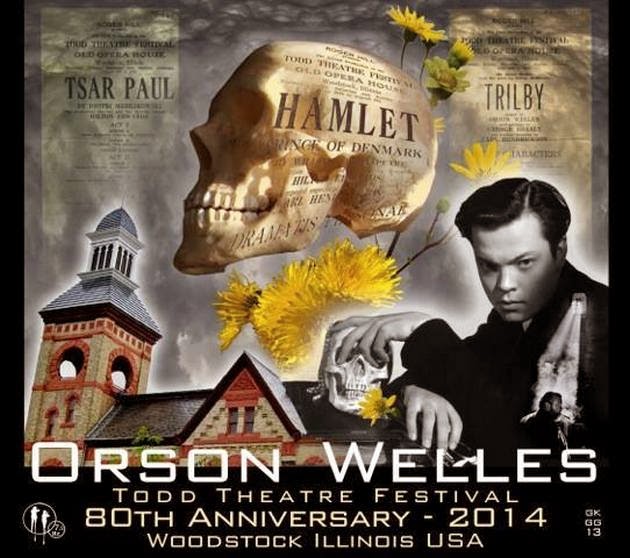 Back in 2011 I blogged about the connections of a young Orson Wells, the Todd School for Boys, and the Woodstock Opera House.  Shortly afterwards I was contacted by my friend Kathleen Spaltro with an astonishing and audacious proposal.  The 80th anniversary of the Todd Theater Festival organized by young Wells on the stage of what is now known as the Woodstock Opera House is in three years she said.  And the next year would be the 100th anniversary of the boy wonder’s birth.  Why not, she said, organize world class celebrations of Woodstock’s most famous adopted son that would bring together Wells scholars and fans from around the world.
On the strength of that one blog post—a version of which is copied below—Kathleen invited me to serve on the founding board of Woodstock Celebrates, the organization that would undertake making that vision a reality.  I really did not have much time between two jobs at the time and major volunteer commitments to the McHenry County Democratic Party and to social justice work with my church, the Unitarian Universalist Congregation that was still located in town.  I became one of those letterhead Board members whose main function is to lend some support and credibility by a person at least moderately well known in the community.  Because their board meetings were on weekend afternoons when I was sleeping to get ready for an overnight shift at the gas station, I never attended a meeting and only contributed a few suggestions by e-mail.  Eventually I was replaced by someone who could do more heavy lifting.  But I never lost interest or faith in the project.
And now, this very weekend, it is coming to fruition.  And more spectacularly than I could have ever imagined.
Actually, things have been under way for a while with a special pub crawl where folks can get their tickets punched at 13 Woodstock bars and restaurants, each one featuring a distinctive Prohibition or Depression era popular cocktail.  People have through April 17 to complete the crawl and be eligible for a prize basket provided by local businesses.
Here is a schedule of other events:
Friday, May 16th, at Stage Left Cafe
7-7:45 pm: Roger Hill’s grandson, Todd Tarbox, opens the festival. Tarbox is the author of Orson Welles and Roger Hill: A Friendship in Three Acts
7:45-8:45 pm: A panel of Welles experts responds to Todd Tarbox and introduces their topics for the Saturday event. The panel includes:
Jonathon Rosenbaum, former Chicago Reader critic, and author of Discovering Orson Welles
Joseph McBride, author of several Welles books including Whatever Happened To Orson Welles?
Michael Dawson, producer of the 1992 Othello restoration
Josh Karp, author of a new book on The Other Side of the Wind
Jeff Wilson, Welles scholar and founder of the Wellesnet website
Robert K. Elder, author of The Film That Changed My Life
9 – 10 pm: Jazz vocalist Petra Van Nuis and guitarist Andy Brown perform music of the ‘20’s and ‘30’s
Saturday, May 17th, at the Woodstock Opera House
9:30 am - Noon: A morning panel speaks about Orson Welles’s early life and career. Robert K. Elder introduces the speakers and moderates the discussion with the other speakers and the audience. The panel includes Jonathon Rosenbaum, Joseph McBride, and Michael Dawson.
2:30-5 pm: An afternoon panel speaks about Orson Welles’s early life and career. Robert K. Elder introduces the speakers and moderates the discussion with the other speakers and the audience. The panel includes Josh Karp and Jeff Wilson.
8 – 10 pm: RG (RadioGirl) Productions performs Welles’s radio script for the War of the Worlds and other Mercury Theater productions.
Concurrent Events
Speaker book signings at Read Between the Lines, a bookstore next door to the Opera House.
An Orson Welles Film Festival at the Woodstock Theatre, including showings of Citizen Kane, The Lady From Shanghai, Macbeth, and The Stranger.
An archival and photographic exhibit about life at The Todd School, held at the Woodstock Public Library.
Exhibit of Black & White photography at the Old Courthouse (located on Woodstock Square)
Historic Walking Tours of Woodstock offered by the Historic Preservation Commission

Admission Info
Admission to the Friday night event — speakers and musicians — at Stage Left Café is by donation at the door; $15 is suggested. Each individual session on Saturday [morning panel discussion, afternoon panel discussion, and evening of live radio theatre] will be $15 for adults [21 years and older] and $10 for students. Adult all-Saturday passes will be $40, and student all-Saturday passes will be $25. Saturday tickets and passes will be sold through the Woodstock Opera House, where the Saturday events occur.

And now for my original blog post, which explains much of the background.

Woodstock, Illinois is a county seat town built around a charming Square about 50 miles northwest of Chicago.  That is in the orbit of the great metropolis, but far enough away not to be just another suburb.  Like a lot of places, maybe your home town, it has a unique history.  Today, I’d like to tell you the intertwining tales of two historic buildings.

The Todd School for Boys had been founded by a Methodist minister in 1848 as a seminary for the sons of the local gentry dissatisfied with the instruction available at local one-room school houses.  By the dawn of the 20th Century, it was a thriving academy with a liberal and artistic bent serving the sons of the wealthy from around the nation.

In 1919-20 Grace Hall was built at the center of the campus as a combination dormitory and office building.  The 2 ½ story red brick structure was built in the Prairie Style promulgated by Frank Lloyd Wright with sweeping horizontal lines and broad eaves.

The school closed in 1954.  Grace Hall stood until 2010, the sole remaining building of the old campus, surrounded by the buildings of a retirement home.

The most famous resident of Grace Hall was Orson Wells, who attended Todd School from 1926 to 1931.  It was there that the flamboyant young genius first performed in elaborate productions that ranged from Shakespeare to original musical reviews. It was there that he wrote his first scripts, directed his first plays, and even shot his first film — His second would be Citizen Kane.

Wells, who had a turbulent, unconventional childhood, considered Todd School and Woodstock to be his home.  After graduation he often returned to town to visit his mentor, Headmaster Roger Hill.  He drew on his experiences at the school and in staging productions at the old City Hall auditorium in his later work, notably the 1946 film The Stranger.

Which brings us to our second historic building.  The cream and red stone building with its Italianate bell tower dominates Woodstock Square.  It was built in 1890 as a combination City Hall, police station and fire house it included a small second floor theater.  In its early years the theater hosted touring theatrical companies, mostly featuring popular melodramas and comedy staples like Peck’s Bad Boy.  An opera or two and some operettas were also performed.

City Hall eventually was relocated to the old high school building, the police department moved out of the basement and the fire department built a new station a block away.  But the theater remained in use.  After World War II enterprising graduates of Chicago’s Goodman School of Drama established the Woodstock Players, a repertory company which staged ambitious and sophisticated productions on the stage through the early 1950’s.  Among the performers who cut their theatrical teeth there were Shelly Berman, Tom Bossley, Paul Newman, Geraldine Page, and Lois Nettleton.

But the old building was deteriorating.  Local residents made a heroic effort to raise funds and refurbished it in 1977.  Re-christened as the Woodstock Opera House, the building is now the lively cultural center of the community.  It is home to two resident community theater companies—including one of the oldest continuously operating companies in the nation—and a summer youth theater.  It also houses a week-long Mozart Festival every August, and hosts a variety of special concerts, lectures, and other programs.  Together the Opera House and the Square are gems that draw visitors and tourists from around the country.

Last year the stage at the Opera House was dedicated to Wells and a brass plaque installed.  It was part of the preliminary run up to the festival this week.