More Than Ever, May Day Matters in the Wake of Baltimore

Note—In my final National Poetry Month post yesterday which featured May Day Poems, I promised my annual May Day history today.  Well, we interrupt out regularly scheduled program for this important update….
In the spring of 2015 I have news for folks that expected May Day this year to be another nostalgia party for crusty old unionists and die hard socialists, anarchists, and lefties who time has passed by.  Oh sure, things often seemed like that in the past.  City administrations like that in Chicago had become so unthreatened by the quaint observances, that they quasi-adopted them as historic curiosities.  Hell, the city even allowed  and helped pay for a monument at the Haymarket, ground zero of the events that led to the creation of May Day as International Workers’ Day.
That began to change a few years ago when largely Latino immigration activists began staging mass marches on May Day to demand reform, an end to mass deportations, family reunification, and economic justice for undocumented workers.  They were welcomed and joined by at least a good chunk of the labor movement, some from unions that had not marched on May Day for decades.  Then came the mass protests in Wisconsin and other states where Republican administrations launched all-out war on public employees, education and social services, voting rights, and unionism.  The Occupy Movement spread like an unexpected prairie fire and May Day marches took on new relevance, militancy, and street savvy.  Add to the mix things like the Moral Monday movement which revitalized and refocused the Civil Rights Movement around voting rights and other justice issues,  and the burgeoning movements for a livable minimum wage and the rights of workers  in low wage industries including fast food, big box retailing, and warehousing.  Faces in the marches have grown younger, far more diverse, and far less tolerant of paternalism, platitudes, and politics as usual.
And this year there is Baltimore.  And more than Baltimore, the whole outrageous string of police murders and other violence on Black folks—especially young men and the growing outrage over the new slavery of mass incarceration of Blacks.  A new, young generation has risen to lead a national Black Lives Movement that has taken to the streets around the country in mass numbers and been unafraid to employ creative disruption and mass civil disobedience.  And, when push comes to shove in the streets, have fought back only be labeled as rioters and thugs.
If May Day is to mean anything, it now must be inclusive of all working, poor, marginalized, and exploited people, not just the sliver of those who belong to unions or the left ideologues who too often want to appoint themselves leaders and use the unrest just to advance their sectarian goals.  And leadership in a new May Day movement must be in the hands of those most oppressed.
Indeed, this is happening on the ground.  Unionist and leftists have come out in Baltimore and around the country in support of an organic movement.  In return Black Lives Matters groups have endorsed and plan to be a big part of May Day Demonstration around the country.  In Oakland, California, site of some of the largest of the Occupy Movement marches, pitched battles with police, and a militant dock workers’ union whose rank and file have repeatedly shut down the port, those workers will do it again, striking the port to demand an end to police violence in the Black community.  Huge street demonstrations are expected there.  Other big action uniting the traditional labor left and the new movements are slated for other cities.

Nothing terrifies the oligarchy more than this popular confluence.  We know from bitter experience that when the Occupy Movement showed that not only would it not fade away, but that solidarity across racial divisions was growing the Federal Government and the Justice Department coordinated the police attacks and crackdowns that destroyed Occupy encampments around the country in the spring and summer of 2012.  Now signs of growing panic in ruling circles look like that same coordination will be used against May Day observances and continued solidarity actions over police violence.
An indication of a shift in tactics to straight out repression came in New York City earlier this week when a large crowd of peaceful demonstrators, who had grown used to a de facto city policy of allowing marches to burn themselves out on the streets in the wake of police killings there,  found themselves broken up into small sections, kettled, and subject to rough arrests.  As in the attacks on the Occupy movement, on Back Lives Matter marches in several cities, and in Baltimore, media members and others trying to document police behavior seem to have been singled out for arrest.  In Baltimore all pretense of legality has been abandoned with hundreds of those arrested now held for days without charges and crammed into tiny holding cells denied access to phones or attorneys.
Yesterday organizers of Chicago May Day events got a chilling taste of how far the City administration is willing to go to squelch the solidarity between the traditional left and the Black protest movements.  There a broad based May Day Radical Coalition including the Chicago General Membership Brand of the Industrial Workers of the World (IWW), Feminist Uprising Resisting Inequality and Exploitation (FURIE),Black Lives Matter Chicago, Pilsen Food Not Bombs, Chicago Torture Justice Memorials, Moratorium on Deportations, Gay Liberation Network (GLN), Chicago Socialist Party, and the American Party of Labor have planned a major March,  Rally, and Noise Demo that will set off at 2:30 pm from Union Park and March to Cook County Jail.  This has the city strangely unnerved.  Organizers have been repeatedly visited by police with dire warnings.  Then yesterday the May Day Event page on Facebook as well as links to it personal pages all dramatically vanished, apparently because they had been reported as promoting violence.  Although the page and links were restored after a few hours, the interference, presumably on charges originating with the Police, was a deeply disturbing sign of interference with free speech and a sample of the potential choke hold authorities can exert on the social media. 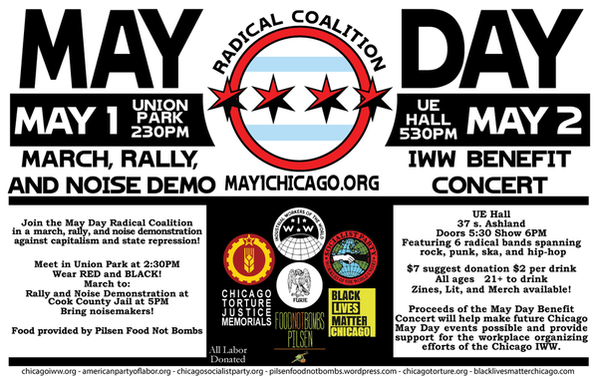 But harassment did not end there.  The IWW also planned a follow-up Benefit Concert on May 2 at the United Electrial Workers (UE) hall located near Union Park on South Ashland west of the Loop.  The local Wobblies too care not to feature the folk and protest music often associated with them, but Ska, techno-punk, and rap acts with broad appeal for youth in Black and Latino as well White communities.  The Benefit was getting a lot of chatter on the street and generating excitement.  Too much excitement.  And way too threatening in bringing together minorities that authorities try to keep separate and hostile to each other.
On Tuesday UE official were warned by Chicago Police that the IWW and associated groups in the May Day Radical Coalition are organizations that “cause civil unrest.” Heavy pressure to cancel the event was put on the UE, a union with its own radical roots.  They defended the IWW as a legitimate labor union and said they had often rented their facilities to the Wobblies for a variety of events.  The Police left but returned with three separate cease and desist orders obtained from compliant judges and not-so-veiled threats that the aging union hall could become the subject of very intense building and fire inspections that might effectively close it down or cost hundreds of thousands of dollars to remediate.  The UE was left with no choice but to void its rental agreement with the IWW.  The Wobblies were only informed at 4 pm on Thursday leaving them scrambling to find a new venue.  As of this writing, nothing has been located, the IWW promises to keep trying to make arrangements.
I can’t recall this kind of police pressure to prevent a meeting or event on private property since the regime of Richard J. Daley and the heyday of the old Chicago Red Squad  in the ‘60’s.
The good news is that if authorities are this desperate, your movement is shaking things up.  You can help by joining the May Day march in Chicago if you are able, or local actions where you live.  You will not regret it.

Posted by Patrick Murfin at 4:19 AM