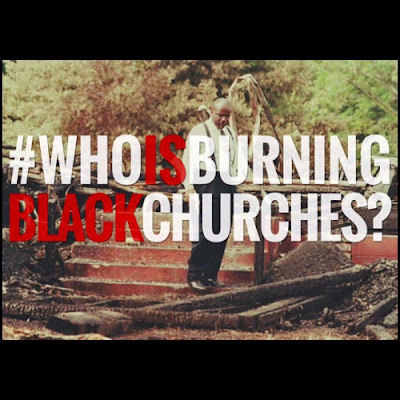 It seemed that we had heard that song before.  In the days following the Charleston Church murders and the wave of public grief and support for the Mother Emanuel AME community people began to notice what seemed to be a rash of fires that destroyed or damaged Black churches across the South.  The fires escaped more than local media attention but after the fourth or fifth one memes began to pop up on Facebook, Twitter, and other social media and soon spread like, you should excuse the expression, wildfire.  They soon took on a unifying identity—#WhoIsBurningBlackChurches—just as Black Lives Matter did after the string of police killings of unarmed Blacks began last year.


As I write this, 7—8 if you count an Ohio church—fires have been linked to what seems to many to be a suspicious and familiar pattern of racist terrorism against the most visible and powerful Black institutions in the South.  But at least two of the fires seem to have been accidental—faulty wiring in one and a lightning strike in another.  Arson is suspected in four cases, including at the Mount Zion African Methodist Episcopal Church, near Greeleyville, South Carolina which was burned by the Ku Klux Klan in the wave of church burnings in 1995-’96, and another fire is categorized as suspicious.  Of these only two are actively being investigated by local authorities as possible hate crimes.

The Federal Justice Department has announced it is launching its own probe into the fires to see if there is a pattern of civil rights abuses and/or an organized conspiracy behind the fires.  That sounds familiar.
Over an 18 months period in 1995 and 1996 wave of over a hundred cases of suspected arson attacks on churches, synagogues, and mosques nationwide grabbed headlines.  Of these 70% were Black churches in the South.  Conservatives blamed the fires on an attack on religion, especially evangelical Christianity.  Black church leaders and civil rights organizations, however, were convinced that the Black church fires were the work of racists intent on punishing and intimidating the Black community whether committed by lone wolf individual or by the Klan or other emerging hate groups.
The end of a Federal investigation was inconclusive, and dissatisfying to many.  In fact, the investigation concluded that there was not a significant increase in the incidence of either church fires or arson over the period, just an awareness of them brought about by media coverage suggesting a pattern.  It did note the unusual concentration of fires in the Southern backed churches but could find no pattern of conspiracy.
The trouble is with such investigations that then, and now, church fires are common—more common than fires to other kinds of non-residential and non-abandoned buildings.  Just ask the insurance companies that cover them.  The reasons are myriad—many church buildings are old and maintenance is often deferred.  On one hand they often sit vacant for much of the week and on the other hand are often used with little supervision by church groups, volunteers, and community organizations and activities.  Coffee machine hot plates and space heaters are often left on unattended, candles are left burning, electrical systems overloaded, and kitchen fires are common.  Churches are regularly targets of vandalism of all sorts as well as of burglaries.
Even when arson can be identified, motive is not always clear.  Pastors have burnt their own churches for the insurance; there are disgruntled current or former parishioners; those with grudges against church personal or members; extortionists; those angered by doctrinal differentness or political stances—think marriage equality, abortion, gun control, or anti-war activity;  common vandals-for-the-thrill-of-it; the mentally ill; and, yes, those who do hate religion.  Often even when suspects are arrested motives may be murky or mixed.
In the case of arson at Black churches, suspects may be especially hard to identify since a disproportionate number have been small churches in isolated rural locations where few witnesses or of the ubiquitous urban video surveillance cameras are around.
So it is not surprising that the 1996 Federal report was inconclusive.  And it would not be surprising if one conducted this year did not turn out the same, although advances in forensic science since then and the bread-crumb trail left by many racists on hate group web sites and chat room offer some hope.
Still, back then some of the attacks were identified as racially motivated.  A few arrests were made.  Some, like the Mount Zion AME fire, were even tied to Klan and other hate groups.  General racial tensions led to well founded suspicion that many of the unsolved fires were also racially motivated.  President Bill Clinton clearly thought so in his public comments, including the statement he made when he attended the dedication of the re-built Mount Zion Church.
In Congress Republicans who saw an attack on religion joined with liberal Democrats to enact legislation making church arson a Federal crime under certain circumstances and empowering the Justice Department to more quickly intervene in investigation of attacks.
But perhaps the most alarming conclusion inferred by the 1996 Federal report that there was no “significant statistical increase” in church arsons during that period is that Black churches have been the subject of uninterrupted, decades-long terrorism which rises to public awareness on rarely and sporadically.
It is a discouraging thought, but not one that can be dismissed as unfounded paranoia.  In fact, it can lead to despair and a sense of helplessness.  Realizing that the easy activism of re-posting Facebook memes is not adequate to the situation and the reality that the Black church in the South feels under siege, one Unitarian Universalist called on fellow UUs drop what they are doing with their lives and stand guard at Black churches.
Unfortunately there are thousands of endangered Black churches, many as noted in remote locations.  There are far too few UUs to protect them even if our congregations emptied to offer comprehensive protection.  The best we could do is offer ourselves at a handful of churches, if we could identify the mostly likely targets.  But we probably can’t.