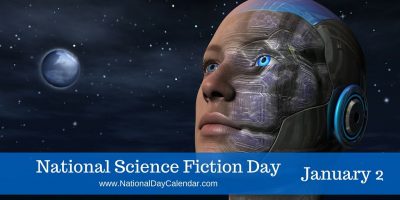 Although science fiction origins can be traced back to wild yarns by Cyrano de Bergerac—The States and Empires of the Moon—and Edgar Allen Poe—The Unparalleled Adventure of One Hans Pfall—most credit Jules Verne, Sir Arthur Canon Doyle, and H.G. Wells for launching the modern literacy genre.  But despite the high flown pedigree, modern S.F. at its heart is really the child of early 20th Century gaudy, tawdry pulp fiction and comic books.  Three or four generations later it is big business and a cultural leviathan.
Not only was the top movie of the holiday season   Rogue One: A Star Wars Story but the sudden death Carrie Fisher—Princes Leia—evoked international mourning on a level with the grief expressed for the loss of music icons last year like David Bowie—who had considerable sci-fi content in his work—and Prince.  Star Trek and its spawn remain cultural icons and George Takei—Sulu—commands social media.    Science Fiction is all over network and cable TV as well as new streaming services.  Hell, it even has its own basic cable network and the BBC’s beloved Dr. Who is back on PBS with a new Doctor.  Gamers are obsessed with plethora SF options.  My grandson Nicholas Baily who shares my study space is glued to one right now and oblivious to anything else.

And books?  Hundreds of new titles are released each year.  Somebody must still be reading them.
It should come as no surprise then that today is National Science Fiction Day. Or it may not be.  A couple of internet sources list February 2 as the occasion for celebration, but they are in the minority.  I suspect they are just sloppy and imprecise—everything you don’t want in say a Star Fleet engineering officer no matter what kind of pajama tops they wear in their Mom’s basement.
That damn lazy, do-nothing Republican Congress may not have gotten around to passing one of those official proclamations.  Understandable.  They only read Ayn Rand.  But it is widely celebrated in the Sci-fi world and among the folks who make Comic Con and Trek conventions huge deals.  And it has been recognized by such impeccable authorities as The Hallmark Channel and Scholastics, the juvenile book pusher.  And who is to argue with them?
The origins of the observation including who first thought it up, sponsored it, or even when it began.  None of a dozen or so on-line sources I consulted offered a clue.  But apparently it has been going on for a while.  I suspect that it bubbled up from fandom or someone would have trademarked the name and have a web site promoting official merchandise and gear.

What everyone does agree on is that January 2 was chosen to honor Isaac Asimov who was born on or around this date in 1920 in the midst of the chaos of the post-revolutionary Civil War in Russia.  Documentation of his birth was lost, but he celebrated today.
Asimov, of course it the god father of serious, mature science fiction.  Of course as the proud President of the American Humanist Association, he would hate to be called that.  After immigrating with his family to the United States he grew up to be a polymath and astonishingly productive writer.  He earned a PhD in biochemistry and was a long-time professor at Boston College.  He authored or edited move than 500 books and monographs—so many that he lost count.  He authored text books and popular explanations of astronomy, mathematics, history, William Shakespeare, as well as chemistry.  There were also books on philosophy, current events, and morality.  He was said to have books listed under 9 of the 10 major categories of the Dewey Decimal system.

But he is best remembered for his fiction including mysteries, fantasy, and, of course science fiction.  He began by churning out lurid space yarns for the pulp magazines for pennies a word to support his education.  He never disrespected those origins which also fostered other science fiction giants and contemporaries including Robert A. Heinlein and Arthur C. Clarke.  He even lent his name and prestige to a pulp digest of his own, Isaac Asimov’s Science Fiction Magazine (now published as Asimov’s Science Fiction) which became one of the three mainstays of the genre and helped establish the careers of many younger writers.
But Asimov had grander ambitions.  Beginning with the Foundation Trilogy published in 1951 through ’53 and the many spin-off series set in its universe he combined hard science, future history, pulp adventure, and serious philosophic conjecture in a detailed and consistent universe.  And he did it on an epic scale.

Although Asimov would be disappointed with the lack of hard science and pseudo mystical trappings, the far-flung Star Wars sagas are the direct descendant and bastard offspring of the mating of the Foundation Trilogy and Buck Rogers space opera.
Asimov, who died in 1992 at the age of 77, was said to be aware of the homage of National Science Fiction Day before he passed and appreciated the honor, which gives some idea how long the commemoration has been hanging around.