On April 26, 1937 German and Italian war planes bombed the market town of Guernica, a Basque village in northern Spain.  It was one of the first mass bombings of a civilian population center with little or no military significance in history.  The event outraged world opinion.
Within weeks Spanish expatriate painter Pablo Picasso in Paris was commissioned by the Republican Government for a display at the Exposition Internationale des Arts et Techniques dans la Vie Moderne at the 1937 World's Fair in The City of Light.  Picasso’s huge, dramatic monochromatic black, gray and white painting became an international sensation and anti-fascist icon.  It toured the world and survived the Blitz in London.


When the United Nations opened its new headquarters in New York City, a full size tapestry reproduction was hung on a wall outside the entrance to the Security Council Chambers to remind the delegates and diplomats that their mission was to make a world where atrocities like Guernica are impossible.
On February 4, 2003 United States Secretary of State Colin Powell addressed the Security Council laying out America’s case for going to war against Iraq.  A press conference followed outside the chambers.  When reporters assembled they found the famous Guernica tapestry covered by blue curtains.  Officially the United Nations claimed it was in preparation for painting and renovation.  Some reporters were told that TV news crews had complained that the stark images distracted from the speakers in front of them.
No one honestly believed either story.  The picture had been masked to avoid embarrassing Powell and the Bush Administration who were preparing to launch their announced campaign of shock and awe which would include bombing Baghdad and inevitably cause civilian casualties. 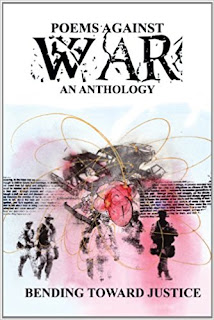 That is the moment that New York born poet Gregg Mosson captured in his piece A World Without Picasso’s Guernica which was included in the 2007 anthology Poems Against War: Bending Toward Justice.
That collection is now considered a landmark in the re-invigoration of poems of resistance and protest.
Mosson was a former reporter and commentator whose work has appeared In The Cincinnati Review, The Baltimore Sun, The Oregonian, The Baltimore Review, and The Futurist. His poetry has appeared in many small-press journals. He earned his  MA from the Johns Hopkins Writing Seminars, where he was a teaching fellow and lecturer. He has authored  two books of poetry, Season of Flowers and Dust in 2007 and Questions of Fire  in 2009.  Mosson currently is a contributing poetry editor at The Baltimore Review.

A World Without Picasso’s Guernica
February 5, 2003

At the United Nations, blue drapes sheath
a tapestry rendition of Guernica, so speakers can paint
blitzkrieging dreams, burying screams affixed and aired;
killing machines can work again.
Who expunged Guernica from the U.N.,
and then did U.N. walls tremor
down to their foundation
in the “war to end all wars”
and covetous twentieth century?
Yesterday, today, or tomorrow
bombs drop and discombobulated body parts
hurl through the air, and brown limbs
burst from horses
and spin past a still-standing bystander
dumbstruck
as infernos smoke and buildings crumble.