I love it when poets previously profiled in National Poetry Month posts here take the time to clue ye olde proprietor of voice I have not heard—probably because I was not paying attention in the right places.  In this case it was Jeff Epton, author of Wild Once and Captured who clued me in last year to Michael Warr.  Warr is not exactly a new poet—he has been writing for decades.  A Chicago writer, his first collection, We Are All the Black Boy came out back in 1990.  He has also edited important collections and had a successful career as an arts and not profit administrator.
Warr was born in Baton Rouge, Louisiana in 1955 but moved to his family to San Francisco at the age of 4.  His was a deeply committed Jehovah’s Witness family. As a child he was drawn to the arts he wanted to be a painter but he was also struck by poetry.  He recalls going room to room while still in elementary school with another boy reciting verse.
But Warr found his parent’s religion stiffening and left it and his family at the age of 16.  Yet he acknowledged how much he got from his Witness background.  “I attended a high school with the lowest reading rate in the entire state of California,” he told a 1994 interviewer. “The reason I could read was because I was a Jehovah’s Witness and that’s all we did.”  While attending that high school he and friends cut classes to cross the Bay and hang out at the University of California at Berkley where there were poetry readings, African students, and an exciting radical scene.
After graduation he made a beeline for Chicago which he saw as a Mecca of Black arts and culture—the home of Gwendolyn Brooks’ Bronzeville and successful Black publishing—the legendary Daily Defender and Ebony and Jet magazines.  He came to the right place.  Focused, driven, and committed he seemed to will himself into a career as a freelance writer and journalist despite lacking the punched ticket of a college education that everyone said he needed to succeed.
In 1978 at the age of 23 he declared himself a war correspondent and headed to Ethiopia to cover a brutal civil war and famine that most of the world was trying its damnedest to ignore.  He wrangled assignments from the BBC, The Manchester Guardian, The Economist and other publications.  He returned to Chicago in 1982 with an Ethiopian wife and spent much of the next two years touring the country and lecturing about what he had learned in Africa.  He also returned to freelance writing and edited trade publications.  Although he was making a decent income, producing telecommunications magazines.

It was during that period that he restlessly began revisiting poetry and found a congenial home at the old Guild Bookstore.  A North Lincoln Avenue fixture, crowded, rundown at the heels, and a little seedy the Guild was a radical bookstore and de facto leftist cultural center run by Richard Bray, a classic old labor leftist and the city’s favorite book nerd.  Bray used his bookstore to stage poetry nights, readings, and other occasional literary events along with a parade of radical educational and organizing meetings sponsored by otherwise warring leftist sects.
Warr began hanging around and sharing his poems at the readings. Gwendolyn Brooks would stop by as well poets famous and scruffy including my old friend and Fellow Worker Carlos Cortez.  By the end of the ‘80’s he was organizing many of the events for Bray and plotting to develop a formal Guild affiliate arts organization.  In 1989 that became the Guild Annex and Warr was it executive director.  He had stumbled into a new career as an arts administrator.  And, boy, was he good at it.  He even had a knack for that most elusive skill among artsy-fartsy types and can’t-be-bothered-with-bourgeois-money lefties—fundraising.
At first he worked as a volunteer while continuing his editing job at Telephony magazine, but was able to obtain a $100,000 grant from the John D. and Catherine T. MacArthur Foundation, enough to pay a modest salary and hire an assistant to oversee the 40 volunteers at the Annex and its busy schedule.  He could finally quit the day job. 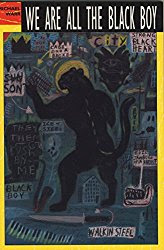 The Guild Annex opened as a physical space in an empty storefront next to the bookstore.  It was soon a bustling place full of classes, art shows, meetings, performance art, and of course those poetry readings.  It can be said that the readings there and the poetry slam movement fostered at the Green Mill were the catalyst for Chicago’s edgy poetry resurgence.  Besides running the place and expanding programs to service the arts, Warr was a performer.  He honed enough material for his first collection, We Are All The Black Boy was published in 1991 by Tia Chucha Press, an independent publisher he founded with Luis Rodriguez which became a Guild Annex project.  It was greeted with ecstatic reviews. Better yet, Warr’s childhood idol Gwendolyn Brooks wrote a cover blurb.
The strong title poem still has enormous power.  In fact, it could have been written yesterday in the brutal Chicago streets.
We Are All The Black Boy
In his mouth
An icy steel,
Notched barrel in his mouth.
Fingered by a sadist
With an omnipotent badge,
Disgusted by the boy's blackness,
'fraud of the rebelliousness
In his predator walk,
In his street corner
Disposition,
In his Niggers With An Attitude
"fuck the police" lyrics.
For this audacity
Hands behind the back
And bullet in the head.
His former breathing valuable
Only to the ghetto undertaker
With the one permanent job.
They are wise to fear
Our blood
Cannot be retracted
Without redemption.

During those years the busy Warr seemed everywhere on the Chicago poetry and arts scene.  He directed The Writers Voice, a literary arts program for writers ages 12 to 17 at the Duncan YMCA, was President of Neutral Turf Chicago Poetry Festival, which he helped found in 1988, and frequently consulted with both arts organizations and philanthropists.
Warr’s first marriage ended in divorce but he wed Patricia Zamora, a youth coordinator in Pilsen.
The Guild Annex thrived as an arts organization even after the Bookstore closed in the ’80s.
Even after eventually re-locating to his old Bay Area stomping grounds, Warr remained connected to his Guild roots and Tia Chucha Press where he and Luis Rodriguez edited Power Lines: A Decade of Poetry from Chicago’s Guild Complex 1999 and which issued his second collection, The Armageddon of Funk in 2011. 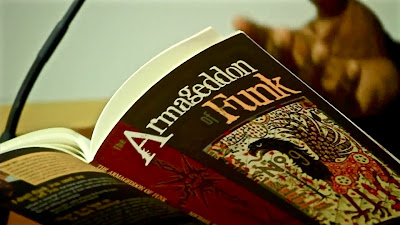 In the meantime Warr collected honors—the Gwendolyn Brooks Significant Illinois Poets Award, a National Endowment for the Arts Creative Writing Fellowship, the Ragdale Foundation US-Africa Fellowship, the 2012 Black Caucus of the American Library Association Award and 2012 PEN Josephine Miles Excellence in Literature Award.
He received a $40,000 Creative Work Fund grant to produce his multimedia project Tracing Poetic Memory in Bayview Hunters Point, a result of his long interest in mating poetry with the other creative arts including music, painting and photography, dance and other performance art.
After work in California including consulting to San Francisco Pride, the Marcus Shelby Jazz Orchestra, and the MacArthur Foundation. Warr was appointed in 2015 as Deputy Director of the Museum of the African Diaspora, a Smithsonian museum, in San Francisco. 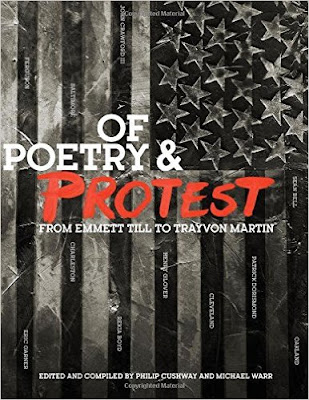 And as if all of that were not enough last year Warr co-edited with Phil Cushway the important Of Poetry and Protest: From Emmett Till to Trayvon Martin published by W. W. Norton.
Whew! I’m exhausted just reading about the guy.  Not bad for a slum kid with no credentials.
Malcolm Is ’bout More Than Wearing a Cap
The problem is not the letter X
or the myriad of emblazoned caps
even worn backward by white boys.
When Arsenio sports a rhinestone-
studded X to match his Armani suit,
I see Malcolm emasculated by fashion.
As if X symbolized a new NBA team
challenging the Pistons, Cavs, and Bulls,
their jerseys blinking “Buy American”
with every slam dunk sponsorship.
Then a sandwich is named Sandwich X,
and a four-wheeler is named Bronco X,
until the substance of X is x’ed out.
A dollar for every X on a cap
can either make a multi-millionaire,
or hopefully help pay for a revolution,
a cry we hear these days almost
as much as we see X’s — in America
where all is commodified.
Will X stand for change or
changing what America wears?
As ruling designers alienate
the Malcolm from the X. Separate
the meaning of Malcolm from the
punctuated power of X.
To Malcolm is to do. Your cap
is clean, but Malcolm is ’bout more
than wearing a cap. Your horn rims
impress, but Malcolm is ’bout vision.
Your T-shirt is down, but Malcolm
is ’bout taking over.
Your enemies will also wear the X,
sell the X, sex the X, film the X,
praise the X, record the X, raise the X,
fraternize and buy the X.
Your enemies will never Malcolm the X.
Only we can Malcolm the X.
—Michael Warr
An Open Poem To Clarence Thomas
“…it’s high-tech lynching for uppity blacks
who in any way deign to think for themselves.”
– Clarence Thomas
To be lynched is not to be castigated by peers, but castrated
by mobs for raping white women that you’ve never seen.
There are trees in Mississippi watered by the midnight murder
of black men. Trees with barbarism carved into them. Witnesses
of animalistic, primal lynching. Lynching for which there were
no hearings. Lynching that committed instead of hiding crimes.
Lynching is not a cloak to wrap oneself in for the magical return
of blackness after wiping its significance away. To be lynched
is more than a memory.
You know the pigment-controlled psyche. America’s sword
of blackness and sexuality. You sit in the seat of a Justice
empowered, unchallenged, enriched, until the break of senility.
If this is being lynched then lynch me. Lynch all of us.
Written in response to the Anita Hill/Clarence Thomas Hearings and
for the theater performance What’s This In My Coke?
—Michael Warr

Posted by Patrick Murfin at 9:18 AM