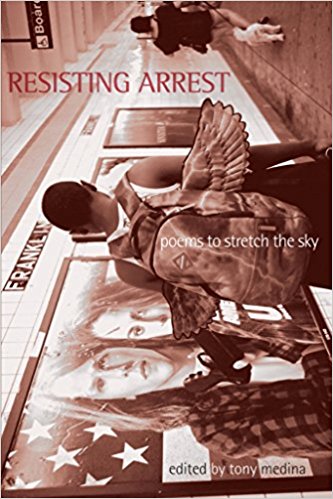 “After an overnight at the gas station, Monday was my day off from the day job.  After a four hour snooze, I got up and took the wee dog on a long walk through the elegant and promising spring.  When we got home, there it was leaning up against the wall by the front door under the mailbox.  Thank you for the wonderful books which I have just thumbed through in awe and excitement.  I have days of treasure diving the reef ahead!”  I e-mailed my poet friend Everett Hoagland whose work has showed up here twice this month upon receiving two new books of protest poetry that he sent me.
Today I sit at a desk with Resisting Arrest:  Poems to Stretch the Sky edited by Tony Medina, (Jacar Press, Durham, North Carolina) heavy in my hand.  It only weighs 12 oz. by an ancient and dilapidated postage scale but it feels like tons.  The book contains 180 pages of unremitting rage, grief, despair, and fear.  The poets are persons of color—Black, Brown, Red, and Yellow.  Their subjects are ripped from history books, newspaper headlines, and the bloody pavement before their eyes.  This is a book of witness from cover to cover and a litany of familiar names are repeated again and again in its pages—Emmet Till, MOVE, Fred Hampton and Mark Clark, Trayvon Martin, Michael Brown, Dannielle Willard, Oscar Gant, Amadou Diallo, Walter Scott, Freddie Gray, Fong Lee, Troy Davis, Tyisha Miller, Tamir Rice, Sandra Bland, add more names here  ad infinitum.
So yes, this is a heavy book.  For a White reader as heavy as the chains of Marley’s ghost.  White supremacy, racism, imperialism, willful ignorance, and denial are our chains.  Which makes the book and these poems and poets so important.  We can never lose that grinding weight without facing it, without looking ourselves in the mirror,  without acknowledging that in some way our hands were on the lynching rope and our hands pull the trigger.
Pulitzer Prize winning Rita Dove, a former Poet Laureate of the Library of Congress,  is the best known of the poets included in this sampling although several other of the best and best known working American poets are also included in the anthology.  Among her much honored work is Thomas & Beulah, On the Bus with Rosa Parks, and Sonata Mulattica.  She is Commonwealth Professor of English at the University of Virginia in Charlottesville.

Teach Us to Number Our Days

In the old neighborhood, each funeral parlor
is more elaborate than the last.
The alleys smell of cops, pistols bumping their thighs,
each chamber steeled with a slim blue bullet .

Low-rent balconies stacked to the sky.
A boy plays tic-tac-toe on a moon
crossed by TV antennae, dreams

he has swallowed a blue bean.
It takes root in his gut, sprouts
and twines upward, the vines curling
around the sockets and locking them shut.

And this sky, knotting like a dark tie?
The patroller, disinterested, holds all the beans.

August. The mums nod past, each a prickly heart on a sleeve.

Rachel Eliza Griffiths is a poet and visual artist who teaches at Sarah Lawrence College.  Her collections include Miracle Arrhythmia, The Requited Distance, Mule & Pear, and Lightning the Shadows.
Anti Elegy

The faces of our death are unresolved. The body, identified, is
confirmed by music. Rag time. Big band blood. We all look alike.
We’re prayers. The coroner's baby grand piano
in a cold drawing room.

We were not identified by our teeth [broken] or by our country [broken].
These are the  words we will not be.
Will you finish this poem or give the back of its mouth to
the gun?

The hearts, terra cotta blue, were buried beneath birch.
Drop bread from the hands that push sentences into our cages.
Murder the grooms
&  Apollos. Drag your chariots over the head of Orpheus
where a headless agony rolls like a kickball
in a Jasper road.

The business of caretakers?  Bet on that
staying platinum. The more black you buy & bury
the harder heaven shines its pennies.

Bless this nation of uncertain chambers. Bludgeon the orchestra
with blues. Plastic bags
of glory going for a name on any corner
where a pick-up game distracts the night from the black bruise
swinging in the jaundice of a streetlight.

The metaphors grieve their own offspring.  The riddles are tired
of the numbers &, bony ghettos.
The scandal of marrow as it witnesses our gaze.
The crap game of bones in repose.

Allison  Joseph is on the faculty at Southern Illinois University in Carbondale, Illinois and her work includes Soul Train, In Every Seam, and Trace Particles.
Carcass

A body doesn’t accuse you of things.
Silent. A body has a thug mouth,
huge gun. Or no gun. Or fists.
Or  a wheelchair. Cane. Crutches.
A body doesn’t fly. Limp. No muscle,
tongue. Hoodie, no handshake.
A body is drained. A body is prodded.
Mute strains of nothing. Broken.
Head twisted, shot, corroded, snapped.
A body doesn’t rise. A body stays limp.
A body doesn’t shake off pavement.
A body doesn’t collide with stars.
A body’s hours aren’t hours,
they are centuries, redlined centuries.
A body can choke you. Break you.
Wreck you beyond reckoning.


James E. Cherry is a poet, novelist, and short story writer who earned a Masters in Fine Arts from the University of Texas at El Paso.  He lives and works in Tennessee where he currently teaches at-risk youth.  His work includes Loose Change.

It could have been early morning Principe Hill
in Spain, but was afternoon just north of St. Louis,
instead. At your feet lay Shawn Bell, Oscar Grant,
Eric Gardner and to your right the faces
of my nephew, my brother,  my unborn son.

The light  must  have blindfolded your  eyes
and you couldn't see any faces, only the barrel
of a .40 caliber  gun glinting in Missouri sun.
Their uniforms are always a variation of the same.

And maybe, just maybe, your back against America,
you realized that no amount of bullets could hurt
you anymore, your only regret that no one
stepped forward to offer you a Cigarillo
or was allowed to kneel over your body to pray.

*Based on Francisco Goya’s painting, The Third of May, 1808.

Posted by Patrick Murfin at 4:42 AM