My friend Everett Hoagland is a proud and skilled Black poet who has lived and worked much of his life in mostly white environments.  He was a long time professor of English at the University of Massachusetts at Dartmouth and was for a long time the official the poet laureate of New Bedford, Massachusetts, the historic whaling and fishing port that was his adopted home town.  He has been a member of the  First Unitarian Church in New Bedford and active in wider Unitarian Universalist Association (UUA), both overwhelmingly White despite their liberalism and avowed intent to become multi-cultural and anti-racist.  Within those contexts he has been Black voice and presence.
You may recall that I included a poem by Hoagland from his latest collection The Music and Other Selected Poems last week in National Poetry Month entry on jazz and poetry.  As it often does that posting sparked a renewed connection between us via e-mail.  He wrote to say how pleased he was to be included in that post.   Not only was Langston Hughes a personal hero and role model, but when Hoagland was a senior at Hughes’s alma mater Lincoln University in Pennsylvania when the great man visited the school in 1964 and met with selected students.  Hoagland showed up with two poems in hand.  Hughes took time to make concrete suggestions and one of the poems went on to win a school creative writing award—a powerful reinforcement for a young writer.   Not only that but Jayne Cortez was another early idol to whom he dedicated a poem.

Experiences like that are an indication of how important Black culture and life have been to his work.  In 2015 that was rewarded when Hoagland received Langston Hughes Society Award joining the ranks of eminent Black poets including Sonia Sanchez, Amiri Baraka, and Gwendolyn Brooks.
As part of our e-mail exchange, I sent Everett a pdf copy of my recent little chapbook Resistance Verse.  We touched on the state of national affairs and within the UUA which has lately been embroiled in a crisis of identity and purpose that led to the sudden resignation of President Peter Morales and two other top administration figures.  It would take far too long to explain here are of the details—as well as being too inside baseball—of the crisis.  Suffice it to say that a recent hiring decision exposed White privilege—and some have charged deeply ingrained but unacknowledged White supremist assumptions—that overwhelm stated good intentions and liberal pieties.

Hoagland recently joined the Northeastern U.S. group of Black Lives Unitarian Universalists (BLUU) and supports its proposal it is bringing to the UUA General Assembly in New Orleans this summer to add a new 8th Principal which would read:
We, the member congregations of the Unitarian Universalist Association, covenant to affirm and promote: journeying toward spiritual wholeness by working to build a diverse multicultural Beloved Community by our actions that accountably dismantle racism and other oppressions in ourselves and our institutions.
Hoagland has read some his antiracism poetry, as well as poetry affirming the Seven Principles, at Unitarian Universalist congregations Plymouth and Bridgewater in Massachusetts and Palo Alto,  California, as well as many times home church in New Bedford.  He will return to New Bedford to deliver the Sunday message on April 30 as part of teach-ins and educational program being undertaken by almost 500 UU congregations.  He will report on the recent Black Lives Matter UU conference in New Orleans.

He sent me two of his latest poems—one literally only a day old grappling with this stuff.  I am happy to introduce them today.  They are wake-up calls for White folk, especially those who consider  themselves as liberal, whether they are UUs or not.
Everett suggested that he would like to come to the Chicago area to do those programs at local congregations or at public venues.  I would be thrilled to have him and also to finally meet him in person.  I can arrange something at Tree of Life UU Congregation in McHenry, Illinois.  Things are just in the earliest discussion stages and there will be plenty of lead time to make arrangements, but if your congregation would like to stage an event and/or include Hoagland in Sunday worship services or if you know of good venues for public events, please contact me at pmurfin@sbcglobal.net . 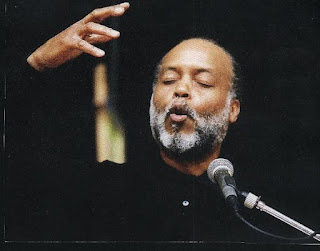 Echoes
In The President’s talk
about a wall I hear ghetto, barrio.

When he talks about “states' rights”
I am old enough to hear jim crow outright,

no rights which whites need respect.

And when he talks about upping the arms
race I hear apocalypse, see Apocalypse Now
screened on the inside back
of my glowing skull.
But here’s the thing.
When I hear white liberals wry

New-Yorker-cartoons-captions-like repartee,
chuckles about how bad, absurd, fascist things are these days,
even when that goes down,
between two glib NPR talk show hosts,
I dig it’s laughing-to-keep-from-crying blues
humor. But it is also the sound of them

knowing, relatively speaking,
they and theirs will still be okay.

Though they may have to endure
roll backs re: recreational marijuana use, infringement

of reproductive rights and such,
even with the state of things in Amerikkka right

now, they know: no uniformed cop, guard, soldier,
is going to profile, stop-&-frisk, nor shoot and kill

their kids and grandkids—just because
they are white. That is not true for the earth-brown

and night black among We The People
on whose backs, with whose lives, white privilege was,

is established, sustained, cultivated like the organic produce
bought by two food shoppers I knew who exchanged, quips,
too witty for words, about shit that was, is about as funny
as police at Standing Rock urging one another to: Hold your ground!

In the oh, so hip shoppers’ urbane laughter I heard hammering, saw
a white picket fence being rebuilt around The American Dream.

I heard a wordless subtext, another kind of us-and-them they themselves were,
are about but not aware of.

“My Fellow Americans”
After listening to an interview on NPR

And whose folk come to mind
when the word “immigrant”

is used for fleeing, refuge-seeking
humankind? What colors your thoughts

when you hear “immigrant”?
Do you see red, white and blue,

“true Americans’ folk? Folk like you?
What do you hear, what colors

your thought when you are told
slaves comes from slavs, from whom

some of you are descended. Europeans
captured, sold, bought with Roman silver,

Roman gold, millennia before your family’s
“old country” got old.

2. Millions of others’ ancestors, so profitable
they were dubbed Black Gold, many thousands gone

with hot air from recitations of The Declaration
to this hemisphere’s ... race-based slavery ...

centuries before many, maybe most
of your immigrant and potato famine refugee ancestors.

And, shamefully, a rice box “Uncle” icon
posing as a Cabinet Secretary

of a government elected by demonizing difference,
the national us-&-them otherness cult of this

Third post-Reconstruction, a Mr. Secretary descended
from some of those forced here without even clothes,

self each morning in his dresser’s mirror, while humming
“Nearer My God To Thee,” they, too, his own folk were opportunity-

in front of the mirror on his dresser. God damn!! Who was it
who said “How quickly the oppressed become the oppressor.”?