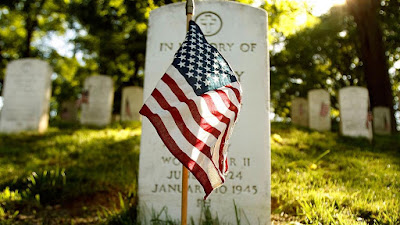 Note:  We are still in Texas but getting ready to fly home.  No time for a fresh post this morning.  So with minor edits here is a revisit a post from last year.
Memorial Day is tomorrow .  For a lot of folks it’s just the end of a long weekend and the start of summer.  And that’s ok.  You can go elsewhere to be scolded for forgetting the sacrifices of the war dead.  Just about every newspaper in the country will serve up an editorial on the subject plus letters from the VFW.  But a lot of us do hold it in our hearts for very compelling and complex reasons.
Those of us who will go to church services this morning will hear various reflections on the meaning.
My Unitarian Universalists, who tend to be, on the whole, anti-war folks, often find themselves conflicted.  How do we honor the final sacrifices of warriors without necessarily honoring or glorifying war itself? How can we express sincere love of country while acknowledging its frequent errors and injustice? Can we place our hands over our hearts and bow our heads as a distant Taps is blown and a flag is lowered to half-staff without feeling hypocritical? Can we twist a Poppy around a button without embracing the jingoism of some veterans’ organizations? It was F. Scott Fitzgerald who reminded us that “The test of a first rate intelligence is the ability to hold two opposing ideas at the same time and continue to function.” As for me, I choose to lay my symbolic wreath on the memorials to departed souls.
The question for some might be which souls.  Do some get left out?

Remembrance of the war dead is all well and good.  But, especially in modern wars, soldiers, sailors, and airmen are only a fraction of the victims.  Civilians, both those who just got in the way—collateral damage in the cold, efficient jargon of the military—and those murdered as a matter of strategy and policy dwarf the dead in uniforms.
Despite international treaties and high minded  and high flown declarations of noble intent by governments, insurgents, and other involved factions, the accepted dogma of modern warfare is that civilian deaths, the more brutal and indiscriminate the better, will “demoralize” the enemy and “sap them of the will to resist.”
This is utter hogwash.  It has never been the case.  Civilian deaths simply inflame the passions of the targeted peoples, raise their determination to both resist—and if possible wreck vengeance.  It also sets up generational resentments and enmities that threaten to rekindle conflicts again and again.
Ask the “indomitable” people of London.  Or for that matter the Germans under Allied carpet bombing or the Japanese whose wood and paper cities flashed over in fire storms even before we dropped atomic weapons on Hiroshima and Nagasaki.
Although the Axis Powers were eventually overwhelmed by superior military and industrial capacity, the war was not shortened by even one day by demoralization due to civilian deaths.  Even in the case of the Atomic bomb drops—which were widely viewed as forcing the Empire of Japan to surrender before a hugely costly invasion of the Home Islands—it was not the vaporization of the population of two cities that caused the ultimate surrender, but the calculation of the General Staff that the military would be rendered useless by atomic attacks on their forces and equipment.
Modern Terrorism is the war of the weak against the strong.  And it assumes that enough mayhem will break the will of whatever presumed oppressor.  But there is no real difference between leaving a bomb in a mailbox and flattening a neighborhood with drones.  It is simply a matter of scale and technological sophistication.
All modern war is, in essence, terrorism.
In the mid 1990’s I was asked to write a poem for a Memorial Day Sunday service at the Congregational Unitarian Church in Woodstock.  I was asked to write something that memorialized ALL of the war dead.  Using the headlines of the day—a time when our nation was supposedly at peace but while—this is what I came up with:
In the Century of Death
They are like that grainy photo on page six
of a million tires burning somewhere in New Jersey.
We shake our heads
and click our tongues
with disapproval and dismay,
reflect a split second
before we turn the page
and hurry on to check out
Ann Landers,
the crossword puzzle,
National League standings
or the price of gold in London.

They are the dead,
an uncounted century
of waste and carnage,
stacked as carelessly and deep
as those tires,
alike the cast off refuse
of industrial efficiency.

And like those tires they earn
a moment of our passing pity
in the rush of our busy lives
between work and soccer practice,
haircut and committee meeting.
Unless by accident we are near
and a pungent change of wind
stings our noses and eyes with acrid smoke
and oily ash drifts
onto our own innocent cheeks.
—Patrick Murfin
Note:  This poem appeared in my Skinner House Meditation Manual, We Build Temples in the Hart, published in 2004 in Boston
Posted by Patrick Murfin at 8:27 AM