Although it might not immediately leap to mind, jazz has long been a musical mainstay of the Christmas Season.  Ella Fitzgerald’s holiday songs are among the best.  Bing Crosby may have risen to fame as a movie crooner, but he was regarded as one of the best jazz singers of his time by people who knew what they were talking about.  The Vince Guaraldi Trio brought a California jazz vibe to A Charley Brown Christmas.  For the more adventurous bebop stars like Charlie Parker riffed on Christmas classics.  Even discounting the soporific smooth jazz of Kenny G. and his ilk, a jazz fan can find plenty to love.  But today we are featuring one of the founding fathers of jazz—Louis Armstrong.
Louis Armstrong and Friends—What a Wonderful Christmas was a great compilation album issued by Decca which ought to be in any Christmas jazz fan’s collection.

All of the Armstrong tracks are fabulous, and feature a variety of settings, including Gordon Jenkins’ lush snows capes for White Christmas and Winter Wonderland, and Benny Carter’s swinging orchestra on Christmas in New Orleans. ‘Zat You, Santa Claus? with The Commanders is a hoot and Armstrong Louis also delivered an infectious Christmas Night in Harlem, and by the time he blew some exuberant trumpet on Cool Yule.
Tracks also featured a bluesy Silent Night with Dinah Washington, The Christmas Song with Mel Tormé, and a rare and hypnotic Peggy Lee tune, It’s Christmas Time Again. Lionel Hampton brought good vibes on the blues number Merry Christmas, Baby, Eartha Kitt joined Satchmo on her signature Santa Baby, and Duke Ellington jazzed up Jingle Bells. Lena Horne joined with Santa Claus Is Comin’ to Town, and Louis Jordan turned in a bluesy and soulful May Everyday Be Christmas. 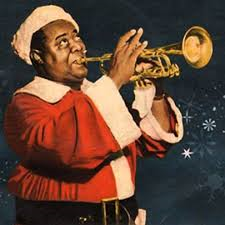 Today we are featuring the lead track, Christmas in New Orleans.  By this point in his long career Armstrong had established a pop following as a gritty vocalist on hits like Hello, Dolly and It’s a Wonderful World.  His newer fans were not disappointed on this cut, but Armstrong also delivered a memorable horn break reminding folks that he was above all a horn man.
Armstrong & Friends
Posted by Patrick Murfin at 5:34 AM