You won’t find The Merry Christmas Polka on the short playlists of those radio stations that switch to holiday music for the season.  You certainly won’t hear it piped into the remaining brick-and-mortar malls and big box stores.  But it is just the kind of stuff  that we thrive on at the Murfin Winter Holidays Music Festival.  We aim to find holiday music across styles and cultures.  And for modern Americans, especially the hipsters, no music is more alien than the polka.
In the post-World War II era, Americans were searching for new sounds.  The big bands that had dominated the music scene since the early 1930’s were still out there and popular but the economics of keeping huge payrolls on the road were taking a toll on all but the biggest names.  Folks were turning to alternatives and for a while competition was tough.  Sophisticated jazz fans were turning to bebop, but that was “listening” not dancing music.  Western Swing, cowboy, and hillbilly music, not yet lumped together as country and western had a strong following.  The Weavers and others led a folk music bomblet.  Rhythm and blues was beginning to attract daring white audiences.  Male and female close harmony quartets and trios got a lot of air play and former big band singers were striking out on their own with romantic ballads.  And there was a Latin music craze.  In the days when radio stations were not ghettoized into narrow formats you might hear all of these styles on the same day or program.
Polka was also enjoying newfound broad popularity, escaping from the Polish, German, and Czech enclaves in the big northern industrial cities like Pittsburg, Detroit, Chicago, and Milwaukee.  It was fun and everybody got up and danced.  Returning veterans like my late father in law Art Brady and his pal and brother in law Al Wilczynski could strap on their accordions every weekend and make almost as much money as at their blue collar day jobs playing taverns, dance halls, VFW and Elks halls, high school dances, and even on the radio. 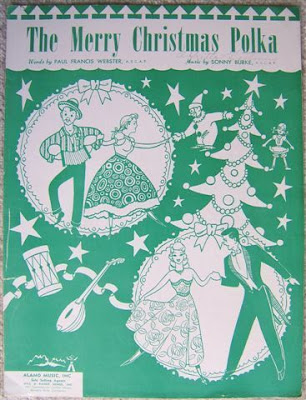 Popular music stars noted the trend and some tried to ride it.  In 1950 composer Sonny Burke and lyricist Paul Francis Webster, Tin Pan Alley journeymen with no long connection to the sound penned The Merry Christmas Polka and shopped it around to record labels.  Not surprisingly North Dakota’s Lawrence Welk Orchestra, a sweet big band that often featured polkas, issued a side.  So did the Tennessee thrush Dinah Shore.  But the Andrews Sisters, struggling to regain their war-time popularity fronting Guy Lombardo and his Royal Canadians got a hit record with it.
It was covered later by famous and obscure bands and was a minor hit for country music’s Jim Reeves and was covered by other artists including Tex Ritter.  Many early country artists mixed in Polkas to appeal to their fans in the Dakotas, Minnesota, and the Canadian Prairie Provinces.
The song is also popular to this day with Tex-Mex bands and sung with gusto in Spanish.
Posted by Patrick Murfin at 5:56 AM