Friday night my wife Kathy Brady-Murfin and I enjoyed a rollicking, tuneful, dance happy production of Irving Berlin’s Holiday Inn at the Marriott Lincolnshire Theater.  It was one of the best shows we have seen at that venue.  More on that production later.  You probably know that the most played and beloved secular American Christmas song—White Christmas—was first featured in the 1942 movie musical upon which the stage version was based. It was not one of the elaborate production numbers but was a simple parlor piano duet by Bing Crosby and Marjorie Reynolds.  It was not expected to be a hit, but it struck a deep chord with American GIs far from home.  The rest is history.
The idea of a film based on country inn that opened as an entertainment venue only on holidays was Irving Berlin’s own.  So was the idea of writing original songs for each holiday.  Eventually he penned 12 new songs including White Christmas and another soon-to-be seasonal classic Happy Holidays.  Also included in the film was Easter Parade, written by Berlin for the 1933 Broadway revue As Thousands Cheer.
Berlin signed with Paramount Pictures in 1940 to write the songs for a film based on his story idea.  The studio intended it to showcase its most bankable star—Bing Crosby.  The studio signed Mark Sandrich, who had helmed four of the great Fred Astaire-Ginger Rodgers musicals at RKO.  He brought Astaire along, on loan from his studio for a dream team matchup of two of the biggest movie musical stars. 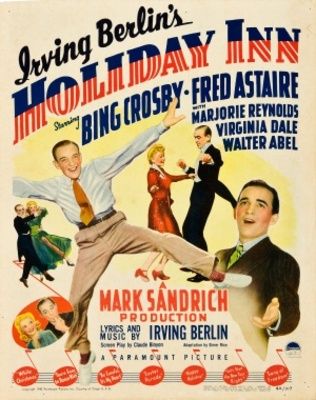 Casting the female lead was trickier.  Paramount, not the richest of studios, already faced a big payroll with its stars, Irving Berlin, and Sandrich plus the costs of the elaborate production numbers, could not afford an A list star who they would have likely had to borrow from a major studio.  After rummaging around the role of Linda Mason, the fresh-faced wanna-be performer, went to Marjorie Reynolds, a starlet rather than a star, who had mostly worked in two-reel Westerns with the likes of Tex Ritter and young Roy Rogers.  Famous or not Reynolds turned out to be a lovely singer and accomplished dancer who had no trouble keeping up with the men.
The second female lead went to an even lesser known performer, Virginia Dale, a former Miss California and a hoofer as the faithless Lila Dixon.
The film premiered on August 4, 1942 and was an immediate hit—Paramount’ top grossing film of the year.  It easily returned its hefty $3.2 million budget.  The music from the show also did well.  As expected the Valentine’s Day romantic ballad Be Careful, It’s My Heart did well even if it never exactly became a Berlin standard.  But White Christmas really took off after a slow start breaking into the Billboard chart in late October and staying at or near the top for the next 11 weeks.  It went on to win the 1943 Academy Award for Best song.

Crosby’s studio recording of the song originally included in Decca 78 rpm album of songs from the show was released as a single and sold so briskly that it damaged the master recording and Crosby had to go back in the studio to record it again in 1947.  That version easily became a #1 hit and is the one most heard today.  In 1949 Crosby included it in his Merry Christmas album which has never gone out of date.  It became the title song of the 1954 Technicolor film White Christmas staring Crosby, Rosemary Clooney, Danny Kay, and Vera-Ellen, another all-Irving Berlin musical that became a holiday classic of its own.
Taken together the 1942 and ’47 versions of the song are estimated 50 million copies, the most by any release and the biggest-selling single worldwide of all time.  It returned to the Billboard Pop Chart twenty times before the magazine created a distinct Christmas chart for seasonal releases.
White Christmas is also the most recorded song of all time with over 500 covers by other artists, several of which became hits in their own right.
A Broadway production of Holiday Inn opened in October 2016 after premiering at the Goodspeed Opera House in Connecticut 2014.  It was a re-imaging of the original film which made some significant changes including setting the story in post-war 1946 and ’47 and rewriting much of the first act.  The show was filled out with a number of other Berlin songs.  Although it ran for only a little more than three months on Broadway, the show had excellent reviews and earned a Tony Award nomination for Best Choreography for Terry James’s electric dance numbers.
James brought the Broadway show to the Marriott doubling as choreographer and director.  He remounted his dance numbers for the open in-the-round with dazzling results, especially the spectacular tap dance routines.  He also established each member of the chorus as a unique and consistent character without much, if any dialog, no easy feat.

The cast of solid musical theater pros with Broadway, major touring company, and regional theater credentials made the show at the Marriott.  No one tried to simply ape the original film stars, but made the roles their own.  Michael Mahler gives crooner and principle romantic lead Jim Hardy a touch of nerdiness.  Will Burton as hoofer Ted Hanover has sharper edges and a bit more vanity the Astaire’s charming turn as Hardy’s partner turned romantic rival.  The role of Linda Mason as played by Johana McKenzie Morgan was substantially different than the starry-eyed show biz neophyte in the movies.  The play has recast her as the daughter of the family which originally owned the farm that Hardy buys.  She is now older, almost a spinster local school teacher who long-ago had a flirtation with a performing career in New York. Kimberly Immanuel makes the faithless dancer Lila Dixon a touch more venal and sultrier than Virginia Dale.
But a character that was invented for the play, Louise, a self-described handy man and fixer-upper who more or less comes with the farm house and becomes Hardy’s devoted accomplice in trying to make the New England stone farm productive and who plays cupid to Hardy and Linda.  Marva Grandy turned in a comic/singing/dancing tour de force and drew cheers from the audience.
Another new character, Charlie Winslow, a ten year old bank messenger who delivers nothing but bad news to Hardy and who is a naughty student of Linda Mason, is played with panache by Patrick Scott McDermott who has more professional acting credits under his belt than most performers three times his age.  And he does it without being child-actor cloying cute.
Holiday Inn runs through January 6 at the Marriott and has been playing to packed houses.
Here is the original performance of White Christmas from the movie.
Posted by Patrick Murfin at 8:11 AM