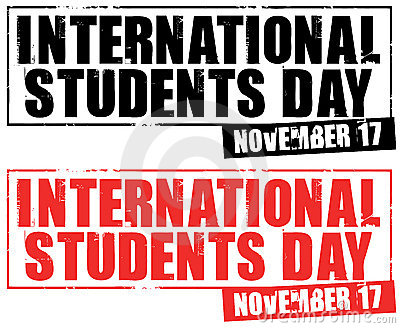 International Students Day is such a hot potato that even the United Nations will not support it.  Wonder why?

Note to all of my younger readers—if I have any. Today is International Student’s Day but you would not notice it at any American school, college, university.  Why? Because the day honors students not just for academics, but for their traditional role as being a kind of collective public conscience, the bearers of high ideals, and a thorn in the side of arbitrary authority everywhere.   In other words pretty much exactly what our oligarchs and authorities do not want.  They would prefer you train quietly and diligently to seamlessly become cogs in the machinery of their prosperity.  Or if you must blow off steam, do it at football games, keggers, or meaningless hook-up sex.  Anything but protest.

I come from a quaint generation that took student activism as a given inspired by the Civil Rights Movement and protests against the War in Vietnam.  We paid our dues in innumerable marches, sit-ins, Freedom Rides, the Streets of Chicago, university occupations, and at Orangeburg, Kent State, and Jackson State.  But after the war wound down and the Draft became an empty threat, campuses quieted.  Not that student activism ever entirely disappeared—there was always a level of activity and issues that raised the passions of some.  But no mass movement, no sense of common purpose.  In fact in many places conservatives organized effective counter presence.

Millions, including students, joined in mass protests and marches to try and stop a post-9/11 invasion of Iraq, when the war actually started there was not much of a sustained movement against it and what there was waned as the War on Terror  dragged on interminably, becoming just background noise.

The most significant new mass social movement in decades, the Occupy Movement, was spearheaded by young post-college adults whose lives and hopes had been disrupted by the economic crash of 2008 and crushing student debt.  As it spread across the country from city to city students became involved and there were some actions on campus as the infamous pepper spraying of non-violent students at Santa Monica College, it never really became a student movement.

But more recently things have begun to change. 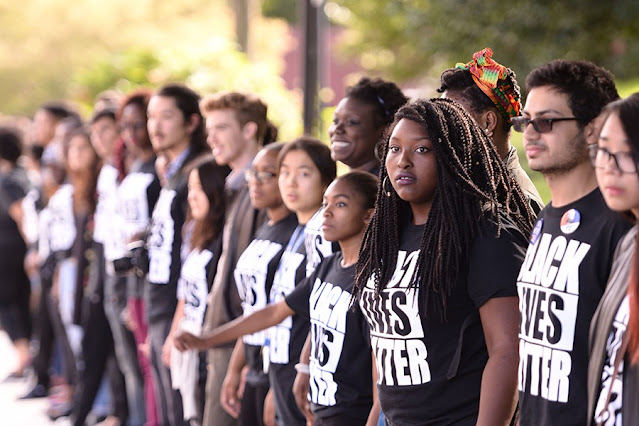 Youth, including high school and college student did become the driving force behind the next important development—then Black Lives Matter Movement.  But at first they were acting and reacting on the streets not as students per se.  That escalated this year after the murders of George Floyd, Briana Taylor, and others.  In many communities students spearheaded efforts to remove police from their schools. 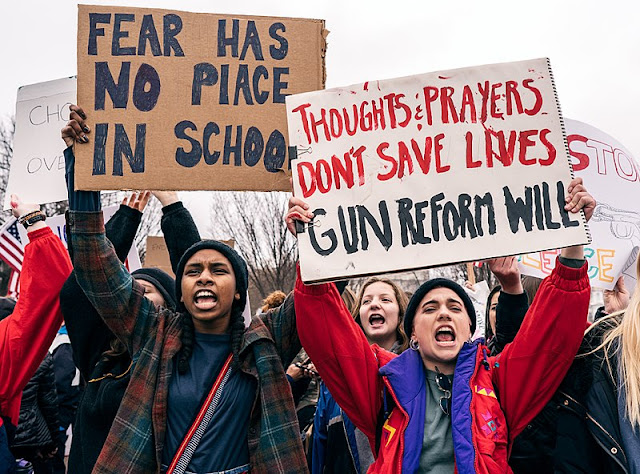 After yet another school mass murder at Marjory Stoneman Douglas High School in Parkland, Florida student survivor organized what became a national anti-gun violence movement, #NeverAgain with school walk outs and local and national protests and marches.  They were also very sophisticated in the use of both social media and messaging in mainstream media.   And they sustained activity well beyond the first flush of actions in 2018 lobbying state and Federal lawmakers for significant action on gun control, organizing boycotts of businesses supporting the National Rifle Association (NRA), and conducting youth voter registration drives,

There were other stirrings—the Dreamers movement and immigration protests, the anti-rape culture movement.  Students seem no longer so domesticated.  But they were not alone on campuses anymore.  A vicious Alt-right movement—read racist and white supremacist—has been emboldened. All of which recalls the events that inspired the creation of International Student’s Day. 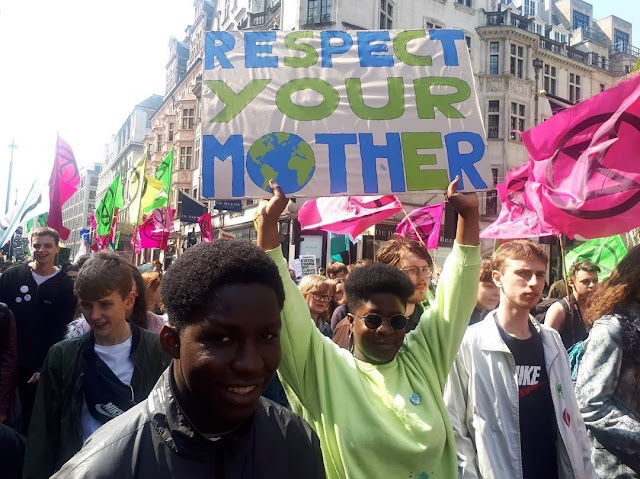 Student-led Climate Strikes around the world have been diverse and multi-cultural befitting a global vision.

But by far the most significant development is the world-wide movement inspired by Swedish teenager Greta Thunberg and her Friday Climate Change strikes.  In September 2019 those scattered actions became the Global Climate Strike and continues as Extinction Rebellion.  Importantly Third World students have joined privileged Europeans and North American in leadership of the still growing movement.

International Student Day owes its origins to the dark days following the Nazi occupation of Czechoslovakia in 1939.  The country was perhaps the most sophisticated in Eastern Europe with a large and prosperous middle class which placed value on what was called high culture.  Education was particularly esteemed and it had one of the highest percentage of its young people enrolled in universities in the world.  In Prague many of those students had watched glumly as German troops poured into the city in March.

The death of student Jan Opleta who was shot during an anti-Nazi march in Prague sparked an even greater protest at his funeral.

Some students fled the country with their families, it they were able.  Jewish students were expelled and Jewish professors fired.  Some students, particularly young Communists and left Social Democrats went underground and began to form what would become a resistance movement.  Most stayed fearfully at their studies, but many were determined to protest the subjugation of their country.

On October 29, the anniversary of the Declaration of the Czechoslovak Republic in 1919, students of the Medical Faculty of Charles University held a street rally which was violently suppressed by the Nazis.   Among the wounded was Jan Opleta who was shot and died of his wounds on November 11. 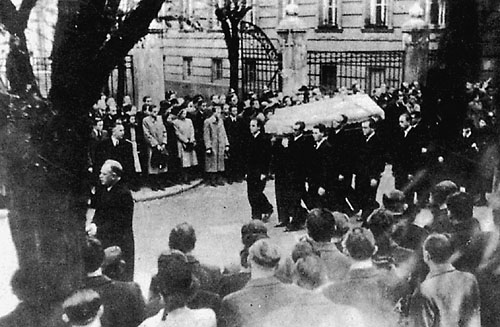 Opleta's funeral on November 17, 1939 turned into a mass protest that sparked a vicious Nazi repression.

Students from all over Prague and the now splintered Czechoslovakia turned out by the tens of thousands to make Opleta’s funeral procession into a mass protest on November 15.  Students expected reprisals.  What they got was beyond any of their imaginations.

On November 17 the Nazis stormed the University of Prague and other campuses.  All universities around the former nation were immediately closed and their students ejected.  1,200 were rounded up and deported immediately to concentration camps.  Others would be picked up and arrested over the next year.  Few of those sent to the camps survived the War.

The celebration was kept alive in the post war years by the successor organization to the ISC the International Union of Students.  Along with the National Unions of Students in Europe and others there has been an on-going attempt to get the United Nations to officially recognize the day along with celebrations for Women, Children, Indigenous Peoples, and such.  The effort has been met with what might be called benign neglect.  It turns out a lot of governments are worried about politicized students.  And support has been forthcoming and withdrawn depending on whose ox is being gored by students in the street.

Take the case of the old Soviet Union and its Eastern Bloc allies.  They originally embraced the celebration as an extension of anti-fascism.  But that changed after another incident in Prague. 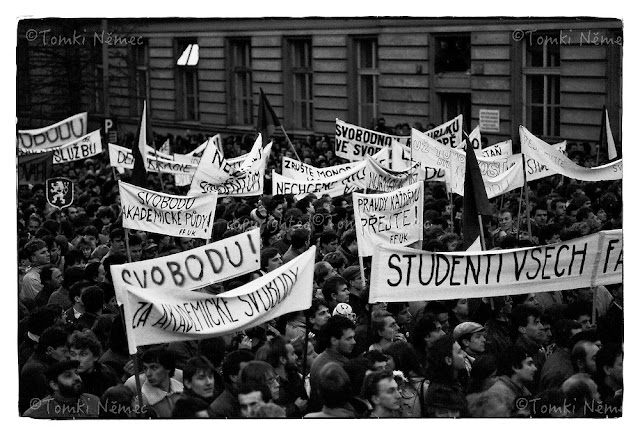 Czech students to the streets again on November 17, 1989, the 50th anniversary of the anti-Nazi protests.  The uproar over the violent repression of the march led directly to the Velvet Revolution and the ouster of the pro-Soviet government.

In 1989 independent student leaders and the official Student Union organized mass demonstration for the 50th anniversary of the attack on Czech schools and students.  The 15,000 students who took to the streets in a peaceful parade used the opportunity to criticize the Communist Party and government on an array of issues.  Police responded with a predictable baton attack leaving many wounded and one dead.  The dead man turned out to be a secret police agent who had infiltrated the students but had gotten too close to his own government’s clubs.

Students did not realize the dead man was an agent, however, and rumors of the death of a comrade swept the capital.  A student strike was proclaimed and supported by actors and others.  The subsequent uproar led directly to the Velvet Revolution and the ouster of the Communist Government breaking the hold of the Soviet Union on Eastern Europe.

After the fall of the Berlin Wall and the collapse of the Soviet Union, European student groups fractured on ideological lines.  In the chaos, international coordination of Student Day observances fell by the way side, although many countries and national Student Unions carried on independent celebrations.

Since then students have been at the forefront of protest and rebellion throughout the former Soviet empire, in China’s Tiananmen Square, in the Arab Spring, in anti-austerity protests across Europe, in Istanbul, and dozens of other places around the world.  They protest against tyrants of the Left and of the Right, against oligarchic wealth, and religious zealotry.   No wonder governments are so skittish about encouraging them with United Nations recognition.

At the World Social Forum held in Mumbai, India in 2004 various student groups and national unions began to discuss a re-launch an official, coordinated movement.  The movement has picked up steam, particularly in Europe.

In 2009 there was a massive commemoration of the 70th Anniversary and a major conference held at the University of Brussels.  Among the actions taken was a resolution pressing for the adoption of a European Student Rights Charter.

But still no participation in the USA.  Hey, here’s an idea, young readers.  What say you start something….

Posted by Patrick Murfin at 6:55 AM