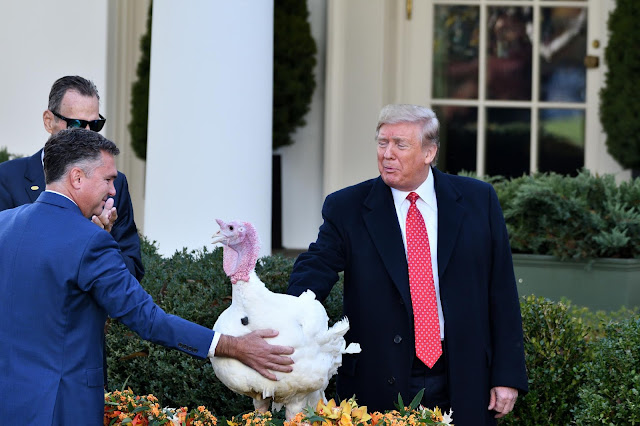 Pardoning a turkey for Thaksgiving in 2019.  Trump plans to emerge from his bunker this week to do it again.  Be sure that he will make the tradition about him and not the Tom.

Note—On Tuesday Donald Trump is scheduled to perform the annual Turkey Pardon in a brief White House ceremony.  He has not had a public event on his schedule in 16 days, made just four official appearances since November 3, and only spoken publicly three times. With exception of golf outing like the one he did on Saturday when he ditched a virtual G7 economic summit event, buzzing a MAGA rally on the mall with his motorcade, a visit to Arlington National Cemetery on Veterans Day, he has not left the White House.  Presumably he has decided that the tradition is popular enough with his base to be worth the effort to tear himself away from Tweeting and plotting to subvert democracy to make the effort.  It may also offer an opportunity to ad lib some remarks that will scandalize most of the nation—perhaps riffs on pardons for his cronies or himself.  If he does his base will adore him even more.  But as I discovered five years ago Republicans had a different view of turkey pardons when Barack Obama did it.  Our divide was deep and festering even then as is plain from this blast from the Blog past.

It’s mid-afternoon and I am still working on the blog post I had planned for this morning.  Look for it tomorrow.  But on a break from working on it I found a post on Facebook that intrigued me.  But it was from PoliticusUSA, a liberal web site I have learned not to trust. It often skews news items, misrepresents the contents in headlines, exaggerates, and passes on from sources even less reliable.  Having been embarrassingly burned a couple of times I have learned no matter how much their stuff might appeal to my natural political leanings, positions, and prejudices not to pass it on or share on social media.  My conservative friends—and I still have a few—might do well to review their own sources of information confirming their preconceptions.  But then if they did so sites from The Drudge Report and Breitbart not to mention Fox News might go out of business.  Those have been proved to have their pants on fire repeatedly by neutral fact checkers.

But in the case of the post that grabbed my attention, I decided to investigate if there was even a morsel of truth in the Politicus meme.  And lo and behold this time there was.  The story checked out.  And it was too good, and revealing not to pass on from the original source material—Public Policy Polling (PPP)

PPP is a North Carolina based polling organization ranked for its reliability, accuracy, and methodology as one of the best in the business.   The company only works for Democratic or Liberal campaigns which value it for telling them the truth about public opinion, not just parroting back to them what they want to hear.  Separate from the polls that they conduct for campaigns, the company of conducts “temperature measurement” polls which reveal the depth of ideological commitment of some voters—and often reveals remarkable gullibility.  Questions in these polls sometimes seem whimsical or ridiculous—but some voters take them with absolute seriousness.

They have polled questions like the approval rating of God, whether Republican voters believe President Obama would be eligible to enter heaven in the event of the Rapture, and whether hipsters should be subjected to a special tax for being annoying.  Although these polls are sensational enough to attract media attention and thus boost the PPP brand, they are conducted as straight forwardly as any campaign polling.  Unlike the notorious push polls favored by Republican operatives, the questions are not framed in inflammatory or prejudicial language intended to push the pollee to the desired response.  They are put forward matter-of-factly an in neutral language.  They use Interactive Voice Response (IVR), an automated questionnaire used by other polling firms including SurveyUSA and Rasmussen Reports.  Sample sizes are large enough to be meaningful and guard against anomalies.

In other words PPP polls tend to reflect what people are really thinking.  Which can sometimes be frightening.  It’s a Bizzaro world out there folks. 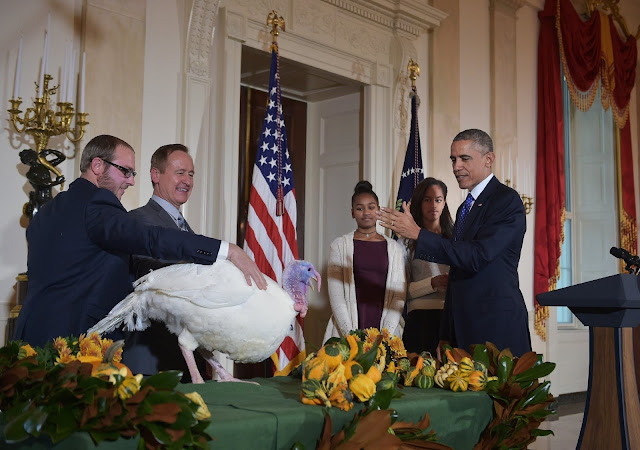 President Obama officially pardoning Cheese the Turkey in 2014.  Apparently Macaroni was camera shy.  Or was it a conspiracy to convince Americans he had only pardoned the traditional single bird?  Also remember the daughters Sasha and Malia were attacked by conservative operatives for their alleged violations of approved attitude at this occasion.

The poll question that grabbed my attention asked “Do you approve or disapprove of President Obama’s executive action to pardon two turkeys rather than the customary one turkey at Thanksgiving?”

You might recall that last year to white gobblers named Macaroni and Cheese were saved in a holiday tradition dating back to John F. Kennedy spontaneously spared the turkey donated to the White House annually by the National Turkey Federation and the Poultry and Egg National Board on Nov. 18, 1963, just four days before his assassination.  Other presidents informally followed suit, making for a nice heartwarming annual story.  Ronald Reagan was the first to call it what the press already was—a pardon, but it was George Herbert Walker Bush who first drew up and issued a formal pardon.  The birds are generally donated to a local petting zoo.  The First Families, if they are so inclined, dine on a traditional non-celebrity turkey feast. 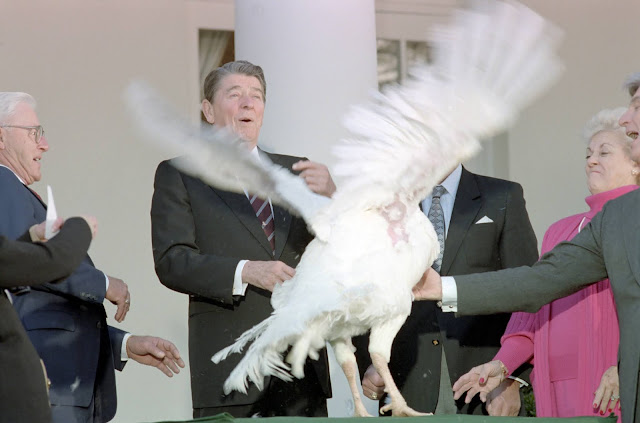 Republicans apparently had no objections when Ronald Reagan first used the word Pardon  in sparing Charley in 1973.


You would think such a charming little tradition would be non-controversial.  You would, of course, be wrong.  Nothing Barack Obama does is non-controversial in these hyper partisan times.  If Fox News were to suddenly report that Obama respires oxygen a significant portion of their viewership would be dead of asphyxiation by morning. 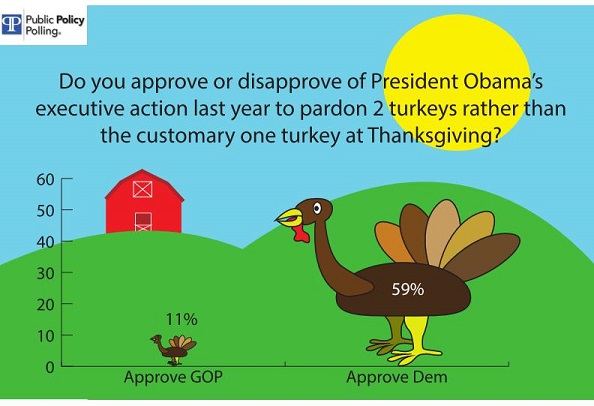 Let PPP itself report the outcome of their question.

The examples of the GOP’s reflexive opposition to President Obama’s agenda are many but this may be the best one yet: by a 27 point margin Republicans say they disapprove of the President's executive order last year pardoning two Thanksgiving turkeys (Macaroni and Cheese) instead of the customary one. Only 11% of Republicans support the President’s executive order last year to 38% who are opposed- that’s a pretty clear sign that if you put Obama's name on something GOP voters are going to oppose it pretty much no matter what. Overall there’s 35/22 support for the pardon of Macaroni and Cheese thanks to 59/11 support from Democrats and 28/21 from independents.

So there you have it.  Are you surprised?

PPP’s complete report on this round of polling also included questions on which Presidential Candidate would be the most likely to say something inappropriate at the table and ruin Thanksgiving Dinner (Donald Trump in a run-away), Thanksgiving menu choices (cranberry sauce or not turns into a generational divide) and Christmas issues—Americans are united in thinking the Starbucks coffee cup issue is ridiculous and in opposing too early playing of Christmas music.  Perhaps there is some dim hope for unity after all.  Check out PPP’s report a here.

*Just the sort of inflammatory headline to avoid like the plague.  This has been a Public Service Example.