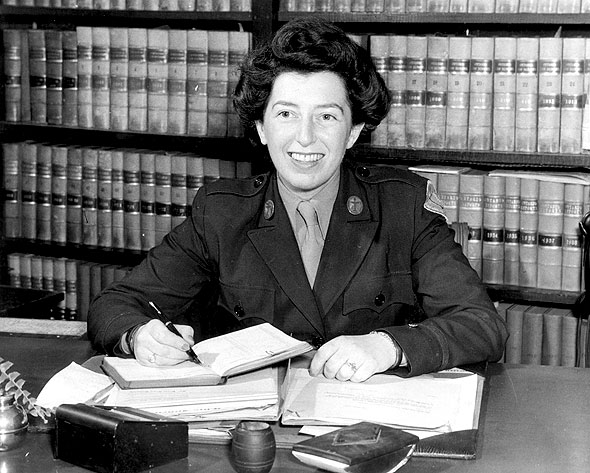 Lotta Hitschmanova as she began service as the Executive Director of the Unitarian Service Committee of Canada in October 1946.

If you live this side of the border of the Land of the Great White Grandmother, chances are that you never heard of Lotta Hitschmanova.  But you should learn about her.  She was awesome.

Canadians of a certain age will remember her for her once ubiquitous annual fund raising appeals on radio and television and in smartly produced short films for the Unitarian Service Committee of Canada (USCC) which she served as Executive Director for many years.

Her story begins in Prague when the Czech city was still a part of the Austro-Hungarian Empire on November 28, 1909.  Her birth name was Lotte Hitschmann.  Her father was a prosperous malt merchant and the secularized Jewish family lived in modest wealth and comfort.

She was a gifted student who excelled at the progressive and co-educational Stephans Gymnasium. She studied philosophy and mastered several European languages at the University of Prague and then went on to study political science and journalism at the Sorbonne in hopes of entering a career in international diplomacy.

In 1935 Lotte returned to Prague where she completed her Ph.D. studies and launched a successful career as a freelance journalist often contributing material to Czechoslovak, Rumanian, and Yugoslav newspapers.  As the menace of Hitler and Nazism rose she became noted for her outspoken anti-fascist beliefs and articles.  By 1938 she changed her name to the Slavic Lotta Hitschmanova as a protest to German hegemonic ambitions.

When Germany annexed the Sudetenland Hitschmanova learned that she was on a list of hostile journalists to be detained.  She was forced to flee her homeland leaving her parents and a younger sister behind. She first fled to back to Paris and from there she went to Brussels, Belgium, where she resumed her journalistic career.  But the war kept catching up with her and for the next few years she alternated between a variety of journalism and humanitarian jobs while often finding herself a stateless refugee. By late 1941 she was in Marseilles in Vichy France where she worked as a secretary at charity for refugees.  It paid next to nothing and the tiny woman fainted on the streets of starvation after which she was taken to a clinic run by Unitarian Service Committee. 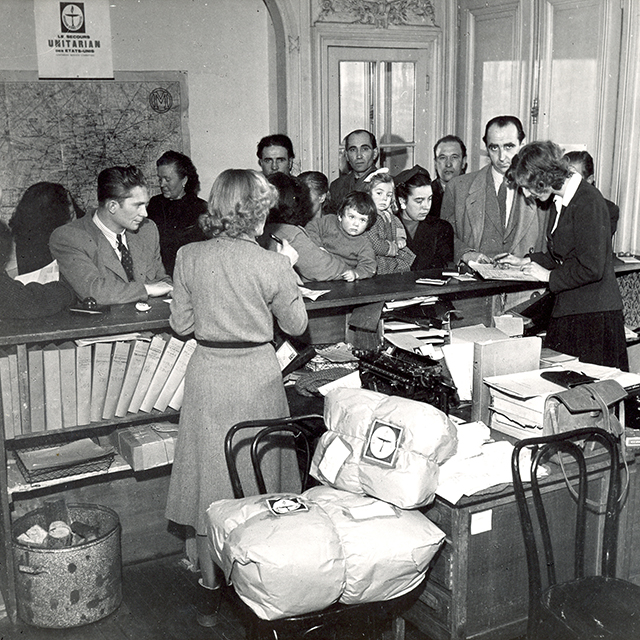 After being taken to an Unitarian Service Committee clinic in Marseilles, Hitschmanova went to work for the agency as a translator.  The USC was a rare beacon of hope for desperate refugees from all over Europe.  Here the agency distributes relief bundles.


It was a fortuitous match.  Soon she was volunteering her services with the USC as a translator and then as a liaison officer with the Czech relief agency, Centre d’Aide Tsechoslovaque.  Her work was valued by the USC, but officials recognized that she was still in danger.  In 1942 they arranged her escape from Europe via Lisbon on a converted freighter crammed with other refugees and headed to New York.

Like many Jewish refugees even with the help of the USC, Hitschmanova could not gain permanent refuge in the U.S.  After stopping in Boston to deliver highly sensitive documents detailing the dangerous work of the USC in Europe, she went to Canada, which offered her asylum.

She later recalled “exhausted, with a feeling of absolute solitude in an entirely strange country...I came with $60 in my pocket. I had an unpronounceable name. I weighed less than 100 lbs, and I was completely lost.”  Yet relentlessly resourceful, within two days she found employment as a secretary and three months later was in Ottawa where she worked as a Department of War Services postal censor.  She read the letters of German prisoners of war and scoured them for useful military intelligence.

Still deeply impressed by the selfless work of the USC, Hitschmanova joined the Unitarian Church of Ottawa.  She also continued her work for refugees with the Czechoslovakian National Alliance and by raising money for Czech War Services in London.  She regularly contributed articles to the Canadian press and made speeches on behalf of her causes.  Toward the end of the war she went to work for the United Nations Relief and Rehabilitation Administration.

All during the war she never gave up a desperate search for her parents and sister Lilly.  She learned that for a while her parents were held at Terezin, a model concentration camp used as a showplace for the Red Cross and international diplomats.  Then she got the devastating news that they had been taken from that relative comfort and safety and had died in the gas chambers of Auschwitz.  Eventually she located her sister living in Palestine with her husband.  Both eventually joined her in Canada.

With no family to return to, Hitschmanova decided to remain in Canada.  She turned down several excellent job offers.  Instead, she determined to serve the uprooted refugees still in Europe.  In July 1945, she helped to organize the Canadian branch of the Unitarian Service Committee, which was affiliated with both American Unitarian Association and the Unitarian Church in Canada.  Senator Cairine Wilson, a liberal icon in Canada, was named the Honorary Chairwoman, but as Executive Director, Hitschmanova ran the show with systematic energy and efficiency.

At first registered under the War Charities Act the Canadian committee was restricted to fundraising only through Unitarian congregations and to individual Unitarians.  When the law changed in February 1946 Hitschmanova energetically began her public appeals citing the great need.  At first funds were directed to Czechoslovakia and France.

That spring she made her first annual tour to inspect the work in the field.  She adopted a military style uniform modeled after that worn by American WACs.  She found the outfits useful in gaining admission to even restricted areas.  Besides they were comfortable and made packing for her extended trips easy.  She wore the uniforms at home and abroad for the rest of her life.  They became her trademark as she rose as a public figure in Canada.

Despite her affection for the Boston based USC, it didn’t take long for her to come into conflict with its leadership.  They insisted that all field operations be headed by an American.  She felt that those on the ground and familiar with the situation knew best.  She preferred to empower local partner organizations and their leadership by providing them with needed funds and perhaps technical support.  Her secondary goal was to make those partner organizations self-sustaining and independent as quickly as possible.

There are three basic principles in the field of the art of giving aid. To come as an open-minded friend and good listener, when offering help; to say goodbye to a project when it can continue on its own; to serve with a personal touch, because a relationship of confidence must lift your aid beyond the realm of a simple business proposition and prove that you really care.

To accommodate that philosophy in 1948 she re-organized the Canadian Committee completely independent of not only the Boston based USC, but of the Canadian churches as well.  Despite its independent status, the USC Canada continued to draw support and volunteers from Unitarian congregations and most proudly considered it “ours.”

The current logo of the Unitarian Service Committee Canada.

In the first full year of operations in 1946, Hitschmanova set a pattern which she would repeat yearly—three months of intense fund-raising in Canada, four months overseas to supervise programs and investigate possible new partners, and months at home reporting on her findings and producing an annual film about the Committee’s achievements.  That first year she raised $40,000 and collected 30,000 kg of clothing for distribution in the refugee camps.

She particularly homed in on the needs of children, making a project to supply prosthetic limbs to maimed victims a high priority, and establishing one of the first adopt-a-child sponsorship programs that became a model for many others. 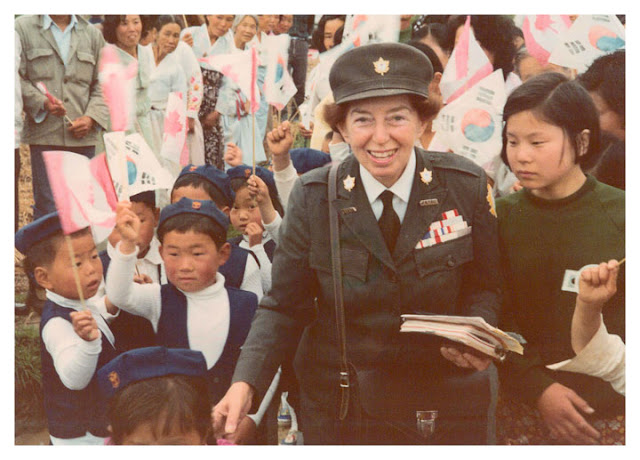 Hitschmanova with Korean orphans on one of her annual world-girdling inspection tours of  USCC humanitarian aid projects.  The organization expanded beyond Europe to include projects like this in Korea and others in India, Africa, and serving Palestinian refugees.

She found herself showered with honors.  According to a biographical sketch in the Dictionary of Unitarian and Universalist Biography by Joyce Thierry:

Dr. Hitschmanova received numerous awards, including the 1975 Woman of the Year for India by Prime Minister Indira Gandhi. By this time, grateful governments around the world had acknowledged her work in their countries in a variety of ways: the Chevalier of Public Health from the Government of France and the Gold Medal from the Red Cross of France, 1950; the Medal of St. Paul from Greece, 1952; Public Service Medal from the Government of South Korea, 1962; Athena Mesolora Gold Medal from the Government of Greece, 1967; Officer of the Order of Canada, 1972; the Royal Bank of Canada Award, 1979; and Companion of the Order of Canada, 1980. In 1983, she received Officer of Meritorious Order of Mohlomi, Lesotho, and was only the third person to be given the Rotary Award for World Understanding. She refused to accept honorary doctorates from universities, saying she had worked hard enough in Paris and Prague to earn her own doctorate.

In 1982 after 37 years at the helm, ill health finally forced Hitschmanova to retire.  Sadly in her remaining years she suffered from Alzheimers.  She died of cancer on August 1, 1990 at the age of 79.  She was widely mourned across Canada and by the hundreds of thousands whose lives she touched around the world.  Her memorial service was held at her beloved Ottawa Unitarian Church.

In perhaps an even more profound tribute to her vision the modern Unitarian Universalist Service Committee, heir to the old Boston based organization, now follows Hitschmanova’s model of partnering and nurturing organizations on the ground.