The Real Last Battle of the Indian Wars— Bear Valley 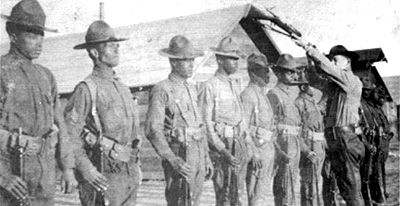 Most history books will tell you that the last “battle” of the American Indian Wars was at Wounded Knee on December 28, 1890 when troopers of the 7th Cavalry opened fire on captured “renegade” Lakota.  It was more of a massacre than a battle in which more than 150 men, women, and children were killed in the snow and some troopers died in their own cross fire.  It was certainly the bloodiest of late Indian war battles.  But not the last.  The Drexel Mission Fight occurred a day later between fleeing Lakota and elements of the 7th and 9th Cavalry.

Those may have been the biggest engagements, but over nearly the next 30 years there were skirmishes between the Army and small groups of Native Americans across the West.  The final battle was fought on January 9, 1918 at Bear Valley near the Arizona border with Mexico.

Yaqui troops in Sonora in 1916.  During the Mexican Revolution Yaquis fought with various factions in hopes of re-establishing autonomy on their traditional lands.  Progressive President Francisco Madero promised the tribe a homeland before he was killed.  Waring generals all betrayed them and the tribe fought all who tried to attack them.

The episode was actually a spillover from a long war within a war by the Yaqui people of Sonora for an independent homeland in Mexico.  That war had essentially been going on for decades and had been enveloped by the larger Mexican Revolution.  Many Yaquis routinely crossed the porous border into the United States to work on the cotton farms of southern Arizona where they were prized workers noted for their diligence and endurance under brutal heat.  The Yaqui would pool the money they earned and buy firearms—mostly Winchester 30.30s or imported German Mausers—and ammunition to take back into Mexico to continue the fight.

Late in 1917 the military governor of Sonora, General Plutarco Elías Calles, informally requested help from the United States government to quash the cross border arms trade.  At the same time local ranchers were complaining that Yaqui bands were trespassing on their lands and sometimes slaughtering stray cattle for food, or simply for their hides to make quick, crude sandals for crossing the rugged desert terrain.

Most of the US Army, of course, was in or on its way to France.  But not the Buffalo Soldiers of the 10th Cavalry.  After seeing how British cavalry had been cut to ribbons by machine gun fire early in the Great War, the Army had decided not to deploy cavalry in the American Expeditionary Forces (AEF).  Despite the fact that the AEF was commanded by a former Buffalo Soldier Cavalry officer, General John J. “Blackjack” Pershing, the tough and storied American Cavalry was stuck in remote western posts guarding against a vanishing threat of Indian uprising.  It was a bitter pill for both the white officers and Black troopers.

None the less, when The Nogales, Arizona subdistrict commander, Colonel J.C. Friers of the 35th Infantry ordered his men and the 10th to take up a string of positions along the border to try and interdict the arms smugglers, the cavalrymen dutifully followed orders.  At the far end of the line of bivouacs was a position at Atascosa Canyon, a natural border crossing within Bear Valley.  It was wild and remote country, considered a no-man’s land where local ranchers and their families took precautions when traversing.  Frequent reports of slaughtered cattle in the area indicated relatively heavy usage by the Yaqui. 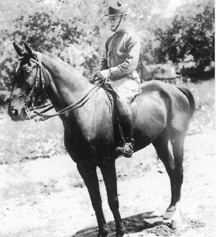 Captain Fredrick H.L. "Blondy" Ryder was in command at the last skirmish.


Early in January 1918 Captain Frederick H.L. “Blondy” Ryder and 30 men of Troop E took up the Bear Valley position.  They camped by an abandoned rancho on a high ridge.  A rock formation provided a sweeping panorama of the surrounding, flat desert land.  Ryder posted signalmen with high powered binoculars on the summit to keep watch.

On January 8 a local cattleman rode into camp and reported that a neighbor had found a fresh beef kill, only parts of its hide stripped for sandals.  The Yaqui were in the immediate area and on the move.  First Lieutenant William Scott and a detail reinforced the observation post.  About mid-day on the 9th Scott used hand signals to show that the Indians were in sight and moving less than a quarter of a mile away.  By the time troopers in camp saddled up they had vanished but Scott used hand signals to show the direction of their movements.

When the Troopers thought they were near their objective they dismounted and advanced in a skirmish line through a rugged draw.  Capt. Ryder decided that they had lost contact and decided to return to the horses, returning to them down a different route.  He soon stumbled on a bunch of abandoned packs.  He knew he must be right on top of the Yaqui.  He reformed his skirmish line the troops advanced again.  They soon came under rifle fire.

Colonel Harold B. Wharfield, a historian of the 10th Cavalry, wrote after interviewing both Army and Yaquis participants in the fight:

…the fighting developed into an old kind of Indian engagement with both sides using all the natural cover of boulders and brush to full advantage. The Yaquis kept falling back, dodging from boulder to boulder and firing rapidly. They offered only a fleeting target, seemingly just a disappearing shadow. The officer saw one of them running for another cover, then stumble and thereby expose himself. A corporal alongside of the captain had a good chance for an open shot. At the report of the Springfield, a flash of fire enveloped the Indian's body for an instant, but he kept on to the rock.

The troops slowly advanced and firing was hot and heavy for about half an hour, although casualties were very light because both sides were fighting under good cover.  Finally the troopers overwhelmed a small rear guard covering the retreat of the rest of the band successfully into Mexico. 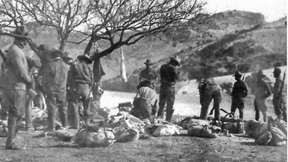 There were 10 captives.  Ryder later wrote:

… It was a courageous stand by a brave group of Indians; and the Cavalrymen treated them with the respect due to fighting men. Especially astonishing was the discovery that one of the Yaquis was an eleven-year old boy. The youngster had fought bravely alongside his elders, firing a rifle that was almost as long as he was tall. ...Though time has perhaps dimmed some details, the fact that this was my first experience under fire—and it was a hot one even though they were poor marksmen—most of the action was indelibly imprinted on my mind. After the Yaquis were captured we lined them up with their hands above their heads and searched them. One kept his hands around his middle. Fearing that he might have a knife to use on some trooper, I grabbed his hands and yanked them up. His stomach practically fell out. This was the man who had been hit by my corporal's shot. He was wearing two belts of ammunition around his waist and more over each shoulder. The bullet had hit one of the cartridges in his belt, causing it to be exploded, making the flash of fire I saw. Then the bullet entered one side and came out the other, laying his stomach open. He was the chief of the group.

Ryder’s men treated the chief’s wounds as well as they were able.  The Captain sent a messenger to try to obtain an automobile to use as an ambulance to transport the gravely wounded man to a hospital.  When none was found the Chief and others were mounted on spare horses for the return to base at Nogales.  The Chief stoically endured the agonizing 20 mile trip and even the uninjured captives suffered because not being as Ryder said “horse Indians” they could barely stay on and suffered bloody chaffing on bare legs or through thin cotton trousers.

Under questioning the Yaqui told their captors that they had only fired on them because they thought they were Mexican and that they would have surrendered immediately if they had known that their pursuers were American.

The Yaqui captives were held for weeks at Nogales while the Army tried to decide what the hell to do with them.  They adapted well.  In fact with three meals a day of the same rations as the troopers, warm tents and blankets they were probably more comfortable than any had been for years.  They adapted well to camp life and were soon doing clean up duty and other chores around the base with little or no supervision.  They were exceptionally clean and orderly and one observer marveled.

At the corral nearly any droppings were allowed to hit the ground. During the day the Indians would stand around watching the horses. Whenever a tail was lifted, out they rushed with their scoop shovels and caught it before the manure could contaminate the ground. It certainly helped in the decline of the fly population.

The troopers and the Indians reportedly became very friendly and admired each other.  All of the survivors—the Chief had died from his wounds—including the 11 year old volunteered to enlist in the Army.

But it was not to be so.  Orders came down from Washington and the Yaqui were transported in chains to Tucson for trial in Federal Court where they were charged with “wrongfully, unlawfully, and feloniously exporting to Mexico certain arms and ammunition, to wit: 300 rifle cartridges and about 9 rifles without first procuring an export license issued by the War Trade Board of the United States,” the Yaquis plead guilty and the men were sentenced by Judge William Henry Sawtelle to only thirty days in jail.  Charges against the boy were dismissed.

The Yaquis were happy with the outcome.  They were afraid they would be deported to Mexico where they would surely have been executed.  Upon release, they vanished from history.  Some undoubtedly melted back across the border.  Perhaps they even renewed their cross border activities.  Others may have stayed in the growing community of Yaqui exiles in Southern Arizona. 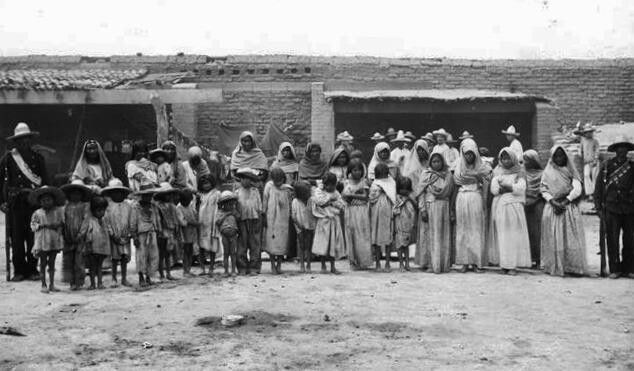 Captive women and children in Mexico during the long Yaqui wars in Sonora.


If this were a last hurrah for the Cavalry, it was not for the Yaqui.  Their fight in Sonora continued until 1928 when the Mexican Army finally crushed the last holdouts in an offensive that employed heavy artillery, machine guns, armored cars, and aircraft.

Posted by Patrick Murfin at 6:45 AM