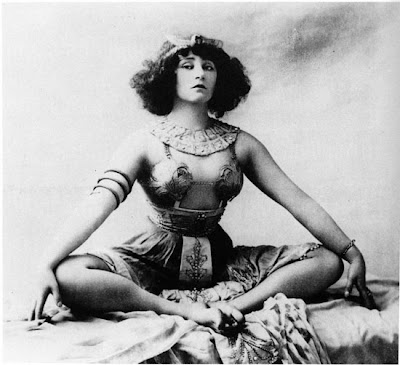 Note:  This entry was originally posted one year ago today and is offered again to satisfy my juvenile and puerile interests.

I admit it. The big reason I picked the birthday of French novelist, sexual adventuress, and outsized personality Colette to write about is so I could print the semi-salacious photo of her decked out as the Queen of the Nile. This blog is not too high minded to provide a little historical cheesecake. The French have an expression that may have become a cliché on the lips of Pepe Le Pew in this country, but is apt none the less—ooh-la-la!

Sidonie-Gabrielle Colette was born on January 28, 1873 in provincial Saint-Sauveur-en-Puisaye, Yonne, in  Burgundy. Bright, buxom, and beautiful, she was married at twenty to an older man, the music and literary critic Henri Gauthier-Villars who wrote under the name Willy. Willy was a bi-sexual and famous libertine. He was also a literary charlatan. Recognizing his wife’s superior talent, he kept her as a virtual slave churning out material that he published under his own name. This, eventually included Colette’s first novels destined to become classics. The semi-autobiographical Claunine series scandalized French society when they were published but are now cherished as charming tales of a strong willed young girl blossoming into a sensual woman.


After fleeing the abusive marriage in her early 30’s Colette did not lose her taste for shocking the Bourgeoisie. By 1907 she was making her living dancing nearly naked on the French stage. That year she partnered with her lover, Mathilde de Morny, the Marquise de Belbeuf who performed as Missy. Their performance of a pantomime Rêve d'Égypte at the Moulin Rouge included an on-stage kiss which set off a near riot and police raid. Colette and Missy had to end their co-habitation but continued as lovers for five years and as friends for the rest of their lives.

Not that Colette could be confined by a monogamous relationship to a woman or a man. The first of several relationships with women may have been with the American expatriate and proprietress of one of the leading literary salons Natalie Barney who sheltered her when she first escaped her husband. Among her female lovers was said to the African-American  singer and dancer Josephine Baker.


Colette also continued to have relationships with men, both love affairs, as with the Italian writer Gabriele D'Annunzio and as a courtesan to wealthy men like Auguste Herriot, the heir to an automobile fortune.


In 1912 Colette married for a second time to Henri de Jouvenel, editor of the newspaper Le Matin. The couple had a daughter, Colette de Jouvenel in whom her mother had little or no interest. She was raised largely by an English nanny and waz seldom visited by her mother.


With the outset of World War I, Colette turned her husband’s rural estate at St. Malo into a hospital for the wounded. Her gracious care was long remembered and she was made a Chevalier of the Legion of Honor in 1920 for her work. During the war she also found time to begin a long collaboration with composer Maurice Ravel which eventually led to the opera L'Enfant et les sortilèges which was finally produced in 1924.


By that time her marriage was over after a scandalous and well published affair with her 15 year old stepson, Bertrand de Jouvenel. Her literary fame was growing. Her 1920 novel Chéri chronicled a long affair between an aging courtesan and a young man. She traced her two characters through two more wildly successful novels.


In the mid-twenties Colette became part of the avant-garde set revolving around Jean Cacteau, who would be her neighbor and confidant for years. By late in the decade she was being acclaimed as the greatest French female writer. Her flaunted affairs were denounced in the conservative press and from the pulpit, even as her novels won rave reviews and huge readership.


In 1935 Colette married for the third and last time to Maurice Goudeket, a Dutch Jew from a wealthy family of diamond dealers. Goudeket, content not to attempt to constrain his still adventurous wife, proved to be her enduring partner. She even assumed his name and became, legally, Sidonie Goudeket, although she still published as Colette.


But war prevented much celebration. With the onset of World War II her international fame gave her some protection against the occupying Nazis, but Colette had to hide her Jewish husband in the attic of her home and assisted many other French Jews either hide or escape. After this became known after the war, she was once again hailed as a hero.


Despite the distraction of the war, Colette achieved the greatest success of her remarkable career which included nearly 50 novels with the publication of the novella Gigi in 1944. The charming story of a courtesan in training made the aging Colette world famous in the post-war years as she found herself one of the most admired literary figures in France. Her reputation grew as Gigi was published around the world, causing new interest in translations of her earlier work in the United States. She personally selected the young Dutch born ballerina Audrey Hepburn to play the title role in a 1951 Broadway play based on the novel. She did not live to see the even more successful musical film by Alan Jay Lerner and Fredrick Lowe starring Leslie Caron as Gigi which went on to win the Academy Award for Best Picture.


When Colette died in Paris on August 3, 1954 at the age of 81, the Catholic Church denied her last rites because of her scandalous liaisons and divorces. But she was given the first state funeral ever given by France for a woman. She is buried in the Père Lachaise Cemetery in Paris where her grave is still a destination of pilgrimage.