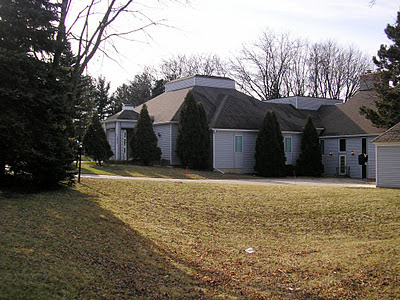 It was a bright, clear day.  The morning sun wasted no time burning off the night’s sharp frost.  By late morning it was more like a pleasant day in March than the supposed dead of Winter.  It was a fine morning for a beginning.
Naturally, I was running late.  Daughter Maureen was driving and had to stop for gas.  Then I steered her the wrong turn. By the time we pulled into the packed parking lot at 5603 Bull Valley Road in McHenry was already 10:50.  The first service of the Unitarian Universalist Congregation formerly of Woodstock was already underway.
I entered and came into a large, long room painted a cool green. Desks for offices were to the left.  Ahead, spilling out of a room at the end, were a knot of folks who could not get seats inside the new sanctuary.  To the right, in a room where coffee service was laid out and another door entered the room, was another clump.  I could hear introductions of new committee chairs inside.
After throwing my hat and coat on a table, I pushed my way into the Sanctuary figuring to find a place to stand at the rear.  At the pulpit, the Reverend Jennifer Slade spotted me.  She spied a lone chair all the way to one side of the room and offered it to me.  Embarrassed by the attention, I muttered that I needed to be able to get out easily because I was scheduled to both usher and read a poem.  A woman with a seat on the aisle just four or five rows back from the pulpit, jumped up and took that distant seat and let me sit.
Settling in, I took the room in.  It was more than twice as wide as it was deep filled with comfortable straight back chairs, a legacy, no doubt of the building’s former life as an up-scale French restaurant.  Banks of multi-paned windows stretching nearly floor to ceiling and sky lights set in the high ceiling bathed the room in bright sun light.  The pulpit and chancel table were set center on low platform, a bank of trees providing a backdrop through the windows.  To my right a bell borrowed from the Buddhists stood ready to be struck with a rubber mallet.  On my left Tom Steffens sat at the grand piano. 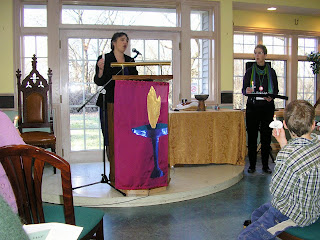 Preliminary business out of the way, Rev. Slade announced that we would open our first worship in our new home as we had finished the last formal service in our old—lighting candles hand to hand and singing Auld Lang Syne.  Then Carol Alfus kindled the Chalice from that common flame.  An emotional moment.  Carol shed tears as she read the words for the Chalice lighting.
The theme for the service was Blessing our Sacred Space and in it we would draw form the Six Sources of inspiration to Unitarian Universalist practice and worship.  M.E. Tanabe shared a poem drawing on the “direct experience of transcending wonder and mystery.”  It was followed aptly by Hymn #1 in Singing the Living Tradition—May Nothing Evil Cross this Door.
Then it was my turn to represent the “words and deeds of prophetic women and men” with my poem Here’s to You, Ralph Waldo:
You have reached across time
and found me dozing on an afternoon,
reached your hand down
and shaken me by the toe
until I stir bewildered.
Wake up! you cry,
the world is waiting to be noticed,
the very autumn air vibrant with miracles,
the incessant sun prying into every dark space
for you, if you will see it,
if you will be it!
The deadest of white males,
you have climbed long-limbered
from the pages of a book
splayed open on my desk,
swept your arm wide around the random piles,
half-read volumes,
half-completed projects,
half-lived life that is my study
and demanded I seize my life,
clear my head of every derivation,
even that from the dust of your own mouth,
and speak at last my own revelation.
So, here’s to you Ralph Waldo,
Dreamer,
Darer,
Doer.
Representing “wisdom from t he world’s religions Lisa Jacobsen, a practicing Sufi recounted how an archangel laid his finger upon the lips of a camel trader named Mohamed and commanded him, “Recite!”   She then led us in an Arabic blessing from the Koran which included taking water poured into our old baptismal font symbolizing the coming into being and members of the congregation were invited to come forward to dip their hands and sprinkle the room and its worshipers.
Religious Education Director Sam Jones, who sits with the Zen Buddhists lit joss sticks and led us in a healing mantra followed by the repeated and resonate striking of the temple bell.
Next up were “Jewish and Christian traditions.”   Bruce Weiss presented the bread and salt traditionally used by Jews to bless a new home.  Rev. Slade read from St. Francis of Assisi’s Canticle of the Sun.
Rev. Slade also represented “Humanist teachings with words from the Humanist Manifesto III.
Lastly Caron Wenzel an environmental educator and activist, and a cultivator of natural herbs who studies Lakota lore, represented “spiritual teachings of earth-centered tradition.  She told how she blessed the building the day before by “rubbing it with sage.” For the service she followed that up with a blessing of native sweet grass braded into a rope and lit in the Chalice flame.  With turkey feathers from her own birds, she fanned the smoke in the four cardinal directions, to the sky, and two the earth.
The concluding hymn was Rank by Rank Again We Stand, the U.U. anthem traditionally sung at auspicious beginnings like ordinations, instillations of ministers, and building dedication.
Finally after repeating our usual closing words, Carol Alfus extinguished the chalice with the words, “We extinguish this flame, but not the light of truth, the warmth of community or the fire of commitment.”  To which the congregation replied, “These we carry in our hearts until we are together again.”
By my count, there were 164 adults and probably two dozen children and teens.  My guess is that I missed ten or more who had to listen from the adjacent rooms and who arrived after I entered the sanctuary.  When Carol Alfus and I counted the collection—sans adding machine since the office equipment hadn’t yet been unpacked, it was double the largest collection I have ever handled.
A lot of work needs to be done to settle in.  Plans are being developed by an architect in consultation with the Congregation of remodeling the space to our needs.  The sanctuary room will undoubtedly have to be expanded.  But folks are plainly excited about our new home.
I can hardly wait for next Sunday when we will celebrate the real heritage of Martin Luther King, Jr. and Church School resumes.
Posted by Patrick Murfin at 1:10 PM