That Jet Plane Song Always Made Me Want to Cry 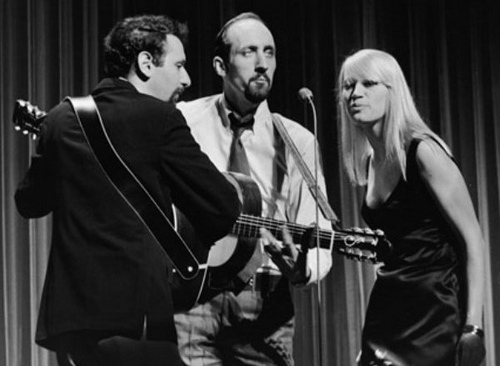 On December 20, 1969 Leaving on a Jet Plane reached No. 1 on the Billboard Hot 100 chart.  Peter, Paul and Mary’s recording was their last hit before they broke up in 1970 and their only time at the top of the charts.  It was also their only single to earn a Gold Record for more than one million sales.
Both the song and the recording had been around for a while.  A youthful John Denver penned the song in 1966 while he was touring as Chad Mitchell’s replacement in the Mitchell Trio.  Denver privately recorded the song under the name Babe I Hate to Go as part of a demo which he sent out as a Christmas present to friends.  The Mitchell Trio’s manager got a copy to Peter, Paul and Mary, who were impressed.  They began to sing it in their live shows, and later added more Denver material to their repertoire.
Early in 1967 the song was released the by Mitchell Trio and by Spanky and Our Gang on their debut album.  Later that year PP&M included it on Album 1700.  It took more than two years for the group’s record label, Warner Bros., to release the song as a single.  Despite another hit off the record, I Dig Rock and Roll Music, executives at the label were convinced that folk music was passé and had been eclipsed by the very music the trio was commenting on in the first release.
Despite the unexpected success of the single, Peter, Paul and Mary broke up to pursue individual careers in 1970 and would not reunite to sing together again until a 1987 anti-nuclear rally.  After that they regrouped several times for tours and to make a series of hugely popular PBS specials.
The success of the song boosted Denver’s struggling career.  He was signed by RCA and released his debut album Rhymes and Reasons in 1969.  But RCA was just as leery of a folk act as Warner’s had been and refused to sponsor a tour in support of the album.  As countless other folk acts had before him, Denver set out alone on a self-organized, haphazard tour of the Mid West.  He didn’t even have an advance man.  He would arrive in a town or college campus and scrounge for a place to play.  He seldom was paid except for the “gate”—the admission cover charge—or the opportunity to sell his records at intermission.  He would show up at local radio stations unannounced and wrangle interviews, had his own flyers printed and personally post them in the area of the performances.
I saw Denver on that tour, at what was probably one of his “prestige” gigs—the Quiet Knight at Sheffield and Belmont in Chicago.  The intimate tour also helped garner Denver a passionately loyal fan base that stuck with him through his career.
The sharp spike in record sales as a result of this effort finally caught the attention of RCA executives, who authorized an official tour and began to put their A&R team behind the record.
The song enjoys another, perhaps unexpected life.  Since the Viet Nam War Leaving on a Jet Plane has been an unofficial anthem for soldiers leaving their loved ones for an uncertain fate on the battlefield.
Posted by Patrick Murfin at 1:25 AM