You Thought it Went Away, Didn’t You? Nope 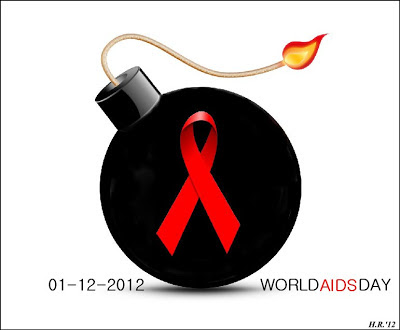 AIDS seems to have been swept off the public agenda in the United States which is why a lot of folks might be surprised to learn that today is International AIDS Awareness Day.  Stifling a yawn they are apt to say, “Really?  I thought that was over."

No, not really.  Although various extremely effective pharmaceutical cocktails have largely eliminated AIDS as an automatic death sentence in this country and most of the developing world, infection rates continue to rise at alarming rates in the Third World, Eastern Europe, and states of the old Soviet Union.  The costs of western treatments are prohibitive and although new low cost treatments have been developed, they are less effective and still unattainable for many.

Sub-Saharan Africa has been and continues to be hard hit.  In some areas whole generations have been nearly wiped out leaving behind another generation of orphans, many of them infected from birth.  With continuing war and famine, large swaths of the continent are being depopulated despite exploding birth rates.

A well publicized, and for many surprising, commitment by President George W. Bush to AIDS eradication in Africa has fizzled despite the expenditure of vast sums.  Right wing politics in the U.S. has blocked use of the funds for education about and distribution of condoms, the proven most successful tool in preventing spread of the plague.  Instead money has been wasted on ineffective abstinence education projects and much has been funneled to religious based charities, many of which have highly questionable agendas.  Instead of combating AIDS, suspected homosexuals have come under attack, persecution, and even the threat of execution in Uganda, despite the fact that in Africa heterosexual transmission is the main driving force behind the epidemic.

Meanwhile international and private funding of a new generation of “cheap” AIDS treatment drugs designed for the Third World lag far behind the overwhelming demand.

In Muslim and conservative traditional cultures in devastated South Asia governments and religious leaders have actively fought implementing policies to stem the spread or treat the victims effectively.

At home a generation has grown up with no memory of the devastating losses to AIDS that brought the issue to the fore-front in the ‘80’s and ‘90’s.  That has caused a lax attitude about prevention among young people at the same time that abstinence only education demanded by the Religious Right has eliminated frank discussions in most public schools.  Despite living in a hyper-sexualized culture, kids are less informed and more apt to make dangerous choices than a decade ago.

And AIDS has ceased to be just the Gay Curse.  Especially in minority communities it is now spread most commonly by heterosexual contact and women are now the majority of victims.  The disastrous American health care system does not make the expensive AIDS treatment in use in this country available to everyone.  For the first time in years, actual AIDS deaths are on the rise in this country.

But you would hardly know it.

International AIDS Awareness Day was the brain child of two public information officers, James W. Bunn and Thomas Netter, working for the Global Program on AIDS at the World Health Organization headquarters in Geneva, Switzerland in 1987.  Program Director Dr. Jonathan Mann approved and set December 1, 1988 as the date for the first observation.

It was Bunn, a broadcast journalist from hard-hit San Francisco, who came up with the date.  The U.S. was then the epicenter of the spreading epidemic.  Bunn knew that the period after the November elections and Thanksgiving but before the full rush of Christmas was a “dead news” time when publicists could expect maximum coverage of a fresh target.  It was also the time of year when Americans were typically open to charitable appeals.

It worked.  Along with the ubiquitous Red Ribbon World AIDS Day, as it came to be popularly known, raised awareness and spread information on prevention.  The first two years focused on children infected with HIV, a decision that angered many in the decimated Gay community.  But by focusing on “innocents” like 14 year old Ryan White of Indiana, the campaign did break through the prejudices of much of the public.

In subsequent years, attention shifted to the Gay community, almost the exclusion of heterosexual transmission and victims.

Meanwhile what was once considered in much of the rest of the world as a degenerate curse on a decadent Western society was becoming epidemic in Africa.

Since 2011 and for the next three years the announced theme of the AIDS Campaign is Getting to Zero, focusing on the prevention of new cases.

Back in the Mid ‘90’s in the boonies of McHenry County we were still finding it a struggle to raise awareness of the epidemic and remove the stigma from the growing numbers of victims in the county.  The Rev. Dan Larsen and our congregation, then known as the Congregational Unitarian Church, were leaders in public campaigns centered on the Red Ribbon and bring panels of the AIDS Quilt to the area.  It was an uphill battle.  The county coroner, a popular Crystal Lake funeral director, had written articles in the local paper blaming the spread of AIDS to shared air on airliners and toilet seats.  Homophobia was rampant in the county and almost all local gays were both closeted and living in fear.

In 1996 World AIDS Day fell on a Sunday—the first Sunday of Advent, as a matter of fact.  Our congregation joined churches around the country ringing its bell as part of the commemoration.  And I composed and read a poem for the Sunday service.  This is it:

We light a candle and await,
await the coming of light and hope,
the promise foretold, fulfilled.

We light a candle and await,
await the pealing of the bells in joy triumphant,
where now they toll in somber mourning.

We light a candle and await,
await the hour of reunion,
prodigal and patriarch alike embraced,
alike forgiven,
all that was sundered made whole again.

We light a candle and await,
await the gifts a million shortened lives
could have wrapped for us
and our delight at their discovery.

We light a candle and await,
await the day the Quilt is at last finished,
can be lovingly folded and nestled in cedar,
and taken out only on cold nights
to wrap us in the warmth of remembrance.

We light a candle and await.

Originally published as AIDS Advent Sunday in We Build Temples in the Heart, Skinner House Books, Boston, 2004
Posted by Patrick Murfin at 2:00 AM